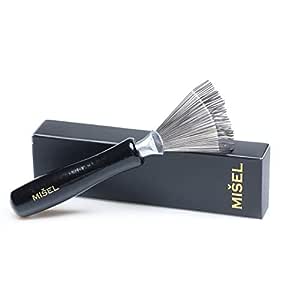 4.0 out of 5 stars
4 out of 5
213 global ratings
How are ratings calculated?
To calculate the overall star rating and percentage breakdown by star, we don’t use a simple average. Instead, our system considers things like how recent a review is and if the reviewer bought the item on Amazon. It also analyzes reviews to verify trustworthiness.

Lynda L.
3.0 out of 5 stars Plus/Minus
Reviewed in the United States on April 24, 2018
Verified Purchase
Like some other buyer/reviewers, I was hoping for a product as efficient as the Tool Structure hair brush cleaner I purchased from Sally Beauty that is no longer available. However, this brush cleaner has some good qualities. On the plus side, this brush cleaner matches (or slightly exceeds) the length of the Tool Structure item. The handle is approximately 5 inches long. It's sturdy and easily gripped for cleaning. The juncture where the metal tines are attached appears to be secure also. However, there is a down side ... the metal tines are made of a very thin and poor quality metal that easily reverses position during the cleaning process. In fact, when I first removed the brush cleaner from the box many of the metal tines were matted up and many were turned backward. I used the brush cleaner once and it worked OK, but I am concerned about the quality of the tines and their durability with continued usage. If the metal tines were a more durable quality, this would be an EXCELLENT item, equal to or exceeding the Tool Structure item that has proved to be very effective. Alas, this is not the case.
Update 11/16/18 ... I've used the product for several months now, and it's usefulness continues to deteriorate. The tines have become very entangled and have to continually be re-aligned. And, as originally reported, the tines are very brittle and tend to prick your finger unless you are wearing gloves. The size and feel within my hand is excellent. Were the strength of the wire tines stronger, it would be an excellent product. That, however, is not the case. I will soon need to purchase another wire brush, but I will not buy this one again.
Read more
34 people found this helpful
Helpful
Comment Report abuse

sargant
2.0 out of 5 stars Tangled
Reviewed in the United States on December 12, 2018
Verified Purchase
As a kid we had a similar brush cleaner made by Fuller Brush. This looks a lot like it, but the wire is much thinner. Therefore they are bent in all directions.. the one I was used to all was going in the same direction and very effective.
Read more
11 people found this helpful
Helpful
Comment Report abuse

LS
2.0 out of 5 stars Does clean a brush the first time, but....
Reviewed in the United States on August 29, 2018
Verified Purchase
Unfortunately, this brush cleaner is not very durable. After the very first use most of the fine metal prongs were twisted in all directions, and impossible to straighten out again. They are also very sharp. I pricked my fingers twice quite painfully, while I attempted to get this gadget usable for a second time....
Read more
9 people found this helpful
Helpful
Comment Report abuse

Chidanand W
2.0 out of 5 stars Cleans Ok, BUT The Tines ALWAYS Twist & Tangle Out Of Line
Reviewed in the United States on October 3, 2019
Verified Purchase
Update 10-23-2019:
I misspoke. Now that I have teh significantly better old Fuller Brush tool, I returned the Misel today. I took it to a Kohls where they handle the returns. The woman asked what was wrong with it. On seeing it when I just opened the box, she exclaimed "Oh My God! That's useless!"

I'm leaving 2 stars only because if one is willing to straighten the tines every time it gets used, it does ok. And I don't know of another brush cleaning tool currently being made which actually looks like it would job.
Update 10-22-2019: 2 stars
I was able to mostly straighten the tines on the Misel, except for 2, but that took quite a bit of time, a lot more than required to clean the brush. And after using the Fuller Brush tool, it seems nuts to have to straighten/fix the tool each time to keep it useful.

NOTE: as far as I'm aware, at this writing, the Fuller Brush Tool is no longer made. But, I actually managed to find one at a resale shop in really good condition. Works just as well as mom's and no need to straighten twisted tines.

So now I feel the Misel is a decent tool, but significantly less good than the old Fuller Brush Tool. So now that I have an old reliable Fuller Brush Tool, this one will be retired. It sure would be nice not having to straighten the tines every time I use it.
Judge for yourself.
---------------
Update 10-18-2019: 3 stars
I've had this tool just over 2 weeks now and used it several times. I discovered that, after cleaning the brush, I could mostly straighten the tines by dragging the tool backward through the brush. Which is a bit of a nuisance, but doable.

So I decided to just clean the brush several times to see how it fared without the tine straightening. After cleaning the brush 3 times, the tines were really twisted such that it was hard extracting the hair from the tool (see the picture showing the Misel Tool next to the hairbrush).

Then I decided to try cleaning the brush using the similar Fuller Brush Cleaning Tool my mom has used for literally years. It cleaned the brush equally well, but the tines were fine afterward (see the photo of the 2 tools side by side).
--------------
Original post: 5 stars
Just arrived. Used it on a brush badly clogged with hair. Dragged it ALL out in no time. I was very surprised.
2 or 3 of the tines bent/twisted to the side, but there was a huge wad of hair it wrested from that brush.

jacqueline Bower
5.0 out of 5 stars Really love this little tool
Reviewed in the United States on April 17, 2018
Verified Purchase
Really love this little tool. It's quite elegantly designed and was just what I needed to clean my matching MISEL brush, as well as my Mason Pearson brush. I suspect some of my other brushes as well. The bristle brushes are very healthy for the hair and scalp but the one set back can be the buildup of hair and lint. So this was a great added purchase. I do recommend :)
Read more
7 people found this helpful
Helpful
Comment Report abuse

D
5.0 out of 5 stars Does what it says
Reviewed in the United States on January 18, 2019
Verified Purchase
I didn’t know that hair brushes attract lint like a magnet. At first I saw that the bases of each group of bristles had some dark matter. At first I thought it was mold. Then I took a sharp pair of tweezers and dig into a bristle and was amazed that it was a huge chunk of lint. I pretty much destroyed my very nice hair brush after digging threw most of it this way. Then I did some research online. Turns out there is a tool for this. While most of the lint was already removed from my brush. I tested out this product and it does the job. Very small amounts of lint came off including stray hairs that the brush cleaner didn’t get. So it’s a pass. 👍
Read more
2 people found this helpful
Helpful
Comment Report abuse

Doty15
5.0 out of 5 stars Easy brush cleaner
Reviewed in the United States on December 26, 2018
Verified Purchase
Everyone needs one of these, you pull out the hair from your brush by pulling down and turning your brush to get all the old hair out then a simple shampoo to clean your brush with out the nasty hair in it. very cool idea
Read more
4 people found this helpful
Helpful
Comment Report abuse

Kaitlin Hammerstein
5.0 out of 5 stars Good little cleaner
Reviewed in the United States on May 30, 2019
Verified Purchase
I never knew a product like this existed till now! I have always struggled with lint/hair build up in my brushes and just pulled it out but could never get my brush fully cleaned with this method. This little cleaner really helps to keep my new Misel brush nice and clean from buildup. So far liking it, its small and nicely designed and gets the job done.
Read more
4 people found this helpful
Helpful
Comment Report abuse
See all reviews

Page 1 of 1 Start overPage 1 of 1
This shopping feature will continue to load items when the Enter key is pressed. In order to navigate out of this carousel please use your heading shortcut key to navigate to the next or previous heading.
Back
Next
Pages with related products. See and discover other items: hair combs and brushes