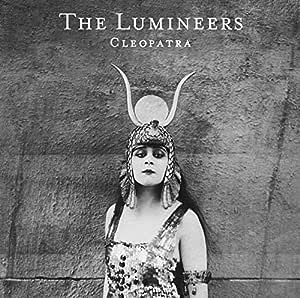 The Lumineers Format: Audio CD
4.8 out of 5 stars 839 ratings
Amazon's Choice recommends highly rated and well-priced products.
Amazon's Choice for "lumineers cd"
See all 7 formats and editions Hide other formats and editions
Includes FREE MP3 version of this album.&nbspProvided by Amazon Digital Services LLC. Terms and Conditions. Does not apply to gift orders.&nbspComplete your purchase to save the MP3 version to your music library.
Available at a lower price from other sellers that may not offer free Prime shipping.

NOTE: Item is an 11 track release. The bonus tracks are digital only.

It took four years for The Lumineers to follow up their platinum-plus, multi-Grammy-nominated, self-titled debut – which spent 46 weeks on the Billboard 200 and peaked at #2 -- but Cleopatra is well worth the wait. After exploding onto the scene with their monster single, “Ho Hey” (which spent a staggering 62 weeks on the Billboard Hot 100, peaking at #3) and its follow-up, “Stubborn Love” (recently featured on President Barack Obama’s Spotify playlist), The Lumineers spent a solid three years touring six of the seven continents. During that time, The Lumineers – whose original members Wesley Schultz and Jeremiah Fraites founded the band in Ramsey, New Jersey back in 2002 -- earned a pair of Grammy nominations (Best New Artist, Best Americana Album), contributed two songs to The Hunger Games franchise (including the hit Jennifer Lawrence/James Newton Howard collaboration, “The Hanging Tree”) and sold an impressive 1.7 million albums in the U.S., and 3 million worldwide. Cleopatra proves Schultz and Fraites – along with cellist/vocalist Neyla Pekarek– are neither taking their good fortune for granted, nor sitting back on their laurels. With the help of producer Simone Felice (The Felice Brothers, The Avett Brothers), the man Wesley calls “our shaman,” the band ensconced themselves in Clubhouse, a recording studio high atop a hill in rural Rhinebeck, N.Y., not far from Woodstock. The Lumineers then set about trying to make musical sense of their three-year-plus roller coaster ride. Their skill at setting a visual story to music comes through amidst the delicate, deceptively simple acoustic soundscapes. This time, though, bassist Byron Isaac provides a firm, low-end on the apocalyptic opener “Sleep on the Floor,” a ghostly tune about getting out of town before the “subways flood [and] the bridges break.” It’s a densely packed, cinematic song that echoes Bruce Springsteen’s “Atlantic City” and John Steinbeck’s East of Eden – which were models for the record alongside Bob Dylan, Leonard Cohen and Jack Nicholson in One Flew Over the Cuckoo’s Nest. Cleopatra also deals with what Wesley terms “the elephant in the room,” the band’s success and the way it can sometimes put a target on your back. The syncopated piano rolls in “Ophelia” (“I got a little paycheck/You got big plans/You gotta move/I don’t feel nothin’ at all”), the organic sound of fingers squeaking on guitar strings in “Angela” (“The strangers in this town/They raise you up just to cut you down”) and the Faustian bargain described in “My Eyes” (“Oh, the devil’s inside/You open the door/You gave him a ride/Too young to know/Too old to admit/But you couldn’t see how it ends”) consider the perils of getting what you wish for, with everyone knowing your name, and your songs. The band had total artistic freedom in writing and recording the album, so Wesley and Jer pushed the envelope on experimental tracks like the stream-of-consciousness, purposely lo-fi “Sick in the Head,” the yearning, piano chord build-up of “In the Light,” or the closing orchestral instrumental, the aptly titled coda, “Patience.” “We continue to make the kind of records we want to,” says Wesley. “We believe in this music. It’s a true labor of love. We just want to keep reaching more people with our songs.” Given the evidence on The Lumineers’ eagerly anticipated sophomore album Cleopatra, that shouldn’t be a problem.

›
Visit Amazon's The Lumineers Store
for 9 albums, discussions, and more.

Page 1 of 1 Start overPage 1 of 1
This shopping feature will continue to load items when the Enter key is pressed. In order to navigate out of this carousel please use your heading shortcut key to navigate to the next or previous heading.
Back
Next
Pages with related products. See and discover other items: ben harper and the innocent criminals, Body Wears, Explore teas for health