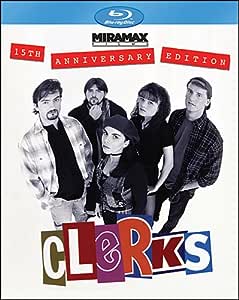 $45.00
+ Free Shipping
Sold by: Rasputin Music & Movies
Have one to sell?
Sell on Amazon

This fully loaded 15th Anniversary Edition of Kevin Smith's legendary directorial debut is the one to own. Even more outrageous on Blu-ray and complete with new bonus material it's the most brilliant and uncompromising presentation yet. CLERKS is one wild day in the life of a pair of overworked counter jockeys whose razor-sharp wit and on-the-job antics give a whole new meaning to customer service. With hilarious bonus features you should just plunk down your effin' cash now and add this to your collection of great movies.

Before Kevin Smith became a Hollywood darling with Chasing Amy, a film he wrote and directed, he made this $27,000 comedy about real-life experiences working for chump change at a New Jersey convenience store. A rude, foul-mouthed collection of anecdotes about the responsibilities that go with being on the wrong side of the till, the film is also a relationship story that takes some hilarious turns once the lovers start revealing their sexual histories to one another. In the best tradition of first-time, ultra-low budget independent films, Smith uses Clerks as an audition piece, demonstrating that he not only can handle two-character comedy but also has an eye for action--as proven in a smoothly handled rooftop hockey scene. Smith himself appears as a silent figure who hangs out on the fringes of the store's property. --Tom Keogh

4.7 out of 5 stars
4.7 out of 5
2,329 global ratings
How are ratings calculated?
To calculate the overall star rating and percentage breakdown by star, we don’t use a simple average. Instead, our system considers things like how recent a review is and if the reviewer bought the item on Amazon. It also analyzes reviews to verify trustworthiness.

Kay
5.0 out of 5 stars A (US) Comedy Classic
Reviewed in the United States on December 28, 2018
Verified Purchase
If you love self-deprecating humor with '90s mild crude jokes and simplistic production, you'll love Clerks. Imo, it's Kevin Smith's 2nd best film (Mallrats being #1). The dialogue is witty and aware and even though the lead takes himself WAY too seriously, the film doesn't and that's the point. The acting is good and majority of the jokes land (and have aged well) too. Can't speak on the extras though seeing as I didn't watch them but I can tell the improved quality (vs. DVD/streaming).
Read more
6 people found this helpful
Helpful
Report abuse

joel wing
TOP 500 REVIEWER
3.0 out of 5 stars Doesn't hold up after good start
Reviewed in the United States on July 22, 2020
Verified Purchase
Clerks was Kevin Smith’s breakthrough independent film about two friends Dante Hicks (Brian O’Halloran) who works at the Quick Stop and Randal Graves (Jeff Anderson) who is next door at the video shop. Because the movie was made on a shoestring budget almost the entire story takes place at the counters of the two shops and focuses upon funny and inane conversations.

An example of the experiences the two clerks run into is a man who stops every person that goes into the Quick Stop to buy cigarettes. He pulls out what he claims is a person’s lung that has been decayed because of smoking cigarettes. He gets a small mob together and threatens to shut down the Quick Stop because it’s pedaling death sticks. It’s then revealed that he works for a gum company. Another time a woman with a small child asks Randal if he’s got a cartoon movie for her daughter. He tells her to wait as he has to place an order with a distributor. He then runs off a number of adult film titles right in front of the little kid.

The problem is what starts off as a quirky comedy eventually runs its course and starts getting dry with just a few exceptions. The conversations aren’t as interesting except for one scene involving Dante’s ex-girlfriend.
C

JKTop Contributor: Pets
VINE VOICE
5.0 out of 5 stars Classic
Reviewed in the United States on December 28, 2017
Verified Purchase
This has got to be one of my favorite movies of all time. I ended up getting this as a gift for my 17 y/o, solely to see her reactions. Needless to say her reactions were priceless and she actually put down her phone to watch. What does it say about a movie when a teen puts down their phone?!?
Read more
5 people found this helpful
Helpful
Report abuse

Grust
5.0 out of 5 stars The Film That Started It All
Reviewed in the United States on August 21, 2014
Verified Purchase
This is the review I gave this film on tv.com

The View Askewniverse is one of the best comedy film series around. The first film Clerks, was the vision of Kevin Smith who maxed out credit cards and even sold his comic book collection to see it through.

The film is about Dante Hicks who has to work at Quickstop Groceries on his day off. He interacts with his best friend Randal Grave who works at RST Video and often messes with customers. And of course this film introduces Jay and Silent Bob, one of the greatest comedy duos around.

Over the course of the film, Dante has to deal with a chewing gum representative making an anti-smoking campaign, playing hockey on the roof, going to an ex-girlfriend's funeral, dealing with annoying customers, dealing with his ex-girlfriend Caitlin Bree getting married to an Asian design major, and his feelings for his current girlfriend, which ends with Caitlin accidentally having sex with a dead man and his girlfriend dumping him.
Read more
4 people found this helpful
Helpful
Report abuse

Studio Creations
5.0 out of 5 stars Clerks Bluray!
Reviewed in the United States on December 16, 2012
Verified Purchase
Wow, I thought you couldn't get much better than the LaserDisc version of Clerks in quality, strictly because the original movie was shot on grainy 16mm film, but, I was totally wrong. This Blu-ray version really shows Dave Kleins cinematography in rich new detail that really helps a viewers appreciation of Clerks.

The extras on the Bluray were chock full of stuff too, which is totally expected of a Kevin Smith release, but I think they could have mined some of the fan-created material to give the viewer a sense of impact that Clerks had on society and the cinema-world as a whole. Eh, maybe a 20th Anniversary release we'll see that. :)

All in all, whether you are a first time viewer or a long time fan of Clerks, this Blu-ray release of Clerks is totally worth a purchase.
Read more
3 people found this helpful
Helpful
Report abuse

Ron
5.0 out of 5 stars The movie from that guy in your Google feed!
Reviewed in the United States on April 20, 2019
Verified Purchase
Kevin Smith, you know the guy who's always in your Google feed with a new theory about Star Wars or The Avengers, well that guy made a movie once...along time ago in a galaxy far, far away...New Jersey! So if you are curios about THAT dude...then this is where you start!
Read more
Helpful
Report abuse

Sometimes known as Tai, sometimes not.
4.0 out of 5 stars Definitely worth the money -- the first DVD I ever bought
Reviewed in the United States on October 22, 2001
Verified Purchase
(Insert all general, well-deserved, and standard superlatives about Kevin Smith and "Clerks" here).
As for the DVD itself, a hallmark of ANY DVD with Kevin's name on it is the excellent value for your money -- you get not only the movie, but many concominant "bonus features" that are fantastic enough to warrant purchasing the DVD on their presence alone.
Another guaranteed feature of any Kevin Smith DVD is the "commentary" section (although there's one minor criticism I have on this point). Kevin, who invariably has many people connected to the movie (on-screen and off), leads a VERY funny running commentary (this applies not only to "Clerks," but any DVD). Side stories, heads-up pointers, and general analysis are all peppered with funny and insightful thoughts. One feels almost as if you were watching a favorite movie with a bunch of friends who are making an effort to ensure that you're in on the joke.
(Minor criticism time: One (unfortunate) side effect of a KS doing DVD commentary is his habit of naming what seems like each and every actor who appears on screen, no matter how minor. It can have the effect (and at times did have the effect on the Clerks DVD) of making it feel like you were watching a home movie. I don't care that the guy who watched Lenin's Tomb take a sandbox break owned the theater where auditions were held, nor that his wife played opposite Jeff Anderson's famous "I don't appreciate your ruse" scene. Still, it's a VERY minor point in the whole big scheme of things, although I note that Kev's still doing it even as recent as the Clerks: Animated Series DVDs (those are even funnier than the "Clerks" DVD, by the way)).
Whew. Ok, I'm done now, which leads me to wonder why I'm still typing. I'll just click something now.
Read more
4 people found this helpful
Helpful
Report abuse
See all reviews

Elleppi
4.0 out of 5 stars A precious special edition of the film that celebrates untalented people, that are truly funny and funnily true.
Reviewed in the United Kingdom on September 8, 2015
Verified Purchase
Maybe the first, best and only film about young/adult nerds in nowhere american town ever done. Clerks is a perfectly balanced story of explicit silly humor and postmodern philosophy, of realism and surrealism, that coming from everyday genuine and nonsense dialogues as well as from outsiders and common people with peculiar and unexpectedly original points of view on life.
Clerks is the celebration of people with no talent or ambition, but truly funny and funnily true.
Read more
4 people found this helpful
Report abuse

si
4.0 out of 5 stars Classic Indie Film
Reviewed in the United Kingdom on October 25, 2014
Verified Purchase
Great indie film from the great Kevin Smith. Loads of interesting ideas and plenty of foul language as we enter the lives of Dante and his best buddy and pain in the neck Randell.

One day at the Quick Stop store as Dante's life gets flipped around and Randell does everything he can to upset every person who comes into the store.
The ordering of the videos had me crying with laughter.

DO NOT ORDER IF BAD LANGUAGE OFFENDS YOU!
Read more
Report abuse

The Emperor
5.0 out of 5 stars Comprehensive
Reviewed in the United Kingdom on November 18, 2010
Verified Purchase
I love Clerks but it is the type of film that you can understand why some people hate it.
There are a lot of extras with this. The documentary about the film was very interesting and it was good to see the original ending and also get a new commentary on the film.
At the talk given to celebrate its 10th anniversary it was interesting to see just how many fans there looked just like Kevin Smith.
Read more
Report abuse

The Mikeybumster
5.0 out of 5 stars A landmark movie in its definitive edition
Reviewed in the United Kingdom on April 7, 2018
Verified Purchase
Clerks is one of the seminal films of the 1990s and this tenth anniversary DVD is packed full of extras spread across three discs. Arguably this edition is one for the fans but the film itself is essential viewing for film aficionados.
Read more
One person found this helpful
Report abuse