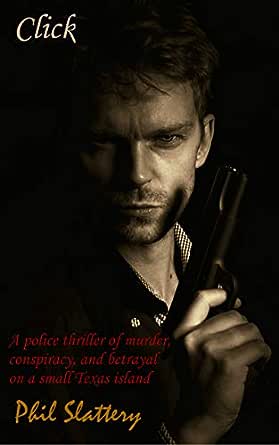 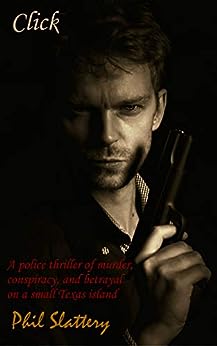 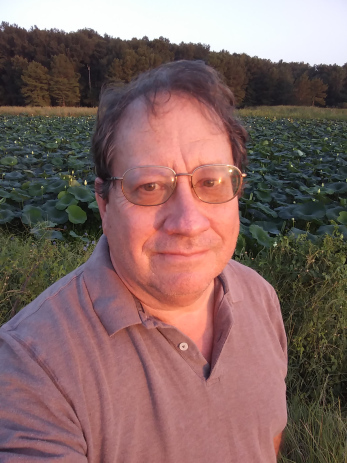 Reader Charles Stacey gave "Click" five stars and commented: "Author has a wonderful ability to develop the characters using few words. Great foreshadowing to build suspense. And then a really outstanding twist at the end that left me smiling."

Amazon reader Edward Z gave Click  five stars and commented:
"A policeman on leave on a secluded island after shooting an unarmed man with a toy gun finds himself under siege by two criminals looking to use the place themselves...

"A lot of detail goes into both the psychological aspects of the story as well as the action. This one is packed with every character's motives, inner dialogue, and very well thought out. When it gets to the action it keeps this up as well as adding a lot of excitement.

"Smart, fast-paced, and full of action. The characters are well done and don't suffer from the usual boring tropes too much, and the two criminals are interesting as the author knows how to do 'bad guys' rather well."

Joe Leonardi of shortstoryscribe.com gave Click five stars on Amazon and on his website commented:
"Author Phil Slattery takes us on an interesting ride. He gives a twist ending to the story, that once revealed, you realize he peppered the story with clues. The second twist ending hits out of left field, and left this reader wanting for more.

"The motivation is as old as storytelling, but that doesn't make it bad.  Slattery's words make us care for the main character and seeing his view of his marriage leave us, in the end, feeling sad for him in his moment of triumph."

On Goodreads, Vicki Holmsten gave Click four stars and commented:
"This novelette is a quick and very entertaining read. It opened with a grabber ("Tell me again whey we have to kill this guy...") and kept pulling me in from there. Frank Martinez is a cop trying to recover from a shooting incident in solitude on an island off the Texas gulf coast. T.J. and Benny are the bad guys. Their hunt and chase on the small island kept me in suspense. It ends with a surprise twist. Slattery proves here he is a good storyteller."
--This text refers to the paperback edition.

Frank Martinez is a south Texas police officer, who has retreated to a small island to recover from the guilt of having killed an unarmed man while the incident is under review by the department. One night, after falling asleep in a lounge chair in the yard, he awakes to find two well-armed but unknown men sneaking onto the island to kill him, but he doesn't know why. Unfortunately, his gun is in the bedroom. Now he must get it before they find him. --This text refers to the paperback edition.

The Laguna Madre is a large, hypersaline lagoon that lies between the mainland ofsouthern Texas and Padre Island.  Itcontains many islands, most man-made from the spoils of dredging, and a fewnatural.  On many of these islands,people have built small cabins for those times they can escape the mania of themodern world and relax in seclusion, fishing for red drum, sea trout, andnumerous other game fish.  When I lived in Corpus Christi, TX, and worked on Padre Island, I oftenobserved these islands from ashore and wondered about what other purposes, especially nefarious ones, couldthey serve.  I based this tale on my conjectures and on my experiences with the local culture.  At first, I conceived of it as a short story, but as I worked on it infrequently over the years, it grew on its own.  When I finally considered it finished, I published it as a novelette.  Looking back, I can see where I should have expounded a little more on some details, but I think it is an enjoyable read as is. --This text refers to the paperback edition.

Phil Slattery is anative of Kentucky, but has traveled widely.He has a B.A. in German and Russian from Eastern KentuckyUniversity.  He lived in the beautifulcity by the bay, Corpus Christi, from 1993 to 2011.  He started writing (poetry) while in the Navyduring the late 1980's.  Over time he hasturned to fiction, mostly dark, and intends to take up writing full time afterhe retires. Except for those works found on Amazon, most of his published works have been short stories,most of which can be found on the Internet. In 2015, Mr. Slattery founded the Farmington (New Mexico) Writers Circle, whose purpose is to help local authors explore new means of publicizing and marketing their works. Mr. Slattery's website isphilslattery.wordpress.com and his Amazon author's page is at amazon.com/author/philslattery.  He can alsobe found at Facebook.com/philslattery201, Twitter.com/philslattery201, and on various other social media such as LinkedIn and Tumblr. --This text refers to the paperback edition.
Read more