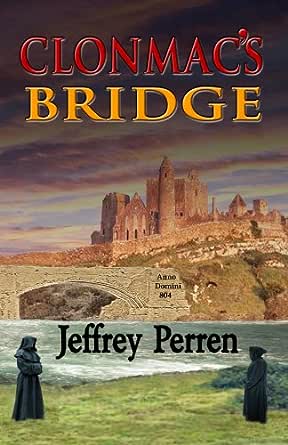 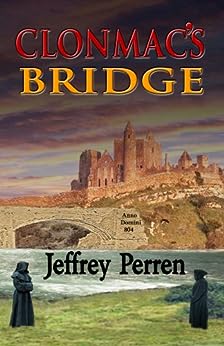 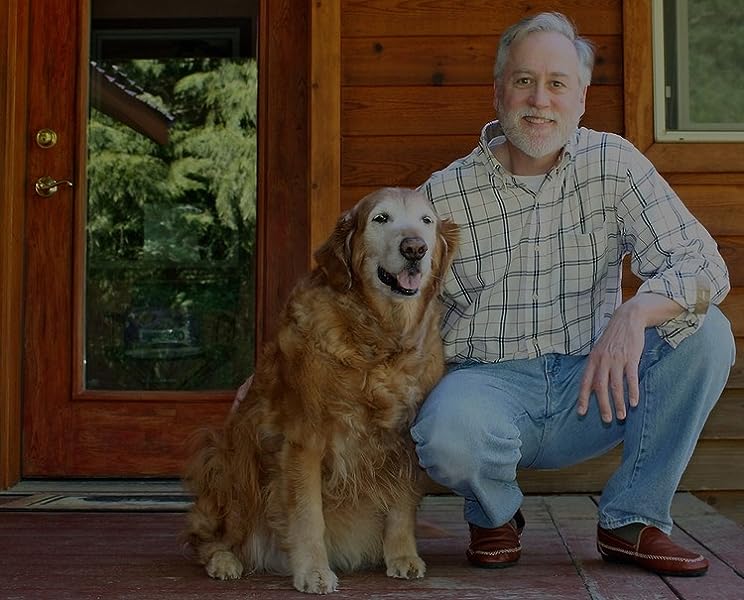 Jeffrey Perren wrote his first short story at age 12 and went on to win the Bank of America Fine Arts award at 17. Since then he has published numerous short stories and three highly-praised novels.

3.9 out of 5 stars
3.9 out of 5
29 customer ratings
How does Amazon calculate star ratings?
Amazon calculates a product’s star ratings based on a machine learned model instead of a raw data average. The model takes into account factors including the age of a rating, whether the ratings are from verified purchasers, and factors that establish reviewer trustworthiness.
Top Reviews

Bonnie Ramthun
5.0 out of 5 stars A thoughtful and engaging archeological mystery
Reviewed in the United States on December 27, 2015
Format: Kindle EditionVerified Purchase
I love archeological mysteries so when I saw "Clonmac's Bridge" I had to pick it up and read it. This is not a swashbuckling Indiana Jones tale but a very compelling and complicated tale of two men -- one, Griffin Clonmac, a dedicated archeologist, and the other Riordan, a Catholic Monk and architect who built the Clonmacnoise Bridge in the year 804 AD.

There are plenty of edge-of-your-seat moments in this story and the love interest, Mari, is no wilting damsel in distress. She's as fierce and dedicated as Griffin and their romantic involvement feels very real and engaging. The modern mystery of Griffin's attempts to find and raise the mysteriously preserved Clonmacnoise Bridge is juxtaposed with the story of Riordan, the Monk who built it in 804 AD. The descriptions of ancient Ireland and the lives and politics of Riordan's monastary are beautifully described. The author paints a picture of this long-ago Ireland that is so immediate that the reader feels transported there.

This is a complicated novel that really needs some dedicated time, but the result is a wonderful book of intrigue and history that I enjoyed very much. I highly recommend this novel.
Read more
2 people found this helpful
Helpful
Comment Report abuse

John
5.0 out of 5 stars He is matched with a beautiful Peruvian and they share the adventure of locating a ...
Reviewed in the United States on September 25, 2014
Format: Kindle EditionVerified Purchase
With "Clonmac's Bridge," Jeffrey Perren has produced a novel which satisfies on several levels: romance, adventure, mystery, and history.

The protagonist is an American archaeologist driven to make a discovery. He is matched with a beautiful Peruvian and they share the adventure of locating a 1200-year-old bridge.

The antagonists are several cover-up scammers intent on stopping the discovery.

The setting is Ireland, which we view from a modern-day perspective and a historical perspective.

The novel should be particularly enjoyable to fans of Ayn Rand since the themes are similar.

I highly recommend this novel and I look forward to more from the author.

Peter Cresswell
4.0 out of 5 stars Jeffrey Perren gets better with every outing.
Reviewed in the United States on March 25, 2014
Format: Kindle EditionVerified Purchase
Jeffrey Perren gets better with every outing. If you think a novel about the discovery of a mediaeval Irish bridge sounds a little uncompelling, boy have you got a surprise in store. An expertly woven tale gives us all the drama --and conflict -- a romantic thriller needs, and more.
I'm looking forward eagerly now to Mr Perren's next one...
Read more
3 people found this helpful
Helpful
Comment Report abuse

OE-Runwita
3.0 out of 5 stars OK .....
Reviewed in the United States on July 31, 2014
Format: PaperbackVerified Purchase
Ok, but writing lacks the complexity of many other books in the genre.
Read more
One person found this helpful
Helpful
Comment Report abuse

Aly
4.0 out of 5 stars Great Archaeological Book
Reviewed in the United States on May 4, 2014
Format: Kindle Edition
Jeffrey Perren is not afraid to jump right into the interesting things. And it shows in his book, Clonmac's Bridge. All we know at the beginning is that there is a discovery that Griffin has been looking for a long time. And one that he is willing to go to any lengths to discover. But we slowly uncover what he is looking for and the many different methods he takes to get there. The writing of the story was almost flawless and it was effortless to read.

Not only that but the characters of Griffin and Mari are quickly ones that you can't help but root for. You find yourself hoping that they will be able to succeed no matter the roadblocks that are brought before them and without too much personal loss. The point of view that we are given as third person, it isn't hard to get some kind of insight into their characters, ones that go a long way to reassuring the reader that they are truly good and just curious as all who are involved in history must be.

Then we also get into the deep politics that can take place anywhere and everywhere. Frankly I found this most interesting. Mainly because delving into the human psyche is always interesting and finding out people's motives is one that is intriguing. It's hard to know how people tick and yet we also get to see that in Clonmac's Bridge. The politics also helped to keep things jumping and moving. It was interesting to see how things played out and yet remain not involved. I felt as if I was casually watching a masterful chess game, one that had no clear ending in sight.

There is a bit of a voyage into the past as well. One that is seamlessly made and yet you know that you've gone back into the past, mostly with the names of characters or actions they're participating in. But it's kept interesting by the dialogue and finding out what has taken place in the past that could possibly affect the future. It was well done and a good move on the part of Jeffrey Perren.

Clonmac's Bridge was intriguing, and a book that I would recommend to any of my friends.

Find this review and many others on Reading Shy With Aly(http://readingshy.blogspot.ca/)
Read more
2 people found this helpful
Helpful
Comment Report abuse
See all reviews from the United States

Cathy
4.0 out of 5 stars Good story
Reviewed in the United Kingdom on August 16, 2014
Format: Kindle EditionVerified Purchase
Clonmac's Bridge is partly historical fiction but it also has a multi-faceted plot which centres on T.V. Archaeologist, Griffin Clonmac, who has an overwhelming desire to find and raise the mythical and mysterious ninth century Bridge at Clonmacnoise.
The novel explores a variety of relationships between several of the main characters and in addition there are corporate jealousies, academic rivalries and political ambitions.
On the whole the main characters are a set of selfish, self-centred people who are motivated by pride, greed, lust and self-interest. Even the two main protagonists, Griffin Clonmac and Mari Quispe, the romantic leads, struggle at times to put their feelings for each other before their desires to be in control.
The historical part of the novel could almost stand-alone but it provides a satisfying explanation for the mysteries of The Bridge which is held back until the end of the novel thus creating a strong finale for the book.
I enjoyed reading Clonmac's Bridge and once again admired author Jeffrey Perren's ability to get the reader to suspend disbelief and travel with him across continents and back through centuries in pursuit of a good yarn.
Read more
One person found this helpful
Helpful
Sending feedback...
Thank you for your feedback.
Sorry, we failed to record your vote. Please try again
Report abuse

D. Eadsforth
5.0 out of 5 stars An enjoyable and compelling archaeological adventure
Reviewed in the United Kingdom on September 16, 2014
Format: Kindle EditionVerified Purchase
‘Clonmac’s Bridge’ is Jeffrey Perren’s best novel to date. (I had intended to take it to read on holiday but, after sampling the first few pages, just kept on reading.) The story starts placidly enough with two maverick archaeologists pushed together on a quest to locate and excavate a medieval bridge that used to span the River Shannon in Ireland. However, a veritable shower of adverse forces is unleashed on the project. The lead archaeologist, Griffin, is on a constant, and seemingly futile, search for funding, while his colleague, Mari, the daughter of a Peruvian millionaire of many shady connections, tries to help while juggling a delicate balance between her father and her playboy ex. The central question is: why should so many people be motivated to prevent them from finding the bridge? Why should one of the team be murdered at the outset of the project? Between the Machiavellian manoeuvres of: the Church, a large corporation, academia, the press, and Mari’s father – all of which have their own reasons for wanting the project to fail – an answer must be found. Flashbacks to the time of the building of the bridge provide an additional and exciting flavour.

Jeffrey Perren’s narrative is light, fast, and amusing, and his revealing of the complex, and ingenious, thoughts and deeds of each of his main characters is a positive delight, with a sparky dialogue featuring throughout. The solution, when it comes, reveals all in a most satisfactory manner.
Read more
One person found this helpful
Helpful
Sending feedback...
Thank you for your feedback.
Sorry, we failed to record your vote. Please try again
Report abuse

preschool teacher
2.0 out of 5 stars Dissapointed
Reviewed in Spain on August 25, 2015
Format: Kindle EditionVerified Purchase
I was suprised after reading the reviews. I kept wondering did they get a different version of the book? Maybe I got a version of everything that was edited out: It was really difficult to get through. Most of the book (about 75%) is about getting funding for the excavation, and it goes on, and on, and on.... The bits from the past were good, and the little bit of excavating was good.
Read more
Helpful
Sending feedback...
Thank you for your feedback.
Sorry, we failed to record your vote. Please try again
Report abuse