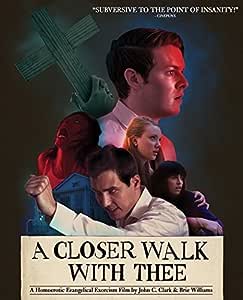 A Closer Walk With Thee [Blu-ray]

A Closer Walk With Thee mixes exorcism, homoeroticism and evangelistic angst in a combo that clearly doesn't cater to the Sunday School crowd --Parade

A Closer Walk With Thee is like what would happen if someone handed Todd Solondz an exorcism script and said, 'Knock yourself out.' --Cinepunx

3.2 out of 5 stars
3.2 out of 5
46 global ratings
How are ratings calculated?
To calculate the overall star rating and percentage breakdown by star, we don’t use a simple average. Instead, our system considers things like how recent a review is and if the reviewer bought the item on Amazon. It also analyzes reviews to verify trustworthiness.
Top reviews

Robby
4.0 out of 5 stars Intriguing and and I don't know, but I liked it.
Reviewed in the United States on October 2, 2018
Verified Purchase
I heard about this movie while listening to a podcast called Dead for Filth when the host was interviewing the two story developers/directors. I had previously thought I wouldn't like this movie but was convinced to give it a try after the interview. I am glad I did! Yes this movie is low-budget and some of the acting is a little...much (especially from the ginger girl) but over all I thought it was great. The not so subtle homo-eroticism is contrasted by the deep external and internal loathing of the evangelic beliefs of this group trying to start and inner-city mission. On top of all that there are demon possessions!
For some reason Amazon lists this as a horror comedy, it is not. It is horror, there are some parts post-religious people could find funny, but most of it all is sad. What the main character is dealing with and the context in which he has to deal are terrible and all to real.

**Spoilers**
The pastor/mission leader (Eli) is HOT and he knowingly flirts mercilessly with the obviously gay main character (Jordan), as the story progresses I got the opinion that the pastor had quite a bit of an ego problem due to his domineering dad and would manipulate the affections of the gay character to make him feel better about himself...then the exorcisms start. The exorcism of Jordan (to get out either the gay demon or the lust demon) by Eli both the first and second time was borderline erotic. There is quite a bit of S&M dominance and submissive language posturing going on and it was kind of oddly hot. It all comes to a quite end when Eli tells Jordan "I forgive you", yes Jordan/the demon did something very terrible but so did Eli but the thought for him to apologize obviously never occurs. There are so many levels to this movie and I thought it was great. Not every movie has to cost a billion dollars to entertain and get one to think a bit.
One thing I wish were cleared up though: Was the demon making Jordan gay or was it making him lustful? I honestly think it was the latter. I think Jordan would be gay either way and the demon that possessed him just made him start to act on those feelings he had.

richard leclerc
5.0 out of 5 stars i'm not moved by much ...
Reviewed in the United States on December 14, 2019
Verified Purchase
the l,A . , complete with a quite realistic M13 member , was spot on ; ( Compton ?) & the acting
was great ; except for the pudgy ginger girl , who was a train wreck.
the young minister was an excellent passive/aggressive sex object ; not subtle flirting to make up
for his verbally abusive , strong father (?) the portrayal of Jordan was perfect. the youngest , very naïve ,
missionary gave just the right amount of well-meaning relief to keep the tension simmering.
(SPOILER ALERT!) I must confess to laughing & applauding wildly when the holier than thou frump in the
blue dress gets slaughtered. the paralyzing dimness of these do-gooders was the catalyst for so much misinformation ,
pain & harm. Christians behaving in the least Christian manner imaginable. ( reminding me of the horrific ,
condescending , desperate idiocy of Nancy Pelosi.) an extremely good job & an extremely good film.

Boise Reviews
3.0 out of 5 stars How religion damages people
Reviewed in the United States on April 6, 2019
Verified Purchase
The entire point of this movie is to show in graphic detail, how religion (especially fundamentalism) damages and scars people. In this case, young people. The creators showed quite effectively how ridiculous the thought of demon possession is. Throughout the ages many people have been tormented and tortured because their mental illness has been mistaken for demon possession. And religion is certainly damaging, even devastating to our gay youth. It's time for people to stand up and declare the truth about all religions--they are totally illogical and can't stand the test of truth. Brainwashing is not the answer to your children who have real problems in this world. Oh by the way, Jordan was not mentally ill. He was only using a fake demon possession to get close to the hot guy he was lusting after.
Read more
2 people found this helpful
Helpful
Comment Report abuse

GWH
2.0 out of 5 stars YOU DON'T WANT A CLOSER WALK WITH THEE
Reviewed in the United States on July 5, 2019
Verified Purchase
This film got a lot of bad reviews, so, in its defense, I want to point out a few things. When the credits were rolling I happened to watch them, and yes, it's a low budget film because it's a college project. It's financed through kick-Starter. According to the credits, it's a product of student's from City College of Los Angeles. So, having noted that, I'd say it's not bad for that kind of project. It is a horror film, and given its origins, it's not a badly done horror film either ... and that's saying something coming from me because I'm not a horror film fan at all. I think if they could sell it to the Hollywood big wigs ... or do what they would need to do to get it financed and turned into a big budget film ... I think it could do well. It's not a bad story at all. I'm not going to be a spoiler, but I'd say it's certainly not what one thinks it is going to be, nor does it go in the direction that one thinks it's going to go. So. Overall. Not bad for Kick-Starter.
Read more
Helpful
Comment Report abuse

Amazon Customer
1.0 out of 5 stars At least one star is required to leave a review
Reviewed in the United States on July 25, 2018
Verified Purchase
If you don’t leave even one star, you don’t get to review.

This film is a student production from Los Angeles city College and does not do that institution proud. Someplace along the line there had to be faculty advisors providing input, criticism, judgment and advice. It was either terrible terrible atrocious advice or it was completely disregarded. And this from the city that made the motion picture industry.

A silly concept done in by a ludicrous script, hampered by bad sound and lighting, hindered by marginally competent production values and eventually done in poorly conceived characters, incomprehensible motivations and indifferent acting.

Memo to self: just because something is free on prime doesn’t mean it’s worth watching.
Read more
One person found this helpful
Helpful
Comment Report abuse

Jeff
5.0 out of 5 stars Amateurish
Reviewed in the United States on September 2, 2018
Verified Purchase
Even though it was amateurish, I LOVED it. Can't wait for a remake, or the filmmakers to make another film. This is a film in my definition. There could have been more salacious material, more sex, more debauchery, more male nudity, without being pornographic, just to spice it up, but I loved it, either way.
Read more
4 people found this helpful
Helpful
Comment Report abuse
See all reviews