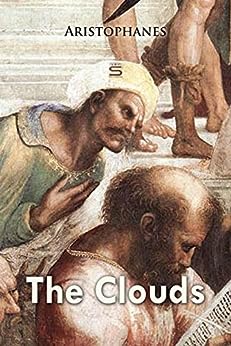 by Aristophanes (Author) Format: Kindle Edition
See all formats and editions
Sorry, there was a problem loading this page. Try again.
Strepsiades complains to the audience that he is too worried about household debts to get any sleep – his aristocratic wife has encouraged their son's expensive interest in horses. Strepsiades, having thought up a plan to get out of debt, wakes the youth gently and pleads with him to do something for him. Pheidippides at first agrees to do as he's asked then changes his mind when he learns that his father wants to enroll him in The Thinkery, a school for wastrels and bums that no self-respecting, athletic young man dares to be associated with.
Read more
Previous page
Next page


"A work of unusual excellence and an indispensable tool for all who are interested in understanding Aristophanes."--Hermathena
"A splendid book, easily the best edition of a play of Aristohanes yet to appear in this country."--Classical Review
"At last we have a major edition and a splendid commentart remarkable both for its learning and its conciseness."--American Journal of Philology
--This text refers to an alternate kindle_edition edition.

Webster’s paperbacks take advantage of the fact that classics are frequently assigned readings in English courses. By using a running English-to-Spanish thesaurus at the bottom of each page, this edition of The Clouds by Aristophanes was edited for three audiences. The first includes Spanish-speaking students enrolled in an English Language Program (ELP), an English as a Foreign Language (EFL) program, an English as a Second Language Program (ESL), or in a TOEFL® or TOEIC® preparation program. The second audience includes English-speaking students enrolled in bilingual education programs or Spanish speakers enrolled in English speaking schools. The third audience consists of students who are actively building their vocabularies in Spanish in order to take foreign service, translation certification, Advanced Placement® (AP®) or similar examinations. By using the Webster's Spanish Thesaurus Edition when assigned for an English course, the reader can enrich their vocabulary in anticipation of an examination in Spanish or English. TOEFL®, TOEIC®, AP® and Advanced Placement® are trademarks of the Educational Testing Service which has neither reviewed nor endorsed this book. All rights reserved. --This text refers to the paperback edition.

Webster’s edition of this classic is organized to expose the reader to a maximum number of difficult and potentially ambiguous English words. Rare or idiosyncratic words and expressions are given lower priority compared to "difficult, yet commonly used" words. Rather than supply a single translation, many words are translated for a variety of meanings in Spanish, allowing readers to better grasp the ambiguity of English, and avoid them using the notes as a pure translation crutch. Having the reader decipher a word’s meaning within context serves to improve vocabulary retention and understanding. Each page covers words not already highlighted on previous pages. If a difficult word is not translated on a page, chances are that it has been translated on a previous page. --This text refers to the paperback edition.
Read more

4.0 out of 5 stars
4 out of 5
48 global ratings
How customer reviews and ratings work

Santi Tafarella
5.0 out of 5 stars Thought Provoking and Troubling
Reviewed in the United States 🇺🇸 on March 16, 2008
Verified Purchase
Aristophanes' comedy "Clouds" is a humorous send-up of Greek rationalism, science, atheism, and lawyerly sophistry, as supposedly represented by Socrates and the philosophical and sophistic schools of Athens. Aristophanes portrays intellectuals as an arrogant class of effete and pasty skinned unbelievers. Except for their skills in rhetoric, which help them get around the law and rip people off, their knowledge is of little worldly or practical value. In other words, their heads are figuratively in the clouds (hence the play's title).

"Clouds" is funny in places, but also disturbing in its anti-intellectualism and nostalgia for marshal virtues and doubt-free theism. If Aristophanes were alive today, he might be a caustic, and very conservative, Republican (or even a Fascist). For all this, his play has an undeniably contemporary feel in its critiques of rhetoric, and makes a good primer for reflection on the nihilistic and shameless uses of argumentation (as when oil company representatives engage in blatant sophistries to cast doubt on global warming science).

But when, at the end of the play, the lead character (Strepsiades) gleefully burns down the school of Socrates, one is sobered by the reactionary nature of the play. The ending reminds one of humanity's long and tragic history of genocide and iconoclasm (the destroying of a rival ideology's texts, idols, symbols, or buildings). The ending of Aristophanes' play clearly suggests that the killing of an entire class of people in his society would be a positive development. It is not without reason that Plato famously attributed Socrates' death, at least in part, to the popular prejudice generated against him by Aristophanes' "Clouds."

In short, Aristophanes' play is thought-provoking, funny, and sobering. It's an easy read and, even after 2500 years, still relevant.
Read more
4 people found this helpful
Helpful
Report abuse

Miranda
5.0 out of 5 stars The Clouds: Illustrated.
Reviewed in the United States 🇺🇸 on May 23, 2013
Verified Purchase
The Clouds: Illustrated
A little light reading, for class. The Clouds, I needed the information in a hurry, but then I like reading anyway. This book was good and worthwhile. It landed in my Kindle book collection, and I take my books with me where ever I go. Love it! Illustrations are alright but not great. I can change the fonts to a size that is comfortable to read without glasses, or I can turn on the text reader and listen. Love my Kindle and love the books that I buy to go with it. The prices are so great, lots of the classics are free, leaving room in the budget to buy the others that are not. One day I may have enough time to read The Clouds for pleasure.
Read more
Helpful
Report abuse

Katie
5.0 out of 5 stars Great experience
Reviewed in the United States 🇺🇸 on September 1, 2013
Verified Purchase
this book came with no problem. There was nothing wrong with it, in great condition as promised. I received it with no issues and in a timely manner. I would recommend this to anyone and this seller as well. Great experience
Read more
Helpful
Report abuse

Felicia Gregg
2.0 out of 5 stars Disappointed
Reviewed in the United States 🇺🇸 on December 5, 2010
Verified Purchase
This book was difficult to read. It was filled with mechanical errors. words were spelled wrong, the grammar was off, and several parts of the book were switched.
Read more
11 people found this helpful
Helpful
Report abuse

Mark Malone
1.0 out of 5 stars Terrible translation
Reviewed in the United States 🇺🇸 on November 11, 2016
Verified Purchase
Full of typos, which I would forgive if not for Henderson's egregious renderings of the Greek, to the point that it was obnoxious to read. I've been a huge fan of Focus for a while, but this is embarrassing and I will not be getting another from their classical library series.
Read more
4 people found this helpful
Helpful
Report abuse

Victoria
2.0 out of 5 stars Two Stars
Reviewed in the United States 🇺🇸 on November 6, 2015
Verified Purchase
Does not have line numbers which would help me with my studies and class.
Read more
One person found this helpful
Helpful
Report abuse

Jeff Rasley
4.0 out of 5 stars Classic case of libel
Reviewed in the United States 🇺🇸 on November 14, 2020
Yes, of course, it's a classic, it's Aristophanes. But it's kind of sophomoric in its humor and it libeled Socrates in a way that was used against him at his trial. Socrates is branded a sophist, which he wasn't. Sophists were the precursors of out trial lawyers, i.e., legal guns for hire. Socrates (at least as we know him through Plato's Dialogues) was absolutely devoted to the philosophical pursuit of discovering the Good, the True, and the Beautiful. Socrates's conception of the realm of ideas is in opposition to the relativism preached by the sophists.
I re-read Clouds lo these many years after college, because my UChicago Book Club chose it. One of the most interesting issues we discussed is what do the Clouds represent in the comedy. They are the Chorus. They are thus a character or voice within the narrative, but they also comment on the action from a meta perspective. They represent the new gods of physics, but they defend the traditional gods. So, Aristophanes seems to accept the reality of science as a method of discovery, but thinks Athenian society needs to hang on to the traditional Greek gods for stability. He lived through the Peloponnesian War, the destruction of the democracy, tyrannical rule, civil war, and a pandemic. So, it's understandable why he might want to return to a safer, traditional time.
Read more
Helpful
Report abuse
See all reviews

Kindle Customer
3.0 out of 5 stars nothing special
Reviewed in Canada 🇨🇦 on December 27, 2014
Verified Purchase
This was essential reading for a university course. It is simply a satire of Socrates and as such is not the best of Aristophanes' plays. At least two others come to mind, The Fogs, and The Lysistrata, as better crafted.
Read more
Report abuse
See all reviews
Report an issue
Does this item contain inappropriate content?
Report
Do you believe that this item violates a copyright?
Report
Does this item contain quality or formatting issues?
Report