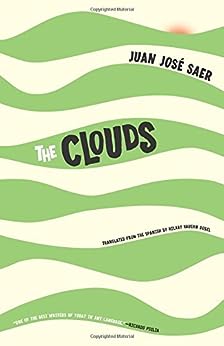 "Saer is one of the best writers of today in any language."—Ricardo Piglia

Juan José Saer was the leading Argentinian writer of the post-Borges generation. The author of numerous novels and short-story collections (including Scars and La Grande), Saer was awarded Spain's prestigious Nadal Prize in 1987 for The Event. Five of his novels are available from Open Letter Books.

2.9 out of 5 stars
2.9 out of 5
5 global ratings
How are ratings calculated?
To calculate the overall star rating and percentage breakdown by star, we don’t use a simple average. Instead, our system considers things like how recent a review is and if the reviewer bought the item on Amazon. It also analyzes reviews to verify trustworthiness.
Top reviews

Don Quixote
4.0 out of 5 stars The Journey of Narrative
Reviewed in the United States on March 28, 2020
I have read nine of Juan José Saer’s twelve novels, and so far I divide them into two groups: those I enjoyed and those I loved. For the sake of context, I’ll clarify that I have yet to read what many consider to be Saer’s masterpiece, _The Sixty-Five Years of Washington_ (1985); his posthumous and unfinished novel, _La grande_ (2005); and _Lo imborrable_ (1992), which has yet to be rendered into English. Along with his most famous novel, _The Witness_ (1983), and _The Event_ (1986), _The Clouds_ (1997) is a historical novel, set in 1804 in what would later come to be known as Argentina. I truly enjoyed this novel without absolutely loving it, and while I do not count it among my favorites by Saer, I recognize that in terms of the prose these pages are some of the author’s best.

Another reviewer complains about the descriptive nature of the novel. That, my friends, is simply the nature of Saer. Two of his major influences were William Faulkner and Alain Robbe-Grillet. He dialogued with Proust, and he adopted techniques from the Nouveau Roman without making himself comfortable in that niche. I do not read Saer for the story or for the characters; I read him for the addictive pleasure that his prose affords. Some authors write so well one would read them even if they were writing about nothing. Saer does write about something, but _The Clouds_ (and any other work that he wrote, for that matter) is not the kind of novel one reads to find out what happens in the end. These works raise the kind of questions that do not have definite answers, but which yield stimulating discussions.

So, Saer is descriptive. _The Clouds_, however, is not his most descriptive novel. That honor would go, without a doubt, to _The Regal Lemon Tree_, which will appear in English next year. That was the first novel by Saer that I read, for the simple reason that it was the only one by him that I could find at my university’s library, back in 2008. I will confess that I found it difficult to get through it. On page 30, I was still reading about the main character getting out of bed. The novel, which is one of Saer’s longest, is the story of the day a family gathers for a meal. It is one of Saer’s most extreme narrative projects. When I picked it up, I had no idea what I was getting into. Looking back, I can say I am a true Saer fan: having started at the most difficult place, I was nevertheless hooked.

_The Clouds_ is the description of a journey. The narrator, Dr. Real, is a young psychiatrist who works for one Dr. Weiss, a Dutch eminence in the field. Together they have opened an asylum in the pampas, and Real must travel to pick up four patients and get them to the institution. They are joined by a fifth patient and by a convoy that includes soldiers, their “wives” (who turn out to be in fact prostitutes), servants, guides, and other colorful characters. The journey involves a total of thirty-six people. They face inclement weather, a fire, and the constant threat posed by Josesito, a ferocious Native with his own band of pillagers and a taste for playing the violin.

There is an interesting frame to this narrative. In an introductory passage we meet Saer regulars Pichón Garay and Carlos Tomatis. The latter writes to the former to tell him about a common acquaintance, Marcelo Soldi, who has found an interesting text. The main narrative of _The Clouds_ is that text, which is sent to Garay in a diskette. So many filters: the original text – Soldi – Tomatis – Garay *and* us readers. (Adding, of course, the filter of translation for those not reading the novel in its original Spanish.) Soldi observes that he does not know whether the text is supposed to be history or fiction. Chez Saer, that doesn’t matter, because fiction is history and history is fiction. In the opening pages of _The Clouds_, Tomatis points out: “Lo que percibimos como verdadero del pasado no es la historia sino nuestro propio presente que se proyecta a sí mismo y se contempla en lo exterior.” This view informs not only this novel, but the entirety of Saer’s oeuvre. The past is a mirror in which we see ourselves reflected. The interpretation we give to the past is necessarily distorted (or tinted, if you will) by our current circumstances. We look at the clouds and see figures in them, but that is only our personal interpretation. Different people see different things in the same clouds, and all those figures eventually vanish in any case. Philosophically, you may have noticed, Saer is an existentialist.

For those new to Saer, I do not recommend _The Clouds_ as a starting point. _Scars_ (1969) is his first great novel. (The two previous ones, _Responso_ and _La vuelta completa_, neither of which is available in English, are still a bit awkward, and mostly for enthusiasts.) _Nobody Nothing Never_ (1980) and _The Witness_ are simply masterful. So is _The Event_, though this winner of the Nadal Prize is slightly more traditional than the average Saer novel. _The Investigation_ uses detective fiction tropes, and so may be easier to read than other novels by Saer, but it is not entirely representative of his work; I see it as a playful piece, though not necessarily a parody of the genre. Generally speaking, the 80s were the decade when Saer was at the height of his powers.

The translation by Hilary Vaughn Dobel is true to Saer’s serpentine, involving prose. Let me point out, however, that a few crucial lines of the original text, including the passage I quoted above in Spanish, are surprisingly missing in the English version. At the bottom of page 5, the paragraph that ends “…contains the whole,” should include about nine additional lines in which Soldi explains why he has no faith in history as a discipline.

Beatriz Sarlo, who called Saer the best Argentinean writer of the late twentieth century, speaks of a “double effect of lightness and depth [levedad y profundidad]” in _The Clouds_. Saer, she says, proves that after the crisis of narrative, it is still possible to narrate.

Thanks for reading, and enjoy the book!

william t.
5.0 out of 5 stars Five Stars
Reviewed in the United States on January 10, 2017
thank you for a nice copy delivered quickly.
Read more
Helpful
Report abuse
See all reviews
Back to top
Get to Know Us
Make Money with Us
Amazon Payment Products
Let Us Help You
EnglishChoose a language for shopping. United StatesChoose a country/region for shopping.
© 1996-2021, Amazon.com, Inc. or its affiliates