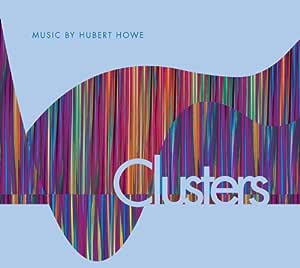 # RR7817. Outstanding computer music by a master of the genre - these works created between 2005 and 2011. CONTENTS: See accompanying scan image of the Playlist. Its informative 12-page booklet contains program notes, a brief bio of the composer, and the playlist. Total Time: 54'21".

Go Unlimited
Start your 30-day free trial
Stream Clusters by Hubert Howe and tens of millions of other songs on all your devices with Amazon Music Unlimited. Exclusive discount for Prime members.
Sold by Amazon.com Services LLC. Additional taxes may apply. By placing your order, you agree to our Terms of Use.

3.0 out of 5 stars
3 out of 5
1 customer rating
How does Amazon calculate star ratings?
Amazon calculates a product’s star ratings based on a machine learned model instead of a raw data average. The model takes into account factors including the age of a rating, whether the ratings are from verified purchasers, and factors that establish reviewer trustworthiness.
Top Reviews

I Care if You Listen (.com)
3.0 out of 5 stars Walking the line between music and chaos: Hubert Howe's Clusters on Ravello Records
Reviewed in the United States on September 26, 2012
There are many elements of music which we take for granted, especially in traditional Western music, which Hubert Howe does not. These include the even-tempered scale and the concept of standard harmonics. Even the (relative) consistency of instrumental timbre, which is common to almost all music around the world, is eschewed by Mr. Howe in favor of his computer-generated sounds.

This album is part of an ongoing experiment in the outer limits of what can be done with music, walking the line between music and chaos. In Howe's music, the line is frequently crossed. He created this album entirely using the CSound program (authored by Barry Vercoe). The user of this program can design artificial instruments, as well as override conventional acoustical physics, by selecting the partial overtones created by the notes played.

All of these intricate devices combine to create an alien atmosphere of sound. The first piece, Clusters, opens quietly, with what sounds like an organ, then throwing in harp-like glissandi, as the motion moves perpetually upward. There are some traditional devices used, such as the control of consonance and dissonance, and a prolonged call-and-response section. It all builds to an abrupt end.

The second track, Inharmonic Fantasy No. 2, sounds quite similar to the first, but it appears to be a study of vibrato, ranging from flat tones to heavy vibrato. Sometimes you think you can hear bells, and there are some interesting moments with a shimmering quality, but many of the sounds produced are cacophonic and difficult to listen to.

The next three pieces continue to move further away from what one expects to hear when listening to music. Timbre study #7 opens with a swarm-of-insects sound, followed by extremely deep, low tones that left me with an uneasy feeling in the pit of my stomach and some mild sea-sickness. It closes with long, drawn out notes with a Doppler-effect kind of sound. Pi, the fourth piece, is Howe's homage to the famous number, as the scale used in based on the number pi, and the piece is 3 minutes and 14.16 seconds long. I would say that it is the easiest piece to actually listen to, as the timbre is mostly bright, almost aquatic, and it extremely refreshing after the previous piece. The sound can be a bit piercing at times, but it has the most "musical" qualities of the set, to my ears at least.

The fifth piece, Macro Structure 2 is built using computer macros. The sounds are similar to the beginning of the third piece, and there is little flow in any direction, creating a static effect. 19-Tone Clusters is a slightly tweaked and extended version of the opening piece, Clusters. And the final piece, Groans, is as mysterious and difficult to approach as the fifth piece, though it seems like it has a different flavor.

So, who should buy this album? If you're looking for a musical setting for a romantic dinner, look elsewhere. If you are looking for music to relax to, this is the not the one for you. But if you are in a very experimental mood, and want to hear some sounds you have never heard before, then this should be interesting.

I think that from the viewpoint of an abstract academic work, Howe is searching into important avenues of redefining sounds and structures in music, and there may be some great music that can arise from this conception, but as it stands now, it seems to be just that, a conception.

Neil Prufer is a composer and pianist in New York City