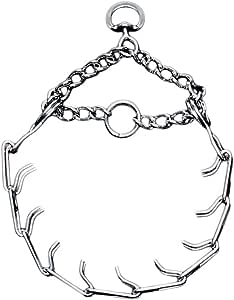 by Coastal Pet
4.1 out of 5 stars 155 ratings
Available at a lower price from other sellers that may not offer free Prime shipping.
New (6) from $19.20 + FREE Shipping

3.3 mm, 20" inch, Training Link Dog Collar. This quality chain is argon welded, and chrome plated for maximum strength, and durability. Titan chain will not tarnish, rust, or break. This collar is to be used when training your dog.

4.1 out of 5 stars
4.1 out of 5
155 customer ratings
How does Amazon calculate star ratings?
Amazon calculates a product’s star ratings based on a machine learned model instead of a raw data average. The model takes into account factors including the age of a rating, whether the ratings are from verified purchasers, and factors that establish reviewer trustworthiness.

M.B.
5.0 out of 5 stars We call it the magic collar
Reviewed in the United States on September 26, 2018
Verified Purchase
I have an 7 month old 80lb puppy who wants to pull us everywhere.
I have been hesitant to buy one of these collars ever since we got him about 4 months ago. I didn't like the way they looked, and I didn't want walks to be stressful for my dog, so I put off getting one despite recommendations from some experienced dog owners. We went to obedience class when he was younger, and yes it helped, but he would still get a wild hair and start pulling if he wanted to check something out, which was all the time. Good luck if it was a person or another dog. Or worse, a person walking with another dog!
We tried a couple of no-pull harnesses, and even a martingale collar, but they only had a minor effect on the pulling.
I'm a big guy, and it was getting difficult for me to hold him back if he started pulling, let alone my 5' tall wife. The dog is as big as she is if he stands up.
So I gave in and got one of these just to see if it helped.
When it arrived, I put it on my neck just to see what I was subjecting my dog to, and surprisingly, it wasn't all that bad. The points are not sharp at all, and they're spaced out enough that it's uncomfortable but not painful. It's like the bed of nails effect; enough points to distribute the pressure but not be pokey.
The next day my wife tested it on a walk, and she said it worked like a charm. I was still hesitant, but I tried it after that and I couldn't believe how well it worked. He walked perfectly on that walk and on every one since having this. He pulls just a little if he reaaallly wants to sniff something. But if we need to keep moving I pull only slightly and he knows it's time to go. 90% of the time it hangs loose around his neck, and only when he starts getting ahead of us or goes off the path does it start to tighten. It doesn't seem to bother him much, and he learned super quick that pulling meant discomfort, and walking alongside us meant treats and "good boys". I plan on using this for a while until he gets a little older and is more used to the idea that going for a walk means calmly walking along with us.

A couple of notes to consider if you're planning on getting this too,
I still put a harness on him so I have a handle in the event he is suddenly excited and tries to fully lunge forward. It would leave the realm of discomfort and enter pain if he tried that purely on this collar and that is not what it is for, and not what I want for my dog.
It is easier and safer to flip it inside out for getting it on and off, rather than trying to get the prongs past your dog's eyes.
I may still get the little rubber caps just for extra safety. Others have said they negated the effectiveness to some degree so I may wait until he's already used to it then put the caps on and see if it makes a difference.

This collar really does work though. I couldn't believe what a difference it made. We can go for longer, more pleasant walks now rather than a 20 minute tug-of-war session haha
Though I was hesitant, I'm glad we got this.

blu_canary
5.0 out of 5 stars This collar makes his ears click to "ON"!
Reviewed in the United States on July 16, 2014
Verified Purchase
My dog is strong. Very strong. And happy. While there are worse things, when I have to brace myself by holding onto stationary objects (e.g. trees) to prevent him from running off with me in a fit of joy, it makes for a less than ideal walk. If he takes a moment to listen, he follows commands, but when overcome by the sheer loveliness of seeing another dog who wants to play, his ears click to "OFF" and away we go.

My boy is a 70 lb hodgepodge of enthusiasm and muscle. The various breeds going on in his ancestry (including pit breeds) tend to increase his strength and tolerance to irritations. This collar makes him pause and listen---without him showing any signs of pain or even serious discomfort. That's all I needed! Walks are now highly successful and for the first time ever when we were travelling I was able to cross a busy gas station parking lot without him bounding off to greet someone. My 9-year old daughter can now walk him, as can my disabled father.

On the negative side, this collar doesn't do much to help his image. He's a big, brown, wiggly bit of mush. But he looks like a junkyard dog and the collar enhances that. On the positive side, I don't worry much about being mugged.
Read more
28 people found this helpful
Helpful
Comment Report abuse

Erika
5.0 out of 5 stars AWESOME! Works on the first try!
Reviewed in the United States on November 8, 2013
Verified Purchase
I was a little skeptical about getting this just because of bad things I have heard about it being abusive and all that nonsense. We took our Pitbull Mix to the beach for his first time (9 months old at the time)and it was so hard to keep him from pulling us to go see and smell other dogs/people. He is very very friendly. While at the doggy beach I talked to a girl with a Pitbull in the water that was wearing one of these and she really recommended it to me telling me that she had tried EVERYTHING and was just wasting money and how great this worked for her. She was a small girl with a big dog so I totally trusted what she was saying. I ordered this one off the internet because it was so much cheaper than in the stores. It seems to be very well made. The first time my husband put the collar on our dog the pulling stopped! I loaded him up and we went for our very FIRST walk at the local track around our citys football and baseball fields. I had ZERO problems with him. He acted perfect! It was a huge change from the walks we had had in the past around the neighbor, alone, with no other people around. I wish we would have bought it sooner!
Read more
26 people found this helpful
Helpful
Comment Report abuse

Sao
4.0 out of 5 stars Hands down, a life saver!
Reviewed in the United States on September 1, 2019
Verified Purchase
My dog is an 85 pound pitmix who likes to tugg and pull while walking and likes to jump. We tried getting a harness and that did not work for us. I was told to get a pinch collar but i wasn't sure. After doing some research we decided to try it out. When it arrived i put the collar on myself and tugged and pulled on it, to my suprise it did not hurt but gave an alert kind of nudged. Each time we knew guess came over i had it on him. I want to say 2 tuggs later he does not jump. Same with walking. He does not walk us, we walk him. This is the best collar out there. I literally was thinking about giving him up, luckily i tried this collar and he's a keeper.
Read more
Helpful
Comment Report abuse

A. Hembree
4.0 out of 5 stars Definitely helped keeping my large dog from pulling when walking
Reviewed in the United States on January 9, 2014
Verified Purchase
Let me preface this by saying I'm not a good dog trainer, and my dog was pretty pull happy on a regular collar. While she still pulls with this one (lab/pit mix), she is much more manageable, and as we take her for more walks she tends to pull less. Also, if we stop, she stops with us instead of continuing to try and pull (we're trying to train her, I promise!). This should not be a permanent collar, but when it is time for a walk she literally puts her head right in to it and is ready to go, which also makes it easier than trying to get her regular collar clipped on the leash. My make dog recently ripped her nylon collar off, which was hindering the performance of the Training collar. I would probably recommend, for a better effect, removing the regular collar and only walking with this one if possible. You can also secure it so it is fixed, and not adjusting, to use as a regular collar and eliminate the pinch feature. Well constructed, good product. Just a note to the manufacturer or potential buyer, the stickers were a pain to get off.
Read more
4 people found this helpful
Helpful
Comment Report abuse
See all reviews from the United States

Page 1 of 1 Start overPage 1 of 1
This shopping feature will continue to load items when the Enter key is pressed. In order to navigate out of this carousel please use your heading shortcut key to navigate to the next or previous heading.
Back
Next
Pages with related products. See and discover other items: dog chain, pet stuff, coastal dog collar, prong collar, dog training collar, Best pinch collars for dogs