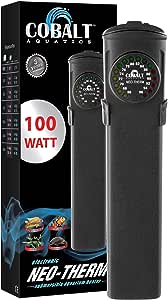 Cobalt Aquatics NEO-Therm fully submersible electronic heaters feature a modern, super flat design with an easy to set "one touch" control system. The advanced electronic thermostat is accurate to ±0.5ºF and includes a LED that displays both the Set Temp and Tank Temp simultaneously and has a Set temperature range from 66ºFup to 96ºF. For ultimate safety and reliability, integrated thermal protection circuitry shuts the heater down before it can overheat and its shatterproof outer casing makes the NEO-therm virtually indestructible. Perfect for freshwater and saltwater aquariums and terrariums

Cobalt Aquatics NEO-Therm fully submersible electronic heaters feature a modern, super flat design with an easy to set “one touch” control system. The advanced electronic thermostat is accurate to ±0.5ºF and includes a LED that displays both the Set Temp and Tank Temp simultaneously and has a Set temperature range from 66ºFup to 96ºF. For ultimate safety and reliability, integrated thermal protection circuitry shuts the heater down before it can overheat and its shatterproof outer casing makes the NEO-therm virtually indestructible. Perfect for freshwater and saltwater aquariums and terrariums

Please Read Instructions Before Use

See directions included with the unit

4.2 out of 5 stars
4.2 out of 5
1,564 global ratings
How are ratings calculated?
To calculate the overall star rating and percentage breakdown by star, we don’t use a simple average. Instead, our system considers things like how recent a review is and if the reviewer bought the item on Amazon. It also analyzes reviews to verify trustworthiness.

Willster83
1.0 out of 5 stars You know the feeling of loosing a loved one? Cobalt Aquatics Neo-Therm Heaters perfectly replicate this horrible situation...
Reviewed in the United States on October 10, 2017
Size: 150W (up to 40 gallon)Verified Purchase
You know the feeling of loosing a loved one? Cobalt Aquatics Neo-Therm Heaters, at least the 150 watt version, replicates this feeling of dread, sickness, anguish, and depression. Even a bout of anger once you've discovered that it was the highly rated and recommend heater you dropped money on. I purchased my first one in March 2014 after reading amazing reviews on the piece. I was excited that the heater kept control of the tank temperature, was easy to use, and possibly most of all, it's incredibly slim design. Don't let any of that fool you though. Heater #1 shorted out after 16 months, causing an electrical current to blast through my 40 gal reef. Somehow, I only lost a fairy wrasse. I contacted Cobalt. I never received a response back. When I called again, they said they'd ship me a new one free of charge, but would appreciate if I sent them the busted one so they could figure out what the problem was. They sent me a pre-paid shipping label, but when I dropped it off at FedEx, I was told that their account was frozen due to outstanding balances. I didn't want to pay $20 to ship the defected product, so I tossed it. I received the new heater within a couple days. Fast-forward to today, October 2017, roughly 26 months since I received the new one. I check on the same 40 gal only to find cloudy, 94* water. The heater, which I haven't set a temperature on since first receiving it, and at 78* no less, had set itself to 94*! And I can't get it to reset. Pressing the button on the top does nothing. I've lost hundreds of dollars of corals. Half of my fish and other inverts. I'm sick, bummed and furious about this company. DO NOT PURCHASE! Please.
Read more
156 people found this helpful
Helpful
Report abuse

Victor Wren
1.0 out of 5 stars Works Great! Until it kills your fish.
Reviewed in the United States on January 2, 2020
Size: 150W (up to 40 gallon)Verified Purchase
I have bought quite a few of these in various power ratings, ranging from 25 to 150 Watts, for the dozen or so fish tanks that my wife and I have. None of these heaters is more than two years old. For a long time, I was very pleased with them. I love the LED temperature view, and how it shows the current temperature and the set point. They are so much easier to set than any of the glass thermometers, and they are always within a degree of their set point. For a long time, I sang their praises and would consider using nothing else.

Then they began failing. One after another, they have given out on me. The worst part is their MODE of failure: They fail hot. They don't just quit heating one day. They crank up the heat dramatically, using all their wattage to make the water as steamy as possible. Fortunately, because we have thermometers on every tank, we have caught the temperature rise before losing any fish. Today was a fluke, because the 150W in our 32-gallon tank failed, and heated it up to nearly 100 degrees before I discovered it. As luck would have it, the only fish in there is a flag cichlid, which has very high heat tolerance. A month ago that tank was full of corydoras, and they would have never been able to survive that much heat. One of the nerites was able to flee the tank and find refuge above the water line, so she seems to have survived the heat event. I'm frankly amazed, because the water was uncomfortably hot to put MY hand into. That particular heater was a little over a year old.

I have lost count of how many of these Cobalt Neotherms have failed. I think that this is the FOURTH one, and they all failed hot. That's around a 50% failure rate within a 2-year period. Some of the ones that failed were less than a year old. We have these on surge protectors, so I am skeptical that power surges might have damaged the electronics. In any case, the internal thermometers in the Cobalt Neotherms keep working, flashing red to tell me that the water is a LOT hotter than the set point—as if I could do anything about it.

So all I can do at this point is replace them with glass Eheims, which don't have as good a temperature control, and are a lot more difficult to set, but on the plus side, my glass heaters have not yet gone insane and tried to boil my fish. For the larger tanks, I am considering a separate temperature controller module. The Neotherms are a great idea, and I love everything about them... except for the fish-boiling part.
Read more
44 people found this helpful
Helpful
Report abuse

Borias
1.0 out of 5 stars Worthless as a heater. Unreliable.
Reviewed in the United States on February 5, 2018
Size: 25W (up to 6 gallon)Verified Purchase
Ordered one (25 Watts), thermostat was stuck -- it said water was 84, water was actually 72. So, unit hung there and did not heat. I exchanged the unit with Amazon, and the replacement had a better thermostat (though still 4 degrees off from my thermometers (digital and mercury...), but did not heat water above 76 degrees even when set on 84, and this is a 5 gallon tank. Fancy, great form factor to slip into filter compartment, but unreliable. I replaced it with a $15 glass heater, which heats flawlessly. I was happy to pay the high price of the Cobalt for its features, appearance, and size, but it's worthless as a heater.
Read more
35 people found this helpful
Helpful
Report abuse

Valerie Speas
1.0 out of 5 stars Do not purchase!
Reviewed in the United States on December 11, 2017
Size: 200W (up to 55 gallon)Verified Purchase
Have this heater for just over a year and a half and one of my customers tank. Got a call from the house cleaner about the fish tank smelling incredibly awful. Showed up and the heater had malfunctioned and turned itself on to as hot as it would go and boiled over fifty fish in my customers tank! A product that is at this price point should not malfunction in a little over a year! Now my poor customer is out hundreds of dollars in fish not to mention the cost to completely rehab the tank. Then I look at Cobalts website and they say I have to pay for shipping for them to test the heater? What a joke! What a horrible company and a horrible product ! I mean I can see the cost of shipping if the heater wasn't broken and didn't malfunction but to say that it's a non-reimbursable fee ? Are you kidding me ? do not buy they do not stand behind their product by any stretch of the imagination! From here on out all of my customers tank will be heated by finnex heaters. Buyer beware these are no good! My only hope now is that Amazon, whom I bought the product from, will take care of the situation.
Read more
35 people found this helpful
Helpful
Report abuse
See all reviews

Nick E
1.0 out of 5 stars Smells putrid
Reviewed in Canada on September 11, 2018
Size: 50W (up to 12 gallon)Verified Purchase
I want to give this heater a 5 star review, i really do. But I've ordered two now and they both smell like they've been wretched from the bowels of a rotting whale Caracas. Absolutely horrid smell that makes me want to yarf. Can't wash it off either, i tried scrubbing with soap and water, rubbing alcohol, soaking it, nothing works.
Read more
Report abuse
See all reviews

Page 1 of 1 Start overPage 1 of 1
Previous page
Next page
Pages with related products. See and discover other items: modern aquarium, modern aquariums, saltwater tanks, Big Aquariums
Back to top
Get to Know Us
Make Money with Us
Amazon Payment Products
Let Us Help You
EnglishChoose a language for shopping. United StatesChoose a country/region for shopping.
© 1996-2021, Amazon.com, Inc. or its affiliates