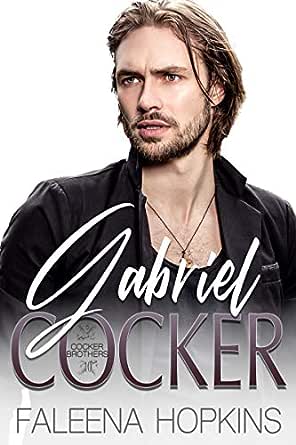 You've subscribed to Cocker Brothers! We will preorder your items within 24 hours of when they become available. When new books are released, we'll charge your default payment method for the lowest price available during the pre-order period.
Update your device or payment method, cancel individual pre-orders or your subscription at
Your Memberships & Subscriptions
There was an error. We were unable to process your subscription due to an error. Please refresh and try again. 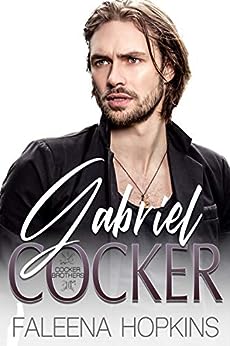 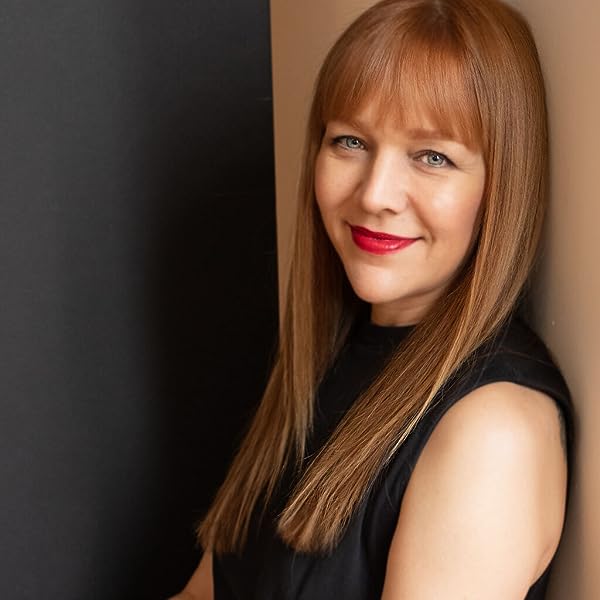 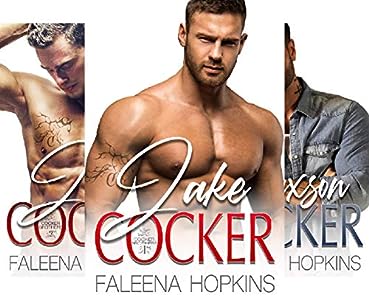 Gabriel Cocker, twin to Elijah Cocker, and youngest brother to Hannah Cocker, the three children of Justin and Jaimie Cocker. Find their love story in Book 5 of Cocker Brothers.

"I've never exactly understood the cultural mania around celebrity couples...suddenly, I got it." -Slate Magazine about Cocky Rockstar

"Each book is completely stand-alone, but you'll probably want to read the rest of them after this one anyway." -Hidden Gems about Cocky Rockstar

4.5 out of 5 stars
4.5 out of 5
347 global ratings
How are ratings calculated?
To calculate the overall star rating and percentage breakdown by star, we don’t use a simple average. Instead, our system considers things like how recent a review is and if the reviewer bought the item on Amazon. It also analyzes reviews to verify trustworthiness.

Keryth Belvin
5.0 out of 5 stars Best Cocker Yet!! Faleena Hopkins Is On Fire!!
Reviewed in the United States on May 20, 2017
Verified Purchase
I am voluntarily reviewing an advanced reader copy of this book, Cocky Rockstar: Gabriel.

This is book 3 of the offspring of the Cocker Brothers, but it is also book 10 of the full Cocker Brothers series.
Each one is wonderfully unique but also shares facts and characters from other books in the series. It is truly one of the best series I've EVER read!! Faleena Hopkins is one of the most gifted authors whose books I've ever read! Each book is a standalone, but much better if read in order, and each has a HEA. Don't deprive yourself the joy and delight of reading these, and all the other, wonderful books written by Faleena.

Gabriel, a rockstar, is the son of former senator, Justin Cocker and twin brother of Elijah. He loves the rockstar life: partying, sex with a different woman almost every night, sharing his music with the world. Settling down and having a family of his own, the furthest thing from his mind. Then his manager sets him up with a date that was won by a lucky lady through a radio contest. The winner is Paige, a yoga instructor, that is dealing with some pretty overwhelming family issues. Her brother, Bobby is an out of control, gambler that is taking Paige down with him. The same day that Paige meets Gabriel, she is involved in a fender bender with his cousin, Ben. Well, Ben is quite taken with Paige when he meets her. When Gabriel meets Paige and is taken with her himself, he is not happy about the overwhelming attraction or about Ben's interest in Paige.
Gabriel desperately fighting his feelings for Paige screws up big time before leaving town without attempting to contact her. When things worsen with Bobby, Paige turns to Ben for help.
Will Gabriel figure things out before it's too late for him and Paige? Has he lost her to Ben? When Justin gets dragged into Paige's family disaster will he cause serious problems for her in the future?
Read more
16 people found this helpful
Helpful
Comment Report abuse

O-BAR4707
5.0 out of 5 stars Two Cocker cousins fighting each other?
Reviewed in the United States on June 19, 2017
Verified Purchase
Gabriel is the son of Justin Cocker (Cocky Senator) who is the twin of Jason Cocker (Cocky Romantic). Gabriel is one of Justin’s two twin sons, and a half-brother to Hannah (Cocky Senator’s Daughter) This book has the first EVER fight with the Cocker family. Ben Cocker (Jaxson’s son) runs Paige’s car off the road when Paige’s brother shouts obscenities at him. After the accident when he meets Paige he decides he is attracted to her and want a date with her. When he finds out she has a date with his cousin Gabriel, as the winner of a contest, he decides to crash the date. When Gabriel picks up Paige, he has an instant attraction to her. Ben crashing his date doesn’t go over too well, so he sneaks her out the back door of the restaurant and ditches Ben. Now we have the two cousins fighting over the same girl. Gabriel knows that with his touring and lifestyle, he isn’t the best person for Paige, so he decides to leave her to Ben. Paige feels only friendship for Ben, and was crushed when Gabriel dumped her. With all the personal problems she is dealing with in her life Ben has been a good shoulder to lean on. Several weeks into the tour Gabriel decides he has made a big mistake and wants her back. He reaches her by phone when he is in the UK and she is just leaving Ben’s farm. He convinces her to join him on the tour and sends her a ticket. Gabriel has been trying to contact Ben to smooth things over, but Ben won’t answer his calls. These events and lack of communication cause a rift between the two cousins. When Ben and Gabriel finally meet at the Cocker family Bar-B-Q a fight breaks out. This is a great continuation of the Cocker family saga. Each book is stand alone, no cliffhangers, and a HEA
Read more
11 people found this helpful
Helpful
Comment Report abuse

CRUZGIRL
5.0 out of 5 stars Amazing!!!
Reviewed in the United States on August 3, 2017
Verified Purchase
How in the world can you have this many books about one family, and each book is better than the last? I'm speechless when it comes to the Cocker family. All I'll say is that this is the best series I have ever read! Gabriel's book was awesome! Faleena, if I could give this book 10 stars, it wouldn't be enough. Thank you for the Cocker's. And anyone reading this review, please buy this series. You won't be disappointed. On to Emma's book! Hurry with the next book Faleena!😉
Read more
8 people found this helpful
Helpful
Comment Report abuse

Guccigirl35
5.0 out of 5 stars Cocky Rockstar= 5 Stars
Reviewed in the United States on September 7, 2017
Verified Purchase
Gabriel is one of the twin son's from Justin and Jamie. He is the Rockstar , cocky as ever, he's a playboy that will never settle down.. While his whole life is about to change when he meets Paige the girl who won a date with him on the radio station. Gabriel didn't believe in love at first site but he gets hit hard by cupid.
This story has a love triangle between Ben, Gabriel and Paige. Who gets the girl? What happens with Ben and Gabriel's relationship, will this put a wedge in the solid Cocker family? Well you will have to read to find out. After reading Cocky Rockstar I am waiting patiently for Ben's story because he is one sexy Cocker. Happy Reading!!!!
Read more
6 people found this helpful
Helpful
Comment Report abuse

Elizabeth
1.0 out of 5 stars don't bother
Reviewed in the United States on December 8, 2017
Verified Purchase
You can read the stories in any order and still be able to follow what's going on, but it doesn't flow very well it could. I don't think I'll be reading any others. At least it was free.
Read more
11 people found this helpful
Helpful
Comment Report abuse
See all reviews

Ginjazzer
5.0 out of 5 stars A good raunchy read
Reviewed in the United Kingdom on July 15, 2017
Verified Purchase
This series is a guilty pleasure series - raunchy and well written. Far better than anything 50 Shades ever came up with (decent grammar for starters). Though all her stories are more than good sex books - they have a genuine story line too.
Read more
One person found this helpful
Report abuse

Jenny
5.0 out of 5 stars Wow!
Reviewed in the United Kingdom on May 9, 2018
Verified Purchase
Wow! Another steamy story of a Cocker brother. Gabriel and Paige's chemistry was off the charts and I couldn't put the book down. Faleena never fails to deliver an outstandingly steamy yet cracking storyline. Long may the series continue!
Read more
Report abuse

Hanbarn
5.0 out of 5 stars Excellent
Reviewed in the United Kingdom on June 9, 2017
Verified Purchase
Great value book as it holds two very good length stories that are very entertainingly. Love some of the dysfunction in the men and the strength in the women. Highly recommend.
Read more
One person found this helpful
Report abuse

Danii85
5.0 out of 5 stars Amazingly brilliant
Reviewed in the United Kingdom on March 4, 2018
Verified Purchase
Bloody loved t his so much it's definitely a favourite of the series so far Gabriel and Paige are perfect
Read more
Report abuse

Regina O Brien
5.0 out of 5 stars Fantastic
Reviewed in the United Kingdom on October 27, 2017
Verified Purchase
Another brilliant read from this author,this series is so addictive,it just gets better & better with each couple,hooks you from start to finish
Read more
Report abuse
See all reviews