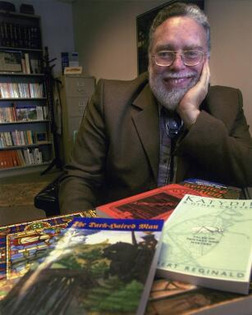 Osos Galore
4.0 out of 5 stars Leaves you wanting more.
Reviewed in the United States on February 15, 2017
Verified Purchase
It's probably a telling measure of how compelling and engrossing Kurtz's works are that we can be given a reference book THIS comprehensive, and not have our hunger satisfied.

I've waited for the Codex Derynianus for almost two decades. When it first came out in 1998, I, like many Deryni fans wished I could afford the limited edition, and had to wait for the price to come down. Fortunately for Kurtz's many fans, the 2005 paperback reprint made this gem accessible to the rest of us.

I had been hoping to use a metaphor like "crown jewel" to describe the Codex Derynianus, but there are several reasons why this volume has been a disappointment (hence the 4 stars) despite my overall very positive impression of it.

The first things I looked for when I finally got my hands on my copy were the maps and genograms (family charts). Kutz is unusual among fantasy authors for her inclusion of detailed genograms in her works. They have always been one of my favorite features of her books. So it came as a great disappointment to find that the genograms from some of the books are missing - - incredibly, only royal descendancy charts are included.

Also, I was hoping for more complete maps; these ones are rough sketches with many locations omitted, and even have some mistakes scratched out. I was glad to see that they have an expanded geographic scope (even the Holy Lands are included). But I was expecting to find a clear and legible copy of some of the maps (such as the city map of Rhemuth in the Childe Morgan novels) that are printed at too low resolution to read even in their hardcover editions. I mean, if we can't even read them in the hard-cover editions, where are we supposed to find them? In the Codex Derynianus, of course! Nope. All maps from the series should have been included, and they really needed to be printed as fold- outs. (I should add that the Eleven Kingdoms and city of Rhemuth map in the Childe Morgan series is available for purchase as a poster-size wall map, and in that format it *is* legible.)

The size of the volume is surprisingly large, which is GREAT for how much information it affords the printer to pack into this satisfyingly dense volume. As soon as the book arrived, I spent an hour perusing the entries, and I found the historical background especially intriguing. I confirmed the inclusion of many details that will delight and thrill fans - - like the origin of the name "Haldane," the relationship of the Catholic- like western church to the Eastern Orthodox- like church in Torenth, and how a Rome- like country near the Holy Lands fits into the picture.

Many entries went far beyond what the novels give away. But others (such as the entry on the mysterious character Orin) stuck too close to what has already been revealed. I doubt that Kurtz has shared even a quarter of all she knows about this great mage or his female counterpart with whom he was buried, and I'd hate us to have to wait until a Tolkien- like posthumous publication of her notes to see the rest of this and other side stories brought to light.

This size of paperback can be terribly short- lived...the weight of the pages tends to damage the binding after moderate use. I really wish this had been a hardcover- only reprinting, and I fear I shall have to baby my copy to keep it intact. Working reference books of this size really don't work as paperbacks.

There are tantalizing Greek and Latin phrases at the end of entries that add a more medieval flavor to the Codex. These add to the fiction that the reference work could have been written by a monk, Brother Theophilus. I've always loved Kurtz's inclusion of Latin in her books, but usually it comes with at least a partial translation. It looks like I'm going to need to learn more on my own, but that's a good thing. I only wish that she had spent more time adding monastic touches to add to the sense of a medieval origin. After all, this is the author who taught us the meaning of words like "scrivener" and "majuscule," who transports us to medieval life by adding historically authentic details to her novels that only an anachronistic native, a well-researched reenactor, or a jealous would-be time traveler like myself (and I would guess, most of her fans) would care to know. So it was surprising not to find any elaborate lettering at the heads of sections, and to find that the cover and the maps are the only artwork beautifying the volume. The perfect touch to a supposedly translated work would have been to include a few fictional facsimiles from the "original manuscript," such as a photographed title page and some pages of the "actual text," to show how the monk's handwriting looked and how the information was organized before it was put down into perfectly ruled and typeset modern print.

My only other complaint is that Kurtz and Reginald didn't include more information from the (at the time of first publication, then- forthcoming) Childe Morgan series. Many entries in the timeline section of the volume read as summaries of the relevant novels. We know that at the time The Quest for Saint Camber was published, at least three more trilogies had been planned for the Deryni universe. We can presume to guess that The Heirs of Saint Camber trilogy, the Childe Morgan series, and perhaps two additional books beyond King Kelson's Bride may have been outlined at the time, or perhaps even a trio of novels around the hinted tragic events of 948. I hope that one day more of that material, and any other unpublished notes, would make their way into an expanded, updated, hardcover edition of this great book.

'Til then, fans will cherish this generous and fairly complete offering of Deryni lore - - a wide and deep encyclopedic look at this beloved alternate world that is much more comprehensive than most fans get from their favorite authors, yet still tantalizing for what it leaves out. It's probably more than we could have hoped for, and for that we will always be grateful.

Rob Davidson
4.0 out of 5 stars Great reource for Deryni fans
Reviewed in the United States on October 21, 2012
Verified Purchase
This book is an excellent addition to your library if you are a fan of Katherine Kurtz's Deryni stories. I started re-reading the books recently after many years, and the Codex has been a great way to refresh my memory and pick up on cross-references that I had either forgotten or never realized before, as well as filling in earlier history of the Deryni world that I never knew.

I give the Codex Derynianus four out of five stars. The main defects are inadequate genealogical tables in the back and a woefully incomplete and frustrating series of maps. The maps seem to be only initial sketches; they lack a lot of information, have a number of obvious misspellings (and over-written corrections,) and don't have any over-lapping areas to make it clear how each map relates to the others (even just a one page overall map would have been a big help.) If the book ever gets re-published in a new edition, I hope the publisher will at least have the map section re-done.
Read more
Helpful
Comment Report abuse

dmcamp
5.0 out of 5 stars Large book full of information
Reviewed in the United States on April 28, 2020
Verified Purchase
Thought I would reread the series after a very long time. This book looks great, full of lots of information. I like the hand drawn maps in the back.
Read more
Helpful
Comment Report abuse

HollyB
5.0 out of 5 stars Five Stars
Reviewed in the United Kingdom on December 26, 2015
Verified Purchase
thrilled to have it
Read more
Report abuse

Sverre Svendsen
5.0 out of 5 stars The ultimate Deryni reference
Reviewed in Canada on July 3, 2013
Verified Purchase
Excellent and exhaustively comprehensive, but does not include all details of the two novels published after this Codex, namely "In the King's Service" and "Childe Morgan". It does include "Deryni Magic" and "Deryni Archives" material.
Read more
Report abuse
See all reviews