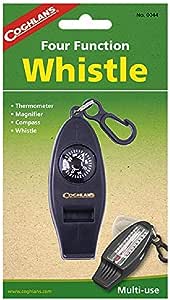 Stay Safe on the Trails

4.5 out of 5 stars
4.5 out of 5
1,471 global ratings
How are ratings calculated?
To calculate the overall star rating and percentage breakdown by star, we don’t use a simple average. Instead, our system considers things like how recent a review is and if the reviewer bought the item on Amazon. It also analyzes reviews to verify trustworthiness.

Feeder of Floyd
4.0 out of 5 stars Finished the Pacific Crest Trail with me. Useful for general navigation.
Reviewed in the United States on October 19, 2017
Style: 4-functionVerified Purchase
Temperature is hard to read but does give you a general idea which was important to me.

Compass worked great for general navigation. Actually relied on it during the PCT hike to get me through places where you couldn't find trail due to snow. The compass gave proper general direction for navigating in the woods when I needed it.

I kept it clipped to my shoulder pad and it never had any problems or breakage despite being beat around all the time when taking my pack on and off, put on trees, rocks etc.

Amazon
5.0 out of 5 stars Bought for whistle and thermometer, compass is a plus.
Reviewed in the United States on October 4, 2016
Style: 4-functionVerified Purchase
Whistle: Very loud. At first I was blowing on it too lightly and thought it was defective. I gave it a nice blow and wowza, yes it works great! Short bursts work well too.

Compass: I'm completely new at using a compass but I do know west has to stay west and so forth. I've tried it many times in my house, I shook it hard many times and checked if the directions still pointed in the appropriate direction. It did for the most part, although it seems to be off by about a dash sometimes, but that could be me I guess.

Thermometer: The print is small but my eyes for close-up objects is perfect so I have no problem reading this. For those of you who are far sighted, it may be a bit harder. I have no other thermometer to compare accuracy perfectly, but using my own bodies thermometer, it seems on point. When I turn off the AC in the house the temperature on this baby slowly increases and vice versa. The numbers that shown are by 10 values and the marked dashes in between are by 5 point values, plus an extra red dash for the 32 degree Fahrenheit.

Magnifier: Its takes a tiny bit of effort to pull it out, but you can definitely do it no problem. Push it in from one end and use your nails to grasp it and swing it open from the other side. Or use a thin tool like a knife or small tool to push it all the way through. Usefulness: it's a little magnifier, it magnifies things a little.

Other: The clasp itself is all plastic, no hinges. To open it wide enough to hang, you give it a push and it bends in somewhat. On it's own the clasp sits slightly ajar (1mm). It can attach to anything thicker than a millimeter and not fall out.

I was going to give this four stars because the compass MAY be off by a dash, BUT that may be my lack of skill so in all fairness I won't take off a star. Also even if it IS off by a dash, I am backpacking trails so I don't need anything heavy duty, and if I did I would buy a compass on it's own. This little item is amazing! I bought it primarily for the whistle and thermometer and it meets my expectations. The compass is a plus and I don't care squat for the magnifier either way. The clasp is a simple plastic thing, it's thick, sturdy and will do it's job, I don't see that breaking anytime soon, It can also be replace by a tiny carabiner if you prefer. All in all 100% worth the money.
Read more

Bryan
5.0 out of 5 stars Cool tool to clip on a zipper. Just practice with it.
Reviewed in the United States on December 4, 2017
Style: 4-functionVerified Purchase
Really is a cool item in a small package. I magnifier actually works for starting a fire. The whistle is great for getting someones attention when at the back of a pack of ATV riders. The thermometer is just kind of cool but I dont think i need it to tell me its cold or hot out. The compass could be handy if a person knows how to use it or knows which way they need to go. Most aren't good with either and should go outside and practice with this kind of stuff so if NEEDED, a person knows how to use it. Learning to use these kind of tools when your in a bind is a bad bad bad idea. A person should learn how to use a compass and learn what can throw it off giving you a false reading, getting a person more lost than they were to begin with.

I thought it would be a good idea to give one to my girlfriend when we went on a hike and after 30 minutes or so, I ask her to try to build a fire with it. After a bit of confusion and looking for fire starting material, then partnered with some patience and persistence, we had a small fire and she had alot of pride in her small accomplishment. But even more important, she knew she could start a fire if she needed to with this handy little tool, and proved it!

I bought one and liked it well enough that I bought 4 more for my EDC kits I put together.
Read more
11 people found this helpful
Helpful
Comment Report abuse

David G.
5.0 out of 5 stars YOUR survival is YOUR responsibility.
Reviewed in the United States on October 29, 2018
Style: 4-functionVerified Purchase
I am compiling a Bug Out Bag [BOB] for every family car. I included these as a key component.
My thoughts: expecting [or just hoping] that others will come to your rescue during a natural disaster like flood, hurricane, or a forest fire, or even just a stranded auto ... is not enough. YOUR survival is YOUR responsibility. While putting these BOB's in every car might not be the best location, having them ready is the first step, knowing where they are located is the second step. Hint: I actually plan to store each in a water-resistant plastic ammo box ["Plano"], that includes all items ... plus a small backpack for easy "no hands" carrying.
Dave@Texas
Read more
8 people found this helpful
Helpful
Comment Report abuse

William V. Morrow
4.0 out of 5 stars Buy it, you will not regret it
Reviewed in the United States on June 9, 2016
Style: 4-functionVerified Purchase
I purchased this about 4 years ago and have been meaning to get more of them for my other backpacks. They are good quality and I don't think you will be sorry your bought one. Each family member should have one if you hunt or hike or like to walk in the woods. I just purchased 2 more just recently.

I always have one on me when I go hunting or walking in the woods. The whistle is very loud and would think it will carry a good distance. The compass works extremely well, having used it a few time when I got turned around in the woods while hunting and always made it back to my Jeep.

I find the Thermometer has come in handy while hunting many times. It appears to be quite accurate. I tested once with another thermometer and they both had the same reading. Haven't used the magnifier so can't comment on it.

The clip is sturdy and hasn't broken even with heavy use. I am constantly moving if from my hunting vest to other things. That is why I bought additional ones so I don't have to remove it.

These are great for the price and are nice gifts for your friends if they share your outdoor activities.
Read more
18 people found this helpful
Helpful
Comment Report abuse
See all reviews

L Westerman
4.0 out of 5 stars Loud and piercing
Reviewed in the United Kingdom on December 29, 2019
Style: 4-functionVerified Purchase
The whistle is loud and ear piercing. Worn on lanyard for two days before it fell off suggesting the clip was poor
Read more
Report abuse

Jassu
4.0 out of 5 stars Works good for the price, here's my review
Reviewed in Canada on May 11, 2020
Style: 4-functionVerified Purchase
Y The thermometer seems to work fine (see pic), but I don't know how accurate it is.
N The clipper does not seem durable or reliable. I will replace mine with a lace/cord.
Y The magnifier was surprisingly good, I could see my dry skin up close lol.
N The whistle was not loud at all. My scream would be louder.
Y The compass seems to work as well (I compared with my phone's compass). It will point you to the
approximate right direction (example: North), but be careful to do this without any metallic objects around.
Also it will only work if laid horizontally on an flat surface. If you're holding it vertically, it will NOT show you
a correct reading.

Was it worth it?
For less than $5, yes!! Overall, the main functions worked as intended. The clipper you can easily replace, and the whistle, well, you can just buy an actual whistle for something really loud.

KZ
5.0 out of 5 stars Compass, Pea-less, Carabiner
Reviewed in Canada on October 26, 2020
Style: 4-functionVerified Purchase
Good tool for outdoor adventures. The whistle doesn't have the pea, so don't expect sport coach sound. It's a sharp single tone. Not anywhere as loud as the pea whistles, but enough to alert in emergency. Use it for hiking all the time and have one for everyone in the family. We hang it using the included carabiner to a paracord necklace (not included). Included compass and the impossible to slide out magnifier are great additions. This whistle is a very fun activity for kids on long hikes.
Read more
Report abuse
See all reviews

Page 1 of 1 Start overPage 1 of 1
This shopping feature will continue to load items when the Enter key is pressed. In order to navigate out of this carousel please use your heading shortcut key to navigate to the next or previous heading.
Back
Next
Pages with related products. See and discover other items: adventurer backpack, marine hardware, whistles lanyards, hardware thermometer, survival accessories, Best compass for directions