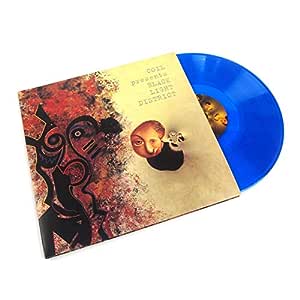 Danny Diess
5.0 out of 5 stars excellent quality and sound
Reviewed in the United States on June 6, 2020
Verified Purchase
everything about this album was great aside from being a mega Coil fan i was very pleased with the quality and sound of this vinyl set. Thank you again for such awesome service. Highly reccommended this seller and thier products.
Read more
Helpful
Comment Report abuse

Rob
5.0 out of 5 stars new pressing sounds great
Reviewed in the United States on November 5, 2018
after much delay and headache on both the publisher and fans, the 2018 reissue is finally out and i gotta say its pretty much perfect. even on my crummy stereo it sounds as otherwordly as i remember. sides B and D are some of my favorite COIL but its all great really, a very underrated album among fans. i only wish there was more! the liner notes give some insight to the sound therein, mentioning both Harmonia and the minimal soundscapes of Tetsu Inoue. looking at the release date and listening to the A side provide another group left uncredited but still very present here, Boards of Canada. their dark reverb towers echo quite menacingly through the distorted tones of "Die Wolfe..." and "Refusal of Leave". i'd guess "Blue Rats" is their own little Cluster/Harmonia tribute and a scritchy-scratchy wonder it is! and then there is also "London's Lost Rivers" which wasn't on the CD back in the day but fits perfectly, jb's vocals repetitive and faint, but striking. and then there's "Chalice", one of the best things sleazy ever arranged and an amazing end to this particular corner of the COIL puzzlecube. no need to get scalped by the so-called trve fans, now its available for all. i got the lovely blood-red LP and it included a d/l card. get it.
Read more
One person found this helpful
Helpful
Comment Report abuse

SC Oliver
5.0 out of 5 stars Coil at their greatest
Reviewed in the United States on September 5, 2010
Coil released a wide range of music over their career, from harsh noise to house music (sort of) to minimal ambient to something akin to folk music (but smarter and darker), but if I had to choose a favorite it would be this, released under the Black Light District moniker.

Jhonn Balance's vocals are less present here than on other releases but many of the elements of Coil's music--electronic experiment, a dark ambiance and a melancholy undertone--are all in full form here. "Die Wolfe Kommen Zuruck" and "Refusal of Leave to Land" might be Coil's two best tracks, back to back, darkly psychedelic and as seductive as they are menacing. Most of the tracks are lengthy and somewhat somber but tracks like "Unprepared Piano" still show Coil's sense of humor and willingness to try new things. This isn't the bent-disco of Love's Secret Domain but something more for isolated, headphones listening.

If you're new to Coil this is a good place to start, and if you're a fan of their other albums you won't be disappointed by this release.

loteq
4.0 out of 5 stars World without warning
Reviewed in the United States on June 4, 2002
After Coil's long lay-off during the first half of the '90s - where the band merely cleaned out their archives and reissued some older albums on compact disc - the musical climate had certainly changed in the avant-garde/ambient/dark wave genre, so some fans may have wondered how Coil would continue their musical journey into previously unknown territories. 1995's "Worship the glitch" (under the ELpH banner) tapped fully into the then-modern approach of cut-and-paste soundbits, mechanical ambience, and heavy digital distortion, but the real surprise came with their next offering - 1996's "Black light district", ominously subtitled "A thousand lights in a darkened room" and originally released by Coil's side-project of the same name. Although the band's line-up had changed since the late-'80s and since "Worship the glitch" (and perhaps the reason to ditch the ELpH name), the music is sometimes along the same lines as the ambient tracks on Coil's earlier albums, albeit with a much more refined, coherent quality. Considering that "BLD" is an astonishingly diverse and innovative album that includes everything from creepy atmospherics to quiet ambient waveforms to somewhat hyperactive glitch textures, it becomes clear that Coil have created a piece of music which often seems to be the opposite of those smooth-as-silk ambient ventures we came to expect from so many '90s electronica artists. No album by Coil is easy to start with, but in my eyes "BLD" is very accessible and listenable due to its diversity and Coil's ability to hold the listener's attention, if only to see what will happen from track to track. You know...things happen a lot! A short piece called "Unprepared piano" (and exactly sounding like that) gets the album underway, followed by "Red skeletons", which consists of shuffling, muffled layers of rhythm and lots of non-musical effects. The first real highlight, however, comes in the shape of the 10 ½-minute "Die Wolfe kommen zuruck", which is German for "The wolves are coming back". Although the title strongly suggests a sort of environmental feel, the soundscapes rather work in an industrial direction: A heavy, repetitive metallic pound (an alternative, more vivid description could be 'clanking graveyard rhythm') plays over dark, droning noise loops and siren-like tones - this will make your little puppy dog hide under your bed. The first few minutes of "Refusal..." will sound familiar to owners of "The Angelic Conversation" in that it uses various processed water noises before a shimmering melody works its way through the gloom, backed by John's fantastic, dreamy vocals. Unfortunately, a couple of slightly uneventful pieces lurk in the middle of the album, most notably "Green water" with its rather childish keyboard noodlings and the two-part "Stoned circular" with its deranged effects, but thankfully things quickly perk up again with the 9-minute, appropriately titled "Cold dream..." and the utterly stunning "Blue rats". The latter sneaks along on a bass-heavy, punchy sequencer arrangement and features another excellent vocal performance by John, this time much more paranoid and aggressive. The album-closing "Chalice" seems a bit similar to Autechre's and Black Dog's early material, especially due to the way the descending synth chords and melancholic undercurrents are presented, although the sound effects and choir-like voices are pure Coil. Despite the unquestionable quality of this release, there's one thing which really annoys me: The vinyl edition of "BLD" features the 8-minute bonus track "London's lost rivers", perhaps one of Coil's most disturbing songs because it displays the feelings and impressions of a suicidal before he drowns himself in the rivers of London. Quite why this excellent track was left off the CD edition remains unclear, but it can also be picked up on the Russian compilation "A guide for beginners: Silver voice". In sum, if you're looking for a more dance-oriented Coil album, like "Scatology", "LSD", or "Stolen and contaminated songs", then this isn't for you. If you like to explore the outer realms of ambient music, then "BLD" should impress.
Read more
11 people found this helpful
Helpful
Comment Report abuse
See all reviews from the United States

Mr Grieves
5.0 out of 5 stars Moon Musick in a Darkened Room
Reviewed in the United Kingdom on July 30, 2018
Verified Purchase
One of two new Coil reissues from Dais (the other being 'Worship the Glitch'), Coil Presents Black Light District: A Thousand Lights in a Darkened Room (snappy title isn't it?) is an ambient, subtle and quietly mesmerising thing of wonder. But, of course, if you've heard Coil before than you'll already know to expect something special. Falling in line with their more ambient works (or Moon Musick as they called it) Black Light District is a predominantly instrumental album yet while Johns vocals are of course crucial to the Coil legacy, this particular album see's them shine regardless. Don't listen to it in the background on a sunny day, wait until nighttime then put it on (preferably with the lights down low for atmosphere) and let it pull you under it's spell. It's won't replace the two volumes of 'Musick to Listen to in the Dark' as my favourite Coil album but it's certainly a strong, essential listen for any fan.
Read more
4 people found this helpful
Helpful
Sending feedback...
Thank you for your feedback.
Sorry, we failed to record your vote. Please try again
Report abuse