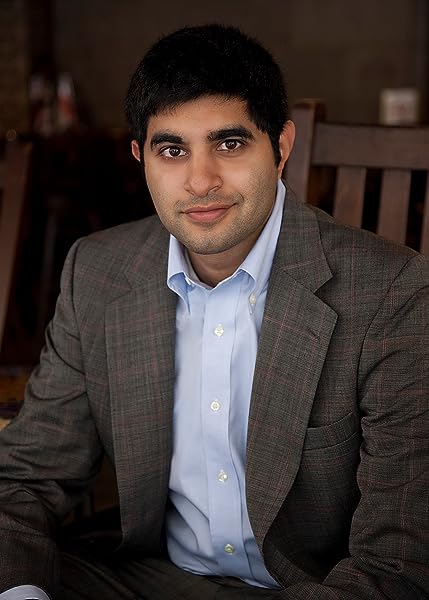 Coined: The Rich Life of Money and How Its History Has Shaped Us Hardcover – Illustrated, March 10, 2015

"Simply relax and float along the current with Sehgal, and find yourself in the Galápagos, the Federal Reserve's gold vault, a neuroscience lab or ancient Mesopotamia, all the while having no idea where you are headed next...Sehgal is a tireless and eloquent guide, and knows just how long to stay at each stop." --Financial Times

"Coined is that rare book indeed - a fun romp through the history of human exchange, taking up the subject of money in its physical, psychological, philosophical, and historical forms. Like Salt, the topic serves not as a lens that narrows, but as a backdrop for a panoramic viewpoint, sparkling writing, and an exploration of a world you may never have known existed."
--Rachel Kleinfeld, Senior Associate, Carnegie Endowment for International Peace

"Kabir Sehgal has done us a great service in writing this book. He has presented in this book everything that money has meant to people over the centuries and with a multidimensional perspective. He has prepared the ground for us to take it forward, to give new meaning to money, to assign it new roles in our lives, and imagine the future of money as a foundation upon which we can build the future of the world we all cherish. Thank you, Kabir."—Muhammad Yunus, Nobel Peace Prize Laureate, Founder of Grameen Bank (from foreword)

"Coined doesn't resemble any of the usual text books on money. For one thing, it's actually fun to read--and Kabir Sehgal will stimulate your thinking about our financial crisis and banking."—Paul Volcker, Former Chair of the Federal Reserve

"An exceptional examination of the history of money. Kabir has written an engaging narrative that spans thousands of years and introduces readers to important people who have impacted the chronicle of currency."—Jimmy Carter, Former US President

"The best things in life are free, but ever since civilization began money has had a profound impact on humanity. Kabir's book brings the story of currency to life and is worth spending a few of your hard-earned coins on."—Sir Richard Branson, Founder, Virgin Group

"Well-written. Clever. Innovative. This amazing book will get you thinking about money in completely new ways. If you want to understand how money has impacted the human condition, for better or worse, and how it will continue to shape our behavior, read this book."—Sheila Bair, Former Chair of the Federal Deposit Corporation

"Kabir Sehgal has tackled the topic of money and written a fascinating account that weaves together history, philosophy, and personal anecdotes. He provides insights that are both riveting and thought-provoking."—Walter Isaacson, bestselling author of Steve Jobs and President of the Aspen Institute

"Coined is a world history of currency that looks at the different forms money takes across time and across cultures. Mr. Sehgal's anecdotes are wide-ranging and include the birth of exchange in the Galapagos Islands; the art sought after by coin collectors in Vietnam; a tour of the Federal Reserve's vaults in New York; and the way bees trade pollen in the hive."—Bill Clinton, Former US President

"Kabir Sehgal has created an ideal book for anyone interested in understanding how money has impacted our world. His thought provoking and impressive writing style makes this an enjoyable and educational read."—William H. Rogers, Chairman & CEO, SunTrust Banks

Kabir Sehgal is a vice president in emerging market equities at J. P. Morgan in New York. He serves as an officer in the United States Navy Reserve, served as a speechwriter on a presidential campaign, and is a term member of the Council on Foreign Relations. He is the New York Times bestselling author of books including Coined, Walk in My Shoes (with Andrew Young), A Bucket of Blessings, and Jazzocracy. A Grammy-winning producer who has performed with Grammy-winning musicians as a jazz bassist, he co-founded an arts organization which merged with the Afro Latin Jazz Alliance. Sehgal is a graduate of Dartmouth College and the London School of Economics. He is a diehard Atlanta Braves fan. To learn more about the author, visit CoinedBook.com.

Start reading Coined on your Kindle in under a minute.

4.4 out of 5 stars
4.4 out of 5
127 global ratings
How are ratings calculated?
To calculate the overall star rating and percentage breakdown by star, we don’t use a simple average. Instead, our system considers things like how recent a review is and if the reviewer bought the item on Amazon. It also analyzes reviews to verify trustworthiness.
Top reviews

Kindle Customer
2.0 out of 5 stars Not for me
Reviewed in the United States on July 31, 2019
Verified Purchase
I really wanted to like this book, given that I have a personal interest in finance and the reviews were great. But after 5 months I still cannot get into it and I'm calling it quits. The book simply was not captivating to me and I would find my mind wandering while I read it. Based in the reviews, I'm definitely in the minority as most reviewers seem to have loved it.
Read more
Helpful
Comment Report abuse

Adk2104
5.0 out of 5 stars For both money connoisseurs and non-connoisseurs!
Reviewed in the United States on August 19, 2015
Verified Purchase
I know absolutely nothing about money. So picking up this book I was afraid it would all fly over my head. Not so, not only did the author clarify complicated events(such as the 2008 market crash), he did so in an entertaining way, providing fascinating facts and stories from around the world. Awesome read! Recommend it to both money connoisseurs and non-connoisseurs!
Read more
7 people found this helpful
Helpful
Comment Report abuse

Carole L. Kay
5.0 out of 5 stars A great read!
Reviewed in the United States on May 11, 2015
Verified Purchase
More fun than you could possibly imagine a book about money to be! The author goes all the way back to Galapagos and cellular symbiosis to explain how monetary systems work and why they excite us -- in a way that is always riveting and occasionally sexy. A great gift for anybody who acquires, disburses or thinks about money (and who doesn't?)
Read more
One person found this helpful
Helpful
Comment Report abuse

Pictashowfan
5.0 out of 5 stars A truly terrific read on a fascinating subject!
Reviewed in the United States on June 14, 2015
Verified Purchase
A truly terrific read on a fascinating subject. Rigorous and entertaining, syncretic and playful -- a must-read for anyone curious about the history of money. I especially loved how Sehgal wove his own experience as a banker into the book, while seeking out dozens of experts and theories on value. One of my favorite books this year. Enjoy!
Read more
One person found this helpful
Helpful
Comment Report abuse

Rezanate
5.0 out of 5 stars Love this book
Reviewed in the United States on April 27, 2015
Verified Purchase
Love this book! Everything Kabir writes brings a fresh perspective and new insight into the topics he covers. This book will not disappoint.
Read more
2 people found this helpful
Helpful
Comment Report abuse

Travis T Brown jr
5.0 out of 5 stars Keep the Change: Coined Is a Masterful Story of Money as Invention, Tool, Technology, and Accelerant of History
Reviewed in the United States on August 26, 2015
Verified Purchase
Coined tells the fascinating story of the origins of money ... and its underlying utility as a store of value ... with wit, expertise and a breath-taking range of examples. Kabir Sehgal's ability to tell this story across a wide array of societies and communities -- some of them non-human -- makes the book as fun to read as it is engaging to those of us who try to make a living working with markets. Sehgal brings the discipline of a banker, the curiosity of an archeologist, and the syncopation of a jazz pianist to his subject. The result is hugely insightful, engaging and ... [downbeat] ... fun.

Sehgal has rescued the history of money from the dead hands of historians, economists and theoreticians in this wonderful and insightful book. Coined lays out the evolution of money in the context of communities, societies and nations, and brilliantly shows that money is a "meta-tool" ... a tool from which all other tools are made. This book will make you change the way you read history, the way you see markets, and the way you view your own wealth.
Read more
One person found this helpful
Helpful
Comment Report abuse
See all reviews

William Jordan
3.0 out of 5 stars Useful compendium of ideas about money - its history present and future
Reviewed in the United Kingdom on March 14, 2015
Verified Purchase
A compendium of views on money, this covers: its potential origins (give and take in nature; debt and giving in a range of cultures; barter and the use of salt, barley and so on as units of account and stores of value; the hardwiring if our brains or the soft wiring - they light up at the prospect of financial gain); the hard and soft forms of currency, and the risks of debasement of the coinage or printing too much money (fir the first time I understood Gresham's Law); the possible future as money becomes even less embodied; religious teachings on money; and numismatics.

I learned something from this book and there was enough in it to keep me reading, mostly. But I felt it lacked somewhat an overarching thesis. And I didn't ultimately find it as gripping as I had hoped.
Read more
One person found this helpful
Report abuse

Laura
5.0 out of 5 stars Great read to understand where money came from and where we are goin
Reviewed in the United Kingdom on March 23, 2015
Verified Purchase
I think the book really can speak to people that do not know much about Fiance and would like to understand to where we got today. Great read and my husband chaim loved it too
Read more
Report abuse

Astha
3.0 out of 5 stars Niche area but good
Reviewed in India on January 20, 2019
Verified Purchase
The book is good for someone interested in this topic. However address a very niche audience. I couldn't find another book on a similar topic. If you are interested in knowing how money came into being in its physical form and acceptance of money
Read more
Report abuse

Amazon Customer
5.0 out of 5 stars Great book
Reviewed in Italy on September 29, 2020
Verified Purchase
Great book to read to get a fresh perspective on money
Read more
Report abuse
See all reviews

Page 1 of 1 Start overPage 1 of 1
This shopping feature will continue to load items when the Enter key is pressed. In order to navigate out of this carousel please use your heading shortcut key to navigate to the next or previous heading.
Back
Next
Pages with related products. See and discover other items: history of life, business history