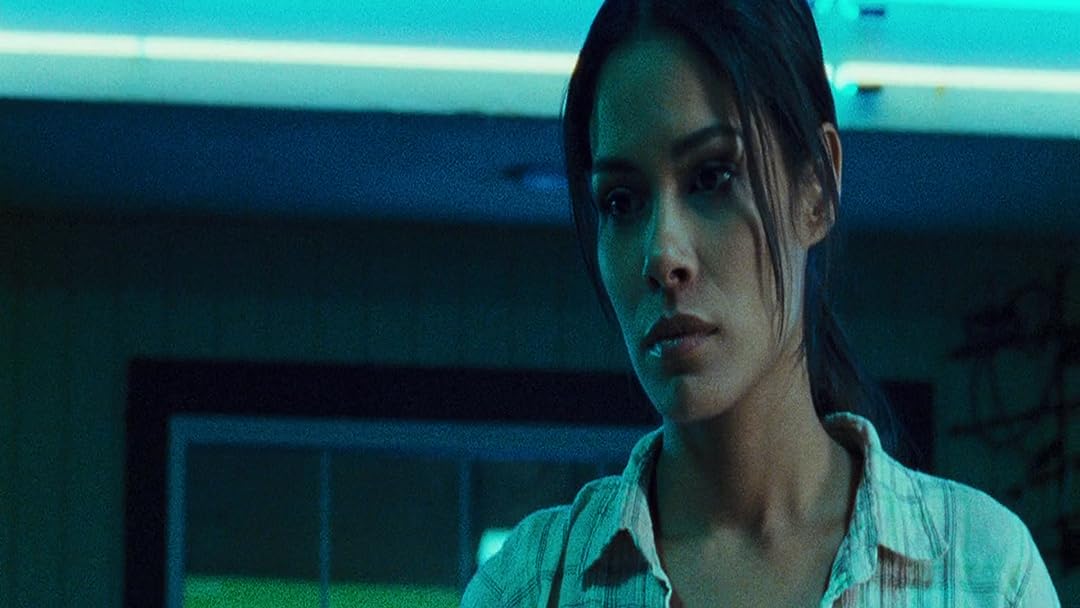 (773)
6.31 h 29 min2009X-RayR
Desperate to repay his debt to his ex-wife, an ex-con plots a heist at his new employer's country home, unaware that a second criminal has also targeted the property, and rigged it with a series of deadly traps.

David DurtschiReviewed in the United States on October 27, 2020
1.0 out of 5 stars
Really not very good... SPOILERS
Verified purchase
MASSIVE SPOILERS: This movie is similar to the Saw movies, where the only way to enjoy it, is to completely suspend belief that someone could or even would set up this elaborate trap for pretty much no reason. At least in saw he has all the time he needs to plan and set it all up; we are supposed to believe this guy completely rigged this whole house with traps (which really serve no purpose other than to entertain the viewing audience) in a matter of hours, but for some reason couldn't find one small girl in the house? There are so many massive plot holes, I could write pages on them, but basically, don't expect this slasher film to be at all believable. Oh, and as usual, the slasher (which is just some random guy posing as an exterminator) has super strength, super speed, super endurance, and super psychic powers, at least when the story calls for it. Also, final gripe, he put up 100 traps but not one camera?
8 people found this helpful

James C SmithReviewed in the United States on March 26, 2021
5.0 out of 5 stars
Excellent When Paired With Its Sequel
Verified purchase
AMAZON PRIME VIDEO

In all fairness, while I am now completely rewriting my review for this movie, I'm leaving my original review intact at the bottom.

Not only did it take more than one viewing for me to enjoy this movie, what really changed my view was watching the sequel "The Collection". That movie was superior in many ways, but more importantly, the two films work synergistically together to create a larger, and better overall story. They each make the other significantly better.

After viewing the first one once, I was not a fan. In fact, I gave it a mere 2.5 stars. Now, after taking in the sequel, I would give it at least 4.5 stars (for this genre), and highly recommend it to horror fans.

Sure it still has some pretty big plot holes, such as why set traps? (And where did he get the time and resources to do so?) But those same questions and holes apply to the Saw franchise. And, if fans can suspend belief there and just enjoy the ride, they should be able to also do so here.

The bad guy is truly bad, and the good guys are likeable, particularly the main protagonist Arkin.

The movie is well produced, and well acted, and the cinematography is superb. And forgetting the myriad plot holes, the writing is fairly good. The music is pretty good, as well.

Also, this may be a film that is best viewed after seeing the sequel.

The sequel is still in print on Blu-ray for a mere $10. Unfortunately, this movie is currently OOP, and is selling for just under $25. But, I still plan to buy it.

Unfortunately, the third movie in this trilogy was under development for 8 days, when the producers suddenly pulled the plug on it. The reason they gave was cryptic: "creative disinterest". So sell the rights to someone that's interested!

As a fan, this stings a bit, seeing each film ends as a cliffhanger.

How many times have you seen the opening statement "This film was inspired by true events."?

Of course, all that really means is that something in the news, or in a book, or just through the grapevine, sparked an idea for something quite different, but with perhaps certain similarities.

Hence, my title for this review.

This movie borrows heavily from the Saw movies' use of diabolical contraptions designed to kill and maim. And I mean HEAVILY. I guess I'd be fine with that, had it done so while also creating an overall compelling plot line.

For now, let's forget about the myriad plot holes, and simply look at the basic story. The writer and director failed to convince the viewer that this was truly leading anywhere. Instead, it was just a vehicle for presenting sadistic gore being doled out on innocent people by some maniac. There was no clear point or purpose to what this freak was doing to his victims-- not even at the level of someone criminally psychotic. It felt like Jigsaw took his act on the road, but forgot to bring any purpose along with him.

On the plus side, the production values seemed rather high. Good cinematography, scenery, acting, music, and special effects. But the film overall never really drew me in.

When it was over, I felt no chill like I did with "Halloween" or "Texas Chain Saw Massacre". To a degree, I was just glad that I finally made it to the end.

There is a sequel ("The Collection") on Amazon Prime Video, but they were charging for it, and I immediately told myself, "No thanks." But then I found I could watch it for free with a trial subscription to Cinemax. My curiosity got the best of me, so I did, and found that I liked it far more. So I watched it at least twice, then revisited this movie, and wound up liking it far more than I did the first time. Go figure.

This was designed to be a trilogy of films, but I learned last night on Wiki that the producers started filming the third installment, but then abruptly stopped for no clear reason, putting that in limbo. For fans, that third movie really needs to be made to complete this story, seeing each one ends as a cliffhanger.

Jake ShermanReviewed in the United States on April 15, 2018
4.0 out of 5 stars
Good movie, bad cliff-hanger ending
Verified purchase
This movie had a very original plot where we finally see a thief who is good at the bad things he does show his true nature and talent of working around the traps set by a psychopathic killer who is skilled at setting cunning (yet sometimes ridiculous) traps to "collect" the bodies of the people the protagonist originally intended to rob without harm. The ending was a twist and i really felt it revolved too much on the killer who's general background and face we were never introduced to, and left a cliff-hanger to why this coincidence pitted the two together and what happened to the thief's family he was trying to save from the beginning. Other than the ending, the movie was brilliant.
20 people found this helpful

RjReviewed in the United States on January 23, 2020
3.0 out of 5 stars
Good and Bad - Mild Spoilers
Verified purchase
There are some good and bad moments in the movie. I hated some of how the "collector" rigged the house. Who the F is going to spend that much time putting those traps in place. The likelihood that they would actually be tripped are slim. It's simply wasted effort. It makes no sense other than to entertain people watching a movie. And when did he do it? Since the parents were home it must've been after they were caught. Then that makes it even a bigger waste of effort.

Nonetheless, there are some entertaining moments. I still want to know what happens with his little girl. There is some character progression, but only in certain characters.
4 people found this helpful

Avid readerReviewed in the United States on May 22, 2020
3.0 out of 5 stars
Blood and gore fest
Verified purchase
Well clearly this movie is not based on the John Fowles book of the same title. It is a real gore fest, with plenty of torture and blood. But there are some real problems with the plot line. It starts during the day, and then the main character, Atkins, goes to rob the place that night after the parents were to have left. He finds the place booby trapped with some insidious contraptions, and windows boarded up. How did all that happen in the space of a few short hours? And while fake, I could have done without the cat scene. Unnecessary. It required delicate maneuvering for Atkins to not set off the traps, but later he finds Hannah hiding in the house, and she apparently had no problems avoiding the traps. I consider that a plot hole, big time. At the end of the movie, the ambulance suffers a massive accident, and that looked totally fake. There are other huge gaps in the ending that diminish the movie, and perhaps are setting up to make the villain a new character in a series of sequels.
2 people found this helpful

TrishReviewed in the United States on August 11, 2020
4.0 out of 5 stars
it's not perfect
Verified purchase
while this movie isn't perfect with plot holes, etc. It still gets me to watch every so often when there is abso nothing else new out at this time. Other than wanna be filmers taking advantage of the crisis we're in. I know, I know...who the heck can make all these 'traps' in a matter of hours? IDK and I don't care becaaaauuuse, the movie had me shouting out loud when I 1st viewed it. Like I'm going to tell them what to do? lol. I was thinking the same thing as others as in, who had time to set all this nonsense up?
Again, I didn't care because it's an edgy watch with suspense and I like Josh Stewart. Although sometimes his acting is a bit dull in other flicks. If you like horror flicks and don't question what the what is going on too harsh, you may like it. I did even through all the 'yeah right' moments I had.
One person found this helpful

DanielleReviewed in the United States on January 22, 2018
5.0 out of 5 stars
Really suspenseful but very GORY
Verified purchase
This is a super gory film but was really a lot better than I expected. Not one of those comical horror films you never hear about. Really interesting until the end.
17 people found this helpful

NikaReviewed in the United States on January 28, 2021
4.0 out of 5 stars
cant wait for the third one
Verified purchase
ever wanted to see "trapper" from dead by daylight?
well look no further because this guy know's how to set them up to rack up the kills.

good movie, decent acting, creative kills, lovely gore and all around just a fun little spin into madness of a silent collector.

movie is pretty straight forward, theif wants to get money on a job stealing a gem him and his crew have been staking out.
thief is pressured to do the job quicker as his wife is currently on the line with loan sharks pushing in on her and her late debt.

now the thief while avoiding deadly traps, must find a way to save him, the gem and maybe even some of the people remaining in the house without being killed and on a deadline before midnight.

good movie, loads of fish hooks, 10/10 women get's spider manned into a wall of spikes.
See all reviews
Back to top
Get to Know Us
Make Money with Us
Amazon Payment Products
Let Us Help You
EnglishChoose a language for shopping. United StatesChoose a country/region for shopping.
© 1996-2022, Amazon.com, Inc. or its affiliates