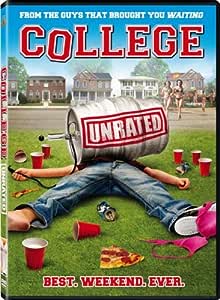 When three high school seniors (Drake Bell, Andrew Caldwell and Kevin Covais) visit Fieldmont University as prospective freshmen, they're expecting the best weekend of their lives. But the trio's raunchy F.U. adventure takes a harsh turn when they're subjected to endless humiliation by the rowdiest frat house on campus. With no choice but to fight back, the boys retaliate with an outrageous scheme to avenge their tormentors, destroy the fraternity - and win the hearts of three sexy sorority girls in the process!

College tells the same threadbare story as a dozen other movies about wide-eyed newcomers arriving at a college campus and finding an institution of higher learning to be a focal point of debauchery. Drake Bell (of TV's Drake & Josh) stars as Kevin, a cautious high school senior who gets dumped by his girlfriend for being boring. Determined to be a free spirit, Kevin pays a pre-enrollment weekend visit to a university with his best friends, the uptight Morris (Kevin Covais) and licentious Carter (Andrew Caldwell). The trio are soon absorbed into the black hole of an obnoxious fraternity and subjected to ritual hazing of a nauseating order. Things go from bad to worse when Kevin becomes attracted to a sorority girl (Haley Bennett) targeted by a frat leader for seduction. A kind of war breaks out between the newbies and their frat tormentors, forcing Kevin, Morris, and Carter to face up to their internal conflicts and fight back against a common enemy. College might have the semblance of a narrative, but it's really the same old grab-bag of youthful depravity, with the bar raised pretty high in a couple of sordid scenes. There's a strong influence here of Superbad (Bell, Covais, and Caldwell's characters are essentially the latter film's Evan, Seth, and McLovin in personality and style). But unlike Superbad's persuasive humanity, College is merely trying to temper outrageousness with faux sensitivity. It doesn't work, and the film feels like it goes on forever. --Tom Keogh

Rocket Stonesifer
5.0 out of 5 stars A very funny movie.
Reviewed in the United States on June 5, 2020
Verified Purchase
The item was delivered on time, and in excellent condition.
Read more
One person found this helpful
Helpful
Comment Report abuse

Julia phillips
5.0 out of 5 stars it arrived on time
Reviewed in the United States on April 8, 2020
Verified Purchase
Thank you it was a good movie I enjoyed it
Read more
One person found this helpful
Helpful
Comment Report abuse

AWOL
4.0 out of 5 stars I like it
Reviewed in the United States on April 6, 2017
Verified Purchase
This movie is funny. I really liked it when I saw it in theaters. It's the typical raunchy comedy about guys about to graduate high school and doing crazy things. Drinking, drugs, sex, shenanigans... Also, I'm a fan of Drake Bell, and I was glad to see him play a more daring role.
Read more
One person found this helpful
Helpful
Comment Report abuse

Amazon Customer
3.0 out of 5 stars Expected alot more from a film like this
Reviewed in the United States on August 20, 2015
Verified Purchase
There are a few topless only women. Half the women have fake breasts.
Read more
One person found this helpful
Helpful
Comment Report abuse