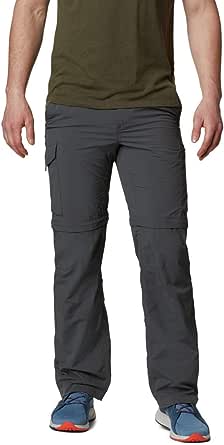 Specially crafted for the active man, the Columbia Silver Ridge Convertible Pant is the ultimate outdoor staple. Crafted of 100% nylon and Columbia’s signature ripstop fabric, these pants remain lightweight, yet durable, no matter the weather or activity. High quality materials and expert craftsmanship are the backbone of Columbia’s men’s apparel.

The technology featured in these pants is unmatched. The interior layer is made up of Columbia’s signature wicking fabric to ensure a sweat-free, breathable day of activity, while the protective exterior features UPF 50 to help block and shield from UVA and UVB sun rays. The Columbia Silver Ridge Convertible Pant is also durable and comfortable - with one zip, go from pants to shorts instantly; the gusset detail and hook and eye closure give them a personalized fit. Columbia offers our men’s outdoor convertible pants in multiple colors and sizes. To ensure the size you choose is just right, please refer to our sizing chart. To find your waist measurement, measure around your natural waistline. And for your inseam measurement, measure from the top of the interior leg to the bottom of the ankle.

4.5 out of 5 stars
4.5 out of 5
9,239 global ratings
How are ratings calculated?
To calculate the overall star rating and percentage breakdown by star, we don’t use a simple average. Instead, our system considers things like how recent a review is and if the reviewer bought the item on Amazon. It also analyzes reviews to verify trustworthiness.

Amazon Customer
3.0 out of 5 stars If you are larger or more muscular build- READ!!!
Reviewed in the United States on January 26, 2018
Color: GravelSize: 36W x 32LVerified Purchase
Pants are great as far as durability, design and functionality that you would expect from the other reviews they truly are great pants. Sizing is hit and miss depending on your build. 3 stars for the inconvience of having to reorder and ship product out and wait for it again.

Pants have a slimmer cut to them through the butt and thighs (if you are muscular or have a bubble bum- you WILL have problems). Waist size was about 1 size off (wear 34, need a 36). Due to the cut of the bum and upper legs, wearing a base layer or longer underwear (I had lightweight Merino underneath) was uncomfortable and did not leave enough play in gusset and stitching that I would be comfortable kneeling, stooping and moving around in them as desired.

Overall, if you are a "normal" or "thin" build, these pants for sizing should be great. If you consider yourself "muscular" or on the heavier side, order a full size up than what you need. These pants were not designed for us bigger more athletic guys.

C. Wallach
5.0 out of 5 stars 3 year review from the desert of Qatar to the mountains of Appalachia
Reviewed in the United States on November 1, 2017
Color: GrillSize: 36W x 30LVerified Purchase
The pants have a relaxed waist, stretchable. I've hiked with them on 40 degree scouting trips through the Appalachia's and also in 120 degree heat in the desert in Qatar. They are made of polyester, which naturally absorbs zero moisture vs cotton which absorbs 27 times its weight in water. That means they will dry very quickly. A couple hours out on a line will dry them effectively, or being worn after a rainstorm. Because they don't absorb much moisture, they are surprisingly warm, and they do a decent job of blocking the wind. That wind resistance is what makes them OK to hike in fall/spring weather when the temperatures are in the upper 40s, lower 50s. You'll want a thicker material if hiking in anything colder than that.

In extreme heat, they do wick the moisture away. In Qatar I found that after travelling 200 ft from an air conditioned bunker across the desert (and it's a wet moisture due to the Persian Gulf), you were completely drenched in sweat. That heat is just a few degrees away from being the maximum that people can endure due to the moisture in the air. The paints would dry quickly once inside again, and protect you from the sun. They are a very light cloth that doesn't feel uncomfortable in extreme heat.

I would say the durability is pretty good, I've had one of the forward pocket in one of my paints fail due to the stitching, and some of the material is now starting to look thread bear.

For those doing things on the water, I've found these shorts travelling in a rigid inflatable boat in salt water will again dry pretty quickly after being dosed by a bow wave, cotton underwear will be your down fall! Salt absorbs water, and in and of itself can quickly lead to rashes, this fabric absorbs no saltwater per say, so will dry especially if you splash down with a bit of fresh water shortly after you've landed. In sum, they are very effective pants to wear while boating.

They pack very light, and do not show wrinkles. You can pack them down in a backpack and they weight almost nothing and take up very little room. The bottoms are compact enough you can remove them and put them in the front pockets.

The belt isn't very fancy, but I haven't had any fail, and I've found they are the ideal size for emergency tourniquets (tie it, don't use the buckle), which I've had to do. It's probably not everyone's list of reasons to buy a belt, but unlike leather and dress belts, this can be used to synch something down. I've also used it to synch down loads backpacking when I couldn't find anything else and SUV roof racks.

The color works well, and unlike everything else I have, has never born out a stain. Again, that's a nice feature of polyester, the dye is permanent, everything else washes away like engine grease, blood, mustard, dirt. When wet they don't look obviously wet with the color unlike the lighter versions. They don't fade, or pile, but will eventually start to wear, like everything else.

In appearance, they aren't formal wear, but from casual dining in Doha to Annapolis, they fit the bill. Of course, they don't look out of place on a military base or a camping trip. They aren't so GI that they scream "search me for hidden weapons and cans of chewing tobacco".

Overall I say they deserve around 4.5 stars, with the sole objection being a bit better stitching for the pants pockets, though I have carried probably fairly heavy things in them, so they were under a bit of load.

distracto100
2.0 out of 5 stars poor fit!
Reviewed in the United States on May 22, 2017
Color: DeltaSize: 32W x 34LVerified Purchase
The more I try on other convertible pants, the stronger the inclination I have to hate these.

Why would you take pants meant for hiking, or at least being outdoors, and design them with a tapered thigh section so narrow they pull against people's thighs with every step? Specifically, think of going up stairs (or climbing a hilly incline) when you have to lift your feet higher in order to ascend vertically.. these are the steps when the fabric of any pant will rub and catch most on your moist, sweaty legs.. in the context of a day-long hiking, it makes each step that much more tiring when you have to fight against your pants; in the context of these pants that problem is even worse as they get so thigh-narrow they maximize that pull... and I have normal-dude thighs.. I haven't seen leg day in the gym for years...

Moving on, you figure one design flaw is enough, yea? Oh wait, how about those front pockets, lets make those smaller, because no one takes front pockets seriously anyways, yea? I stuck a ruler in the front pockets and couldn't find any way to put it deeper than 4 and 1/2". I can still see my wrist when I put my hands in those pockets.. why.... would they do that?

..if you can get over the tight thighs (I couldn't) then perhaps the only merit to these pants is how light the nylon is compared to other convertible pants.. so maybe they'll stay cooler in hot climates.. just too uncomfortable for me to try and find out
Read more
141 people found this helpful
Helpful
Report abuse
See all reviews

I've been a big fan of Columbia since my spell living stateside and while they don't always get it right, their trekker pants and 3-in-1 coats are in my opinion better quality and value than North Face.

These pants mark a departure from my prior favourites (their Titanium line) in a good way. The older Titanium clothes were built extremely solidly, but could be unforgiving on you with respect to seams, and stiffness of fabric. If you were wearing a baselayer, then it wouldn't matter.

These are lighter and exhibit none of those problems. Indeed, the material is light, soft yet tough, with other benefits, such as quicker drying time. They are also cut a little more generously to give better freedom of movement, without you looking like a sailboat in the wind.
Read more
One person found this helpful
Report abuse

Rob Roy
5.0 out of 5 stars Great pair of walking trousers
Reviewed in the United Kingdom on June 6, 2017
Color: GravelSize: 34W x 32LVerified Purchase
Great trousers that are very comfortable. Bought for 13 days in the Himalayas as a spare pair. Wore them lots and they are great. Would definitely recommend. Much cheaper than other brands as well but easily the same quality I would say.
Perfect for warmer conditions - wouldn't rely on these if walking in below zero temps
Read more
2 people found this helpful
Report abuse

Matthew Curry
4.0 out of 5 stars Very Comfy, Easy Zip on Zip off.
Reviewed in the United Kingdom on February 25, 2019
Color: GrillSize: 32W x 32LVerified Purchase
I first put them on and was concerned they were a bit tight - I think they are designed to be like this however as they were very comfortable on my 2 day 30 mile hike. Being obsessed with simplicity I was also worried upzipping them into shorts and reattaching them would be a pain - turns out it was easier than anything, would reccomend.
Read more
2 people found this helpful
Report abuse

T. Searle
3.0 out of 5 stars OK but a little tight
Reviewed in the United Kingdom on January 8, 2020
Color: TuskSize: 34W x 34LVerified Purchase
No problem with the trousers as such but I'd advise buying a waist size up if in any doubt. These are usually for warm/hot conditions anyway and you'll welcome the extra slack/movement. Zip on/off is easy enough
Read more
Report abuse
See all reviews