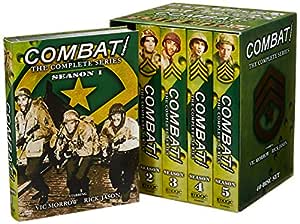 Note on Boxed Sets: During shipping, discs in boxed sets occasionally become dislodged without damage. Please examine and play these discs. If you are not completely satisfied, we'll refund or replace your purchase.

4.8 out of 5 stars
4.8 out of 5
538 global ratings
How are ratings calculated?
To calculate the overall star rating and percentage breakdown by star, we don’t use a simple average. Instead, our system considers things like how recent a review is and if the reviewer bought the item on Amazon. It also analyzes reviews to verify trustworthiness.

I recorded all 152 episodes of "Combat!" on VHS tapes when the series was shown many years ago on the "Action Channel," and more recently, I recorded the series again on DVDs when it was shown on "Me TV." The picture quality of my old VHS tapes is actually much better than that of my more recent DVDs, but watching shows on VHS tapes today is not nearly as convenient as using DVDs. For several years now, I have been interested in buying the subject DVD set, but there were many customer reviews in past years which cited various problems with the set. In the past year, the customer reviews have been virtually all positive, so I again became interested in getting the DVD set. Wanting to get the convenience of modern DVDs as well as hopefully getting a better quality picture, I finally decided to purchase this "Combat!" DVD set.

The set consists of forty DVDs - eight DVDs per season for five seasons, four episodes per DVD, and some DVDs include additional video material. Each DVD has one or more voice interviews with various people associated with the show, and there are also several videos of some of the actors being interviewed many years ago. Most of the DVDs include a commentary by the director of one of the episodes featured on that DVD. Each episode also includes notes on that episode provided by Jo Davidsmeyer and titled "Notes, Oddities, and Bloopers."

There were several old reviews which complained of poor picture quality, but this is not the case with the DVD set I bought. The picture quality is absolutely great. I have to wonder if the folks who had poor quality might not have purchased knockoff copies rather than an original set as advertised?

Another person stated the episodes were missing scenes because they were less than sixty minutes. All of the episodes run about forty-seven minutes because each episode is shown without commercials. There is even an old interview with Vic Morrow where he is asked about making a one hour show each week, and Morrow corrects the interviewer and clearly tells him the shows actually are designed to have a run time of forty-seven minutes for the one hour time slot. This was also the case with the episodes when they were shown on the "Action Channel" which ran them without commercials. Each episode was almost exactly forty-seven minutes.

One person noted there were a few episodes where the show just stopped at some point and would not continue. Another person said he was missing all the DVDs from one of the season's box. I also have had three episodes where the show just stopped, and I had to skip over a portion. I wrote to the vendor about the problem and received a prompt standardized reply. It listed some procedures to attempt to fix the problem by cleaning the disc. At the end of the letter, it clearly stated they would replace any discs that were truly defective, and I would assume they would also replace missing discs. Since the reply I received was a photocopy of a "How To" disc fix, I assume they do get some defective discs in a forty disc package. That does not bother me as long as they do replace the discs if they are truly defective.

Did I mention the shows in this DVD package have absolutely great picture quality? They really do, and I am truly enjoying the convenience of watching this great "Combat!" series with the convenience of DVDs. The next thing I would like to do is see if I can get them to show closed captioning, and then I would like to copy the shows to a hard drive that I can connect to a TV and watch them without having to switch DVDs.

I watched "Combat!" when it first aired. By the second season, I was married, and my wife and I watched each week with her brother (a WW2 infantry vet) and his wife. It remains my favorite TV show of all time.

D.Henderson
5.0 out of 5 stars highly recommend this DVD box set
Reviewed in the United States on March 18, 2017
Verified Purchase
Highly highly recommend this DVD box set! Vic Morrow, Rick Jason and company did a superb job with this five season series. Still feel that Morrow was one of the most underrated actors of his generation and sad that almost all of the great (main) actors in this show never graduated to bigger and better roles after this series, however there were several famous actors; starting and later stardom, that had cameo roles in various episodes that acted superbly. Having watched this disc set several times, am still fascinated by the creativity of the directors, producers and the writers with their great camera imagery and imagination filming this classic show.
Would like to give at least ten stars and two enthusiastic thumbs up for this great/classic series!!
Read more
17 people found this helpful
Helpful
Report abuse

Robert S. Seddon
5.0 out of 5 stars Excellent Action
Reviewed in the United States on July 4, 2018
Verified Purchase
GREAT series.. one disk was damaged, and this seller prefaced it within 3 days! Excellent depiction of WW2 action in the US Army in Europe, although set up with Hollywood extras for effects, and not totally accurate for machinery (P51 Mustang tricked out to be a Luftwaffe fighter and old US Army tanks tricked out to be German Panzers) this was a great series that I watched with my father every Wed night until his death, as he was a Sea Bee commander in the great WW2 in Europe.
ONE WORD.... EXCELLENT ACTION !!
Read more
8 people found this helpful
Helpful
Report abuse

Bravo16
5.0 out of 5 stars A must see for Baby Boomers and Millenials alike.
Reviewed in the United States on February 18, 2015
Verified Purchase
Have not finished all 40 discs yet, whew!, but watching one a day without commercials is a joy. I remembered the series when I was 9-14 years old and it played a factor in my joining the Army as a combat arms armor officer. Not as polished as Band of Brothers or Saving Private Ryan (the Germans use WWII American halftracks and post-WWII American tanks, and for some strange reason WWI maxim machine guns instead of the Spandau superior machine gun) but given the limitations of the day completely succeed in depicting realistic combat. Use of stock black and white footage from the war is a nice touch. Just about every good actor in Hollywood appeared in the series as guest stars whether they had made their reputation yet or not. The episodes directed by Robert Altman are gems. I would like to know why the series ended after the fifth season. Was it related to the Vietnam War then escalating? A real tragedy is the untimely death of Vic Murrow sometime later, killed in a helicopter accident while filming an unrelated movie. He was, an would have been, a great actor, al la Audie Murphy, who also died prematurely (airplane crash I believe).
Read more
22 people found this helpful
Helpful
Report abuse

Imre Demech
5.0 out of 5 stars Grew up watching Combat on tv & grew up for ...
Reviewed in the United States on May 3, 2017
Verified Purchase
Grew up watching Combat on tv & grew up for the draft in the Vietnam War. They were showing Vic Morrow's Combat at certain Army bases in Vietnam by the Special Services, believe it or not. I put off buying it for yrs until I got my home theater set up & a video library of over 800 movie titles. Westerns are my favorites & I now have a complete war library of all time feature film classics & the few TV series China Beach, Rat Patrol,The Gallant Men. Finally got Combat .It came back on cable tv in the early 2000 yrs after 40 yrs. Can't find anymore on tv.
Read more
11 people found this helpful
Helpful
Report abuse
See all reviews

Tom T.
5.0 out of 5 stars Five Stars
Reviewed in Canada on May 10, 2018
Verified Purchase
One of my favorite shows growing up, discovering episodes that I have not seen. Some damage to the packaging but the DVDs were fine
Read more
One person found this helpful
Report abuse

K. Hollingshead
5.0 out of 5 stars Super fast delivery
Reviewed in Canada on August 20, 2018
Verified Purchase
Item arrived earlier than estimate! So far quality of disks is good, one froze half-way through one episode. Disk holders are not well made, hinges are falling apart. Great to see this series from my youth, lots of memories!
Read more
Report abuse

Lloyd Dole
5.0 out of 5 stars Perfectly restored for DVD.A must have for all fans of the best TV war series.
Reviewed in Canada on February 16, 2013
Verified Purchase
You must remember this,sitting with your WW2 veteran Dad and absorbing the travails of Sgt.Saunders Lt. Hanley,Kirby,Cage,Doc and Littlejohn.A real time trip back to an ahead of it's time production.Vic Morrow especially stands out as a vastly under-appreciated actor. A superb look back at the Greatest Generation saving the world.Nothing dated about this classic.A TV show filled with movie production values.
Read more
6 people found this helpful
Report abuse

Randall Harris
5.0 out of 5 stars Great service
Reviewed in Canada on May 5, 2020
Verified Purchase
Was on my wish list for 7yrs.
Was finally able to get It.
Remember watching it in my youth.
Great show.
Read more
Report abuse
See all reviews