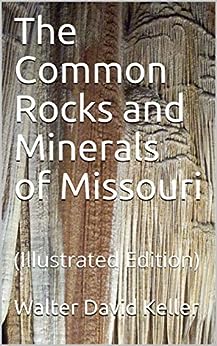 by Walter David Keller (Author) Format: Kindle Edition
See all formats and editions
Sorry, there was a problem loading this page. Try again.
Missourians are interested in the rocks and minerals which they find on their farms, in excavations, and while on their vacation trips. Some of the specimens are unusual in shape or appearance, some are crystalline and beautiful, some may be ores of economic importance, but many simply arouse the curiosity of the finder.

Many of these specimens are received each year at the University at Columbia, and each is usually accompanied by a request for information on the correct name for the specimen, its composition, its commercial value, and the manner of its formation.

Frequently the requests include questions of a broader geological nature, or seek the recommendation of a general, easily-read book written on rocks and minerals which may be purchased at a book store or consulted at a library. Moreover, many persons ask how they may determine for themselves the geological specimens which they have collected.

This little booklet has been prepared with the intention of answering the questions most commonly asked by citizens of the state about Missouri rocks and minerals.

Descriptions and photographs of Missouri rock and mineral occurrences are provided, and essential facts about the geological conditions of their formation are simply told. A determinative key is supplied in order that the reader may identify and name most of the common specimens which he collects within the state (and elsewhere, also). No special determinative equipment will be suggested, and only non-technical language will be employed because the chief objective here is to furnish a useful, understandable geological account of the common Missouri rocks and minerals to the average person without geological training. In fact, for the purposes of identification no differentiation is made between mineral and rock, although the professional geologist does separate them in definition. For our purpose, a rock is an aggregate of mineral particles, but a mineral is a substance (without life) having more definite and constant properties than a rock. For those interested further, more technical and more nearly correct definitions, with explanations, are given at the back.

The rarer minerals and those requiring special equipment for determination may be sent to the Department of Geology of the University of Missouri at Columbia for identification free of charge.

Names used locally, and sometimes incorrectly from a strictly technical sense, for rocks and minerals will follow the generally accepted names, and both will be duplicated in the index at the back of the pamphlet to facilitate finding either one.

5.0 out of 5 stars
5 out of 5
3 global ratings
How are ratings calculated?
To calculate the overall star rating and percentage breakdown by star, we don’t use a simple average. Instead, our system considers things like how recent a review is and if the reviewer bought the item on Amazon. It also analyzes reviews to verify trustworthiness.

There are 0 customer reviews and 3 customer ratings.
Back to top
Get to Know Us
Make Money with Us
Amazon Payment Products
Let Us Help You
EnglishChoose a language for shopping. United StatesChoose a country/region for shopping.
© 1996-2022, Amazon.com, Inc. or its affiliates