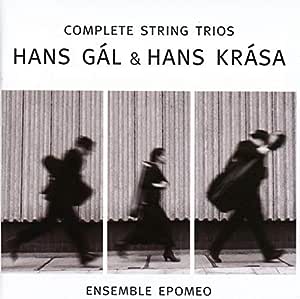 Having released numerous world premiere recordings of Hans Gal s symphonic and concertante works to critical acclaim, Avie turns to the composer s chamber music, specifically the two works he wrote for string trio. Performed by Ensemble Epomeo, the world premiere recordings of Gal s Serenade for String Trio, Op. 41 and Trio, Op. 104 are paired with works by Gal s contemporary Hans Krasa. The Austrian-born Gal and Czech-born Krasa shared a Jewish heritage, but while Gal escaped Nazi oppression, Krasa was interred in Theresienstadt then sent to Auschwitz, where he perished in 1944. Tanec and
Passacaglia & Fugue were written in the last year of his life.

Founded in 2008 on the slopes of Mount Epomeo at the Festivale di Musica da Camera d Ischia in Italy, Ensemble Epomeo consists of three virtuosi dedicated to the expansion of the string trio repertoire and exciting,
innovative, and engaging approaches to performance. Ensemble Epomeo are
quickly becoming a favorite at international music festivals on both sides of the Atlantic. This release marks their commercial recording debut.

M. P. Harvey
5.0 out of 5 stars Profoundly moving CD
Reviewed in the United States on January 27, 2014
Do not let "Dan"'s review confuse you. This CD does contain the complete works for string trio (the traditional string trio lineup is violin, viola and cello) by these two composers. Dan's review refers to a piano trio by Hans Gal- that's a separate genre.

Anyway, these four works are major discoveries- infinitely listenable and incredibly moving, all the more so when one considers the circumstances under which they were written. Ensemble Epomeo play with precision, nuance and power.

You can read a longer review of the CD (by Steve Arloff) at MusicWeb, where it was Recording of the Month:

Don't be put off by a review by someone who doesn't know the difference between a piano trio and a string trio, and who obviously hasn't heard the disc. You'll love it- I did.

Stefano Gulizia
5.0 out of 5 stars Telepathic Chamber Music
Reviewed in the United States on July 22, 2013
It is hard to think of composers of perhaps insufficiently recognized importance in the chamber music canon such as Hans Gál and Hans Krása. And there could hardly be a more serendipitous alliance than for them to be performed by Kenneth Woods and his Ensemble Epomeo, featuring Caroline Chin at violin and David Yang at viola. Both in his musical writing and in his score reading, Woods is fiercely committed to ideals of clarity and transparency and the results are always exciting and often astonishing, as they are in this case as well as in his interpretation of Gál's and Schumann's Symphony No. 3, where he adds an extra layer of 'Mahlerian' spatial articulation by having the violins antiphonally seated.

Half-way between a burial-place and a dwelling-place, the string works played by Ensemble Epomeo speak both elliptically and proleptically about the disintegration of this great culture; their stony recitation--their consummate craftsmanship, a concern for suppleness that culminates with falling, quavering motifs and a wonderful variety of cadential closes--moves on the border between private and public, neither awake nor dreaming. Always skillfully orchestrated, Gál's compositions mark the footprints of their author's trajectory, from the youthful burst of lyricism influenced by Zemlinsky (among others) to the late Idyllikon, op. 79, scored for small orchestra, which is one of the musical equivalents of Robert Musil's hortus conclusus: a paradise garden where we are invited to join in, knowing that the person who lives there has already turned his back on to the world.

The chamber music performed by Woods and his Ensemble Epomeo are an exemplary site for thinking together not only about the legacy of Hans Gál and Hans Krása, but also about the current state of Entartete Musik as belonging to a time that is 'out of joint', for thinking about spectrality and for thinking about a future of small-sized orchestral music whose enlightenment is indissociably bound with the exemplarity and clarity of their execution and what they have to teach us.

(Read my full piece on this at [...]
Read more
5 people found this helpful
Helpful
Report abuse

Dan D. Richards
1.0 out of 5 stars Complet is not Complet
Reviewed in the United States on May 12, 2013
The thing that sticks out immediately about this album is that the CD of the COMPLETE string trios of Hans Gal is missing the Piano Trio (E major)for piano, violin and violoncello, Op.18 (1924).

Amazon Customer
5.0 out of 5 stars Arrived well packaged and on tme.
Reviewed in the United Kingdom on January 30, 2020
Verified Purchase
I wanted To acquaint myself with music suppressed by the Nazis and to note how the human spirit can rise above such horrendous mistreatment.
Read more
Report abuse
See all reviews
Pages with related products. See and discover other items: hans gal