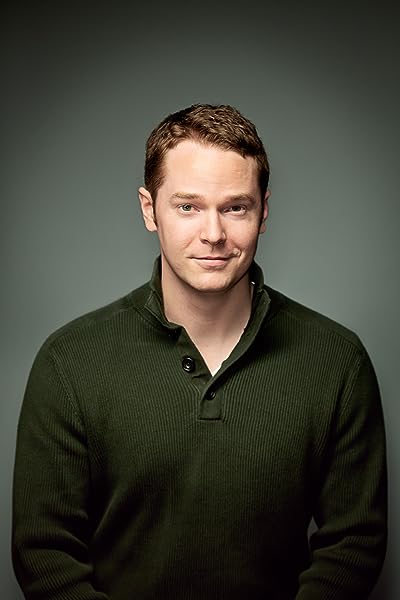 Robert Jackson Bennett was born in Baton Rouge, Louisiana. Winner of the Shirley Jackson Award, the Sydney J. Bounds Award, and an Edgar Award, he is the author of the novels Mr. Shivers, The Company Man, The Troupe, American Elsewhere, the Founders trilogy, and the Divine Cities trilogy, which was a 2018 Hugo Awards finalist in the Best Series category. Find out more about the author at www.robertjacksonbennett.com.

Start reading The Company Man on your Kindle in under a minute.

It is a science fiction of a different bent. A combination of SCI FI, gritty noir, and almost steampunk. It takes place around 1920 on the west coast of American in a city fueled by fantastic technologies but mired in poverty and dark secrets. While this is an alternate history story, it is written a lot like the old 1930's and 40's SCI FI, social philosophy, and detective novels/movies many of us grew up on. The story has a nostalgic feeling that is overshadowed with knowledge from today. The reader finds herself sometimes a step ahead of the book's characters based on what we know today, but then deliciously falls behind the characters' understanding as the plot progresses and new twists unfold.

The three main characters in the book are very intelligent and special. They are definitely a product of their times. They exhibit what I would call an old fashion sense of honor and romantic vision, while still fighting their own internal demons. The main character of the three (though all are dominant to the story) is uniquely gifted and terribly tortured by this gift. The secondary characters are of course less resolved, but still distinct. And the bad guys have many grey edges.

The plot is convoluted but never confusing. While I figured out where some things were headed, I still found myself surprised and happily confounded. There are internal and external battles, moments of great sadness, horror, and death, but also a theme of strong friendships, duty, honor. And Mr Bennett's poetic style of writing, his beautifully descriptive prose, overlays wonderfully over the entire setting. I won't forget this book, these characters, this city, or this world any time soon.

A different but fantastic read. I loved it.

joseph weiss
5.0 out of 5 stars A combination of Stephen King and Jack McDevitt
Reviewed in the United States on October 25, 2020
Verified Purchase
Robert Jackson Bennett is awesome. I started with his City trilogy a few years ago and am working my way backwards and forwards with his impressive works. He is a versatile creative author with wonderful storytelling skills and great and interesting characters.
The Company Man is set in the not so distant past, the early 1900’s, with a few significant changes to the world. It hits on one of my favorite combinations, mystery with an important touch of science fiction.
You cannot go wrong with any of his books in my current experience...

Stella CarrierTop Contributor: Writing
TOP 1000 REVIEWER
5.0 out of 5 stars Opposite Of Utopia Thriller Story
Reviewed in the United States on September 3, 2020
Verified Purchase
This kindlebook The Company Man by Robert Jackson Bennett is a thrilling crime/the opposite of utopia type of thriller. Some shocking incidents pertaining to deaths that are union referenced, the mayoral office receiving plenty/more highly than normally coverage from prominent papers covering certain circumstances, one of the character’s money/financial paychecks coming from a business partially managed by a San Francisco California shipping firm and another part of the United States, and more.
Read more
Helpful
Comment Report abuse

Spoon
4.0 out of 5 stars Book Noir
Reviewed in the United States on November 25, 2014
Verified Purchase
Cyril Hayes is a Company man for the McNaughton Corporation. In this alternate Earth tale taking place in the 1920's, McNaughton is the largest company in the world, and Hayes is their top troubleshooter. Hayes has had a tough life due to his ability to "read" people, whether through a knack of some kind or through some psychic talent. A talent that drives him to drink and drugs.

The action takes place in Evesdon, the Company's home city on the ocean somewhere in the American northwest. Hayes has been investigating a murder with the local police that may or may not be union-related. Things move slowly until eleven more Company employees, all union activists, are mysteriously murdered on a subway car. Hayes is then provided with an assistant in order to get to the bottom of it all before the Company gets blamed.

This book is a real "film noir" story, moving slowly but inexorably toward the end. You'll need some patience as story parts are brought to the fore, set aside, and revisited as the book goes on, but the patience is worthwhile.

Since the late 1800s, the McNaughton Corporation has provided incredible technological wonders to the world, the source of which is quite mysterious, and the wonders are much more advanced than anything in our own timeline in the 1920s (for example, at one point early in the novel there is a failed attempt at launching an orbital vehicle). These miraculous inventions, and their source, become key to the story as Hayes attempts to get to the story behind the story that his bosses are throwing at him. The various subplots all come together nicely by the time Hayes and the reader figure out what's really happening here.

The city of Evesdon reminds me a little of New Crobuzon from "Perdido Street Station" in terms of all of the nooks and crannies and history and differing people within the city. This "shining metropolis" that is supposed to be the showcase for the McNaughton Corporation is, of course, anything but. Just as most cities have a dirty underside, Evesdon surpasses that with many levels of dirty underside, both literally and figuratively. Indeed, the city itself plays as large a part in this novel as any of the main characters.

Bennett has fleshed out a nice piece of universe in this story. I'm hoping he revisits it at some point.
Read more
2 people found this helpful
Helpful
Comment Report abuse

J Allis
4.0 out of 5 stars I am glad I read this
Reviewed in the United States on February 3, 2015
Verified Purchase
Very cool book. I don't think I'm the first to describe it as kind of steampunk noir. I came across a rec for this exactly when I was in the market for something that stood out as different and unexpected from the vast usual body of fantasy/sci-fi, and it delivered beautifully. As befits a first book, the writing is a little rough around the edges, but it doesn't detract from the reading experience and in fact I felt the roughness suited this particular story very well. I'll definitely be looking up this author's other work.

This isn't precisely a happy story (as befits something described as 'noir'), and it's not a romantic story. Both of which I am very grateful for, but some people might be disappointed.
Read more
One person found this helpful
Helpful
Comment Report abuse
See all reviews

HollowJ
4.0 out of 5 stars more than a 20s detective story
Reviewed in the United Kingdom on October 1, 2018
Verified Purchase
Having read "The Troupe" and really enjoyed it, I thought I would try this book.
In general it is very good, as another reviewer said, it has some of the China Mieville about it, which moves it from a straight detective story into something much more wierd.
I did find the last part of the book weaker though; as the final secret was revealed it felt to me like a bit of a sci-fi cop out, which was a shame, though perhaps he had written himself into a corner.
Bit still, I would recommend this book.
Read more
Report abuse

AmazonMonster
5.0 out of 5 stars Extremely Enjoyable
Reviewed in the United Kingdom on October 5, 2011
Verified Purchase
Having read Mr Shivers and enjoyed that, I decided to read Mr Bennett's next novel. I can't put it down - it's like reading a China Mieville without the occasional obtuse chunks of "literariness" (ok I made that word up) that can litter his work. The world is well realised and fascinating, the characters are vivid making you actually care about what is going to happen to them - whilst all the while your hind brain is wondering what the conclusion will finally reveal. More please.
Read more
2 people found this helpful
Report abuse
See all reviews

Page 1 of 1 Start overPage 1 of 1
This shopping feature will continue to load items when the Enter key is pressed. In order to navigate out of this carousel please use your heading shortcut key to navigate to the next or previous heading.
Back
Next
Pages with related products. See and discover other items: historical gothic mystery suspense