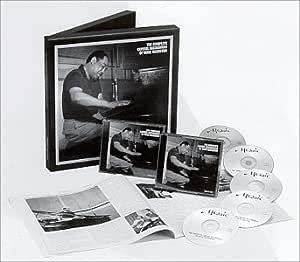 Historians and some Duke Ellington fans look askance at the brief period he spent on Capitol Records (1953-55). This was a hectic period in jazz, with bebop in the near-view, hard bop coming along as well, and the big band was considered by many to be a relic of bygone eras. Yet Ellington persevered, and not without another adversity: the temporary loss of signature alto player Johnny Hodges, who was off leading his own bands. The resulting five CDs worth of material collected here show an Ellington band more aimed at repetition, both of its own repertoire, which had sounded better in the 1940s, and of other bands' material. Singer Jimmy Grissom does a good job with the Ellington band, without the velvety, almost spooky polish of Herb Jeffries (as evidenced on the astounding Blanton-Webster Years collection) but with a sureness that even sounds like jump blues in spots. What comes from the full-band tracks here is a clear demonstration that Ellington's outfit was sharp in the early '50s, with Juan Tizol and Ray Nance playing at a peak. But what's invaluable from this box set are the Ellington small-band tunes. The piano-trio cuts, available separately on Piano Reflections, present Duke as a keyboard polymath, dropping modernist touches in his spacing and phrasing and still managing a great deal of coloristic depth. And then there are the totally startling long blues tunes with Ellington on electric piano. Preeminently interested in everything that seemed musically possible, Ellington makes the tunes shine. This collection serves as a long-form rebuttal to all the naysayers who scoff at the Duke's early 1950s work. --Andrew Bartlett

Thomas E. Young
5.0 out of 5 stars Always Moving Forward, Never Looking Back
Reviewed in the United States on January 10, 2003
Mr. Ellington always looked forward with his music; he never looked back. His music was his mistress, and he took her in the directions that he saw fit.
As well documented in these CDs, by the early 1950's, Mr. Ellington had completed the redefinition of his sound in "modern" terms, much to the dismay of those who, to this day, always look at his pre-modern past as some mythical "golden" age; in point of fact, for Ellington, this modern transition began in the pivotal 1946-1947 period.
What sounded awesome, for example, in 1940, sounded passe in the 1950's, what sounded awesome in 1956, sounded passe in 1973. Everything has its season; it would nice if the "tree huggers" learned that.
My Ellington collecion, which is on 78's, LP's, and CD's, spans from the very beginning to the very end of Duke's career, and this box set is one of my favorites.
Mr. Ellington never stopped changing and growing, musically. He stayed current: more modern than any of the so-called modernists; modern before the so-called modernists existed. It would be nice if everybody did the same.