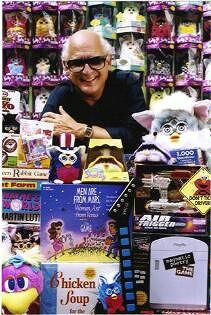 The Complete Idiot's Guide to Cashing In On Your Inventions, 2nd Edition Paperback – June 1, 2010

by Richard C. Levy (Author)
3.8 out of 5 stars 35 ratings
See all formats and editions
Sorry, there was a problem loading this page. Try again.
Patent applications are booming!
Innovative strategies to market inventive products.

The Complete Idiot's Guide(r) to Cashing In On Your Inventions, Second Edition covers every aspect of the inventing process from concept to market- and this new edition offers more in-depth coverage of the development process, prototyping and manufacturing helping readers identify how to go about turning their ideas into something tangible that they can market.

"Richard Levy is a generous guy...shares his secrets here for developing and exploiting (in the best sense of the word) one's creative endeavors. The author's generosity and delight is infectious as he guides the reader through the steps required to protect one's rights while simultaneously seeking financing, recognition, and other support. Beyond his words of wisdom, the sagacious inventor provides an array of forms and other tools so that neophytes needn't reinvent the wheel when they aspire to monetize their inspirations."
-Richard Pachter,
The Miami Herald

"Inventing is easy if your brain is wired that way. Developing inventions into real products also isn't rocket science if you know how. Converting inventions into licenses that'll turn into real products, protecting your work, making the cash register ring... now that's the hard part. No one is better at doing all of these things than Richard Levy whose track record for inventing and licensing successful toys and games is a mile long. What's more, he has an uncanny knack for describing all facets of the whole process in books that really teach. This current one is no exception. Go get it."
-Ralph H. Baer, father of the console video game industry, inventor of SIMON and many other toys and games, the 2010 Inductee in the Inventor's Hall of Fame, and the 2004 Winner of the National Medal of Technology. He is president of R.H. Baer Consultants.

Richard C. Levy in the past 33 years has co-created, co-developed and licensed over 200 items, including one of the most popular toys of all time, Furby. Among his games are blockbusters: "Men Are From Mars, Women Are From Venus", "Chicken Soup for the Soul", and "Adverteasing." His first trading card game is WarStone. In other industries, Richard has the Kuhn-Rikon Frosting Deco Pen and Cool Down Doggie, a misting leash from Hyper Products. He is co-author of The Toy & Game Inventor's Handbook, and is a winner of the SBA Innovation Award and has also been named an M.I.T. Inventor of the Week.

Richard C. Levy, president, Richard C. Levy & Associates, LLC, specializes in the invention, product development, design and licensing of original concepts. In business for more than for 40 years, RCL&A's licensed products include one of the best-known and successful toys of all time, Furby (Hasbro), the interactive, animatronic creature that has sold more than 70 million units globally.

Among his many games are BrainBolt Genius (Educational Insights), Adverteasing (Cadaco), Men are From Mars, Women are From Venus (Mattel) and Chicken Soup for the Soul (Cardinal), the latter two based upon best-selling literary properties.

RCL&A's licensees range from Hasbro and Mattel to General Foods and P&G.

The critically acclaimed "The Complete Idiot's Guide to Cashing In on Your Inventions" (2nd Edition) and "The Toy and Game Inventor's Handbook" (3nd Edition) are Richard's eleventh and twelfth books, respectively.

Richard served two consecutive terms on the board of Intellectual Property Owners. He is listed in Who's Who in Entertainment, has been profiled by Kiplinger's Personal Finance, New York Times, Washington Post, Inventor's Digest, and Discovery Channel's "Invention" series. Richard received the Small Business Administration's Innovation Award.

Richard is married to Sheryl S. Levy, his soulmate and business partner, CFO of RCL&A, and co-inventor of many board games. The couple co-authored "Plane Talk: The Consumer Air Travel Guide". Their daughter, Bettie, is an executive in the music industry. Bettie invented her first board game, Here Comes the Bride, at age 6.

Sarah Whitson
4.0 out of 5 stars My boyfriend says this was a great help!
Reviewed in the United States 🇺🇸 on February 18, 2013
Verified Purchase
I bought this for my boyfriend for Christmas because he is always coming up with great ideas for new products but never does anything about it. He said the book was very informative and had a lot of great reference materials. He still hasn't gone beyond "the idea" with regard to his inventions, but I don't think it has anything to do with the book.
Read more
2 people found this helpful
Helpful
Report abuse

Brittney
1.0 out of 5 stars Bull
Reviewed in the United States 🇺🇸 on February 22, 2014
Verified Purchase
This was a waste of time and money. its filled with nothing but fluff and useless facts. What is useful is buried so deep under all the stupid stuff you fall asleep trying to find it. I personally don't see how this is helpful to anyone. Unless of course you like reading the same information over and over, quotes, and random facts that won't in any way help you achieve your goal. Most useful information was not to use an invention help company which I already knew so thanks for nothing.
Read more
2 people found this helpful
Helpful
Report abuse

Nate S.
4.0 out of 5 stars Four Stars
Reviewed in the United States 🇺🇸 on January 19, 2015
Verified Purchase
Its a book about marketing inventions
Read more
One person found this helpful
Helpful
Report abuse

Patricia Bell
5.0 out of 5 stars Another home run hit from one of the Best.
Reviewed in the United States 🇺🇸 on June 9, 2010
Verified Purchase
What an inspiring book for anyone with an idea. Everyone gets an idea now and then but we need to know how to take it to the next level. Who better to teach than the best. Richard has hit another home run with this
new book. Inspiring for everyone.
Read more
6 people found this helpful
Helpful
Report abuse

Bruce H. Dunson
5.0 out of 5 stars A valuable addition to every inventors library.
Reviewed in the United States 🇺🇸 on June 8, 2010
Verified Purchase
This book is an honest, insightful, incisive look at a tough business. I bought 15 copies for my robotics R&D team at TRACLabs. this book should be read by anyone with an idea and the American dream.