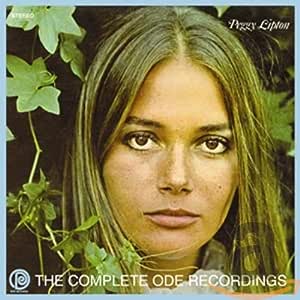 Model-turned-actress Peggy Lipton was (and is) one of the great beauties of her generation, and in her role as flower child Julie Barnes on The Mod Squad, became the It Girl during the show s late- 60s/early- 70s run. The same year (1968) that she premiered on the show, Peggy also unveiled her formidable singing talent on a self-titled album produced by Lou Adler and released on his Ode record label. The album yielded a charting single in Stoney End and led to some other Bubbling Under non-album single releases for Ode including evocative covers of Laura Nyro s Lu and Donovan s Wear Your Love Like Heaven plus a collaboration with writer-producer Jimmy Webb on his song Red Clay County Line all of which we ve collected on Peggy Lipton: The Complete Ode Recordings, which features everything she released on the label plus four unreleased tracks including a version of Brian Wilson s I Just Wasn t Made for These Times and a rendition of Carole King s Now That Everything s Been Said that she performed on The Mod Squad! Our Real Gone reissue of this lost gem (which has only come out on CD in Japan as a straight album reissue without the bonus tracks) replicates the original album s gatefold art with wallet packaging that includes a booklet displaying rare photos and single picture sleeves, with notes by Joe Marchese featuring quotes from Peggy Lipton. An earful and an eye-ful from the multitalented Ms. Lipton!

A. Film LoverTop Contributor: Classical Music
TOP 500 REVIEWER
4.0 out of 5 stars Four stars for Ms. Lipton and the orchestrations, one star for Mr. Adler's inept production
Reviewed in the United States on August 11, 2018
Verified Purchase
Listen, whatever one feels about Peggy Lipton, and I like her a lot, you can't ignore the ineptitude of Mr. Lou Adler - I don't give a fig how many hits he produced or how many legends he produced, his mix here is wretched, almost like he's trying to hide Ms. Lipton's voice. That's desperation and unnecessary as her voice on the majority of the tracks, especially the album (not the bonus) is fine. I feel similarly every time I hear an Arif Mardin album - just scratch my head. Wonderful liner notes and nice bonus tracks, save for the one disaster on this CD, Burt Bacharach and Hal David's Wanting Things - a terrible arrangement and the pitchiest singing I have ever heard on something that was actually released to the public. I blame her not a whit and put the total blame on the producer. I always enjoyed albums like this back in the day - oh, and to the person who says this album had nothing to do with The Mod Squad - yes, it came out two weeks after the series debuted, but sorry it had everything to do with the show, which she'd been filming for several months.
Read more
One person found this helpful
Helpful
Comment Report abuse

Don E. Marchione
3.0 out of 5 stars Soft Pop Done Correctly
Reviewed in the United States on January 8, 2015
Verified Purchase
Peggy Lipton was a very pretty young woman of about age 22, with a background in modeling and little experience in the music industry when she recorded this LP back in 1968. Anyone who followed her career knows that she went on to star on TV's Mod Squad, and years later, Twin Peaks. It is not as widely known that she sang and wrote music. This CD contains 19 tracks, 5 of which were written by Ms. Lipton. The others were written mostly by Laura Nyro, Gerry Goffin & Carole King, Jimmy Webb, Burt Bacharach & Hal David, Donovan, and Barry Mann & Cynthia Weill. So, the material was written primarily by very accomplished songwriters. Frankly, Peggy Lipton's compositions are appealing, despite her lack of recognition as a songwriter.

The CD contains the original album, a few subsequent singles and some unreleased songs. Lou Adler, who founded Dunhill Records and Ode Records and produced, among others, The Mamas & The Papas, produced the songs. So, it was certainly beneficial to be connected to a major player in the music business. Adler assembled some well-known studio musicians for the sessions. It's difficult to go wrong with The Blossoms as back-up singers, and players such as Hal Blaine, Joe Osborn and Larry Knechtel. In addition, the LP was arranged by Marty Paich, one of the bright musical lights in the West Coast jazz scene and a well-known and proven arranger.

The CD consists of pure pop tunes that are very pleasant and lushly arranged, although not particularly engaging compared to the output of other artists of the time such as Jackie DeShannon and Dusty Springfield. In reading the liner notes included with the CD, I noticed that Ms. Lipton was a bit self-deprecating, stating that she sang off key during the LP sessions. Of course, this isn't Kiri Te Kanawa. But then, that's not what I was expecting. Ms. Lipton's voice is pretty, certainly pleasant and appealing, and blended well with the arrangements. It sounds like she did her best and wasn't just phoning in her performances. She does a nice job with Barbra Streisand's hit record, Stoney End. But, If you like this song, I recommend Laura Nyro's version. She wrote the song and provides a more emotional and effective reading than those of Ms. Lipton or Ms. Streisand.

The music on the CD should be welcome to anyone who enjoys late 1960s pop music. It's very pleasant, but the LP was overlooked by the public at the time. The CD remastering sounds fine. Real Gone Music always does a nice job with sound reproduction. Recommended for the target audience: fans of soft pop.

BIGC
5.0 out of 5 stars A treasure from the Pop Past..."into my soul it seeps, this golden surprise".
Reviewed in the United States on August 7, 2014
Verified Purchase
Peggy Lipton recorded this album on the Ode label in 1968, and it has often been dismissed as a tv star cash-in, or vinyl product as pure commodity. This is not only utterly false, it debases the wonderful music you will find here. Lipton and producer Lou Adler created this collection of songs long before the debut of THE MOD SQUAD, which launched Peggy from a relative unknown to a household name. Lipton had genuine musical talent and aspirations, and pop wunderkind Adler believed in her. Vocally, Lipton was not possessed of an especially strong instrument, but what she lacked in experience and power, is more than compensated for by her warm, unaffected delivery. Describing herself as a "tormented hippie pop torch singer", Lipton sings with genuine feeling that is often understated in contrast to fairly full arrangements. That having been said, while not everything comes off as well as might be hoped, what works outweighs the flaws, and the combination makes for charming engagement. Remember that this was recorded long before an artists vocals could be altered, treated and sweetened: what you hear is what you get! Backed by the fabled "Wrecking Crew" and a host of other gifted musicians (including Carole King on piano and The Blossoms on bv's) this is hardly bland, by the numbers stuff. As for the songs: Peggy offers up several Carole King compositions, as well as taking on Laura Nyro. Besides Kings co-writers (Toni Stern, Goffin and Wexler) the other songwriter featured on the lp selections is Lipton herself, and a damned fine one she is, too. The album opens on a high point with her own reflective LET ME PASS BY, and closes with HONEY WON'T LET ME. The later song, again composed solely by Peggy, is an absolute pop masterpiece: sensual, tender and gloriously beautiful. A perfect marriage of her budding talents and Adlers artistic know-how, in full flower. In between she offers the lovely instrumental MEMORIES OF A GOLDEN WEEKEND, which briefly preludes her ambitious SAN FRANCISCO GLIDE. Overall, the album offers a very welcome, feminine perspective. Mildly ironic that the most iconic womanly lyric comes from a male...yet not surprising since that man is Gerry Goffin. A NATURAL WOMAN is another true highlight, and Liptons favorite track among her own recorded work. Other King-ly riches include songs strongly recorded by others: WASN'T IT YOU ( Petula Clark), LADY OF THE LAKE (Strawberry Alarm Clock) and IT MIGHT AS WELL RAIN UNTIL SEPTEMBER (Carole King herself, and her first real solo hit). Liptons takes are not eclipsed by the others, but stand on their own merit. WIY is subtly dramatic, LADY sweet and mythic, RAIN dreamy and jazzy. King and Sterns' WHO NEEDS IT made its debut here, and it is a choice cut. In fact, the only track that doesn't quite make the grade is one of the otherwise excellent bonus tracks: a very loose and unreleased run-through of Bacharach and Davids WANTING THINGS. Nevertheless, it fits in quite well. The aural swag includes lovely covers by Nyro, Mann & Weil, and King and Sterns' NOW THAT EVERYTHING'S BEEN SAID (sounding quite easy having been liberated from it's slightly corny MOD SQUAD episode trappings). Among my favorites are a strong if truncated version of Donovans WEAR YOUR LOVE LIKE HEAVEN with a clever intro, Wilson and Ashers I JUST WASN'T MADE FOR THESE TIMES stripped down and simplified, RED CLAY COUNTY LINE by Jimmy Webb and the final Lipton original, I KNOW WHERE I'M GOING. The PEGGY LIPTON lp and these handful of singles and rarities were Liptons only forays as a recording artist, and that's a shame. I would have loved to have listened to her hone her craft. Her "honey won't let me sleep, I can't close my eyes...into my soul it seeps, this golden surprise". If you long for the times when music was more about the joyful possibilities and experiences, not to forget plaintive late 60's singer/songwriter pop, than this collection is well worth your purchase. REAL GONE MUSIC has done an amazing job with this release, and I thank them. Peace...Love...Peggy Lipton. ;)
Read more
17 people found this helpful
Helpful
Comment Report abuse
See all reviews

johnnyone
4.0 out of 5 stars Not bad not
Reviewed in Canada on November 16, 2014
Verified Purchase
Maybe she should stick to the Mood Squad. Not bad not fantastic
Read more
Report abuse
See all reviews