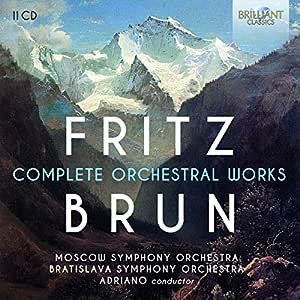 MOSCOW SYMPHONY ORCHESTRA; BRATISLAVA SYMPHONY ORCHESTRA (Artist) Format: Audio CD
4.6 out of 5 stars 12 ratings
See all 2 formats and editions Hide other formats and editions
Includes FREE MP3 version of this album.&nbspProvided by Amazon Digital Services LLC. Terms and Conditions. Does not apply to gift orders.&nbspComplete your purchase to save the MP3 version to your music library.
Available at a lower price from other sellers that may not offer free Prime shipping.

In this release, the prominent conductor Adriano with help from the world renowned Bratislava and Moscow Symphony Orchestras, among others, draws together the first complete series of orchestral works by Swiss composer Fritz Brun. This set sheds light on the little-known composer's repertoire, from the rhapsodies, the concertos, to ten sweeping symphonies. Brun grew up in Lucerne and his time active as a composer coincided with a period of high creative output of Swiss music. Brun's repertoire sits alongside other native composers such as Honegger, Schoeck, and Bloch. The crowded market, combined with the struggle to find a publisher, offers one indication as to why Brun's works failed to reach the mainstream public. While not a household name, Brun is often touted as the Swiss answer to Vaughan Williams and Edward Elgar. Brun's works have a nostalgic touch; they draw on the Romantic and Classical eras in their emotional sincerity and defined forms, but always with a modern flavor. After graduating from the Cologne conservatoire, Brun worked in Berlin, London and Dortmund where he took up various music posts. His music reflects his European travels and unites diverse inspirations from different countries and eras as equals on his musical plane. Modernist influences are skillfully interwoven into his compositions, the scherzo movements for example, draw on Stravinsky in their timbre and rhythms and Symphony No. 5 liberally experiments with tonality. However, similar to his English counterparts, his music remains rooted in his homeland. Symphony No. 3 is inspired by the Alps and it is his best known work, made particularly famous for its use of Italian-Swiss folk melodies. In his later life, Brun returned to Switzerland, where he served as director of the Berne Music Society until his retirement in 1941. The final portion of this release features historical recordings, in particular, the celebrated Paul Sacher brings his interpretation of Variations for string orchestra and piano, and Brun conducts his own Symphony No. 8.