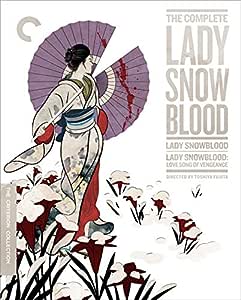 $24.00
& FREE Shipping on eligible orders. Details
Sold by: westcoastmedia
Have one to sell?
Sell on Amazon

A young woman (Meiko Kaji), trained from childhood as an assassin and hell bent on revenge for her father s murder and her mother s rape, hacks and slashes her way to gory satisfaction. Rampant with inventive violence and spectacularly choreographed swordplay, Toshiya Fujita s pair of influential cult classics Lady Snowblood and Lady Snowblood: Love Song of Vengeance, set in late nineteenth and early twentieth century Japan, respectively, are bloody, beautiful extravaganzas composed of one elegant widescreen composition after another. The first Lady Snowblood was a major inspiration for Quentin Tarantino s Kill Bill saga, and both of Fujita s films remain cornerstones of Asian action cinema.

BLU RAY SPECIAL EDITION FEATURES
New 2K digital restorations of both films, with uncompressed monaural soundtracks
New interviews with Kazuo Koike, the writer of the manga on which the films are based, and screenwriter Norio Osada
Trailers
New English subtitle translations
PLUS: An essay by critic Howard Hampton

4.8 out of 5 stars
4.8 out of 5
406 global ratings
How are ratings calculated?
To calculate the overall star rating and percentage breakdown by star, we don’t use a simple average. Instead, our system considers things like how recent a review is and if the reviewer bought the item on Amazon. It also analyzes reviews to verify trustworthiness.
Top reviews

Christopher Barrett
5.0 out of 5 stars Don't go into these films expecting to see a pre Kill-Bill~ they deserve better!
Reviewed in the United States on December 26, 2017
Verified Purchase
So many people compare these films to Kill Bill. They claim Tarantino got his inspiration here. But no matter if he did or did not, these are terrific films on their own. And the idea of bloodthirsty female revenge is not new. Kuroneko is an older Japanese film where the women are possessed by vengeful cat spirits, reborn, and slaughter samurai. Not new.

But these are sumptuously shot, richly colored films from 1973 and 1974, which were in a weird lost decade for Japanese film (there were some good ones... but a LOT of bad ones). These films were based on the manga of a similar name (Japanese translations can vary).

So do not compare these to Kurosawa or Tarantino, enjoy these on their own. They are over the top, bloody revenge flicks. They are amazing for being what they are and not trying to hard to be anything else.

This 2 Blu-Ray collection was a stunning price and has TONS of extras! (digital tons... not real tons... heh). Criterion has produced a lovely set for the fans. Thank you for showing your love Criterion. Now take my money!

Primotenore
3.0 out of 5 stars Interesting Japanese Sword-Play Movie...sort of...
Reviewed in the United States on October 24, 2018
Verified Purchase
I am a huge fan of the Japanese Samurai films. Lady Snowblood doesn't really fit into this category. It is over-the-top slashing and blood-shed. (Quentin Tarantino blatantly plagiarized this film for his Kill Bill movies). The lead character is beautiful, but completely unbelievable as the sword-wielder. She is stiff and clumsy in the scenes where she is "honing her craft". The tale of a daughter's revenge gets old quickly and the secondary characters are uninteresting, as well.
I probably won't be re-visiting this film for a while, if ever.
Not whole-heartedly recommended.

purchasing responder
3.0 out of 5 stars hard to follow, hard to like
Reviewed in the United States on November 4, 2020
Verified Purchase
the story has potential: a young wife is brutally raped and her husband and young son brutally murdered and she takes revenge on one of them. but she is sentenced to life for this murder and she seduces (not blatant pornography, just suggestive) jail guards until she becomes pregnant. she dies in childbirth and has a woman promise to raise her daughter (Yuki) to avenge the crimes and Yuki is raised this way. but the story becomes slow and the action scenes aren't very convincing or action-packed. not easy to describe this one so give it a try if you're willing to purchase something not highly recommendable or watch something else. hard to call this one
Read more
2 people found this helpful
Helpful
Report abuse

aly jenkins
5.0 out of 5 stars Ultimate tale of revenge
Reviewed in the United States on October 9, 2017
Verified Purchase
Beautiful, chilling and great copy of both Lady Snowblood movies. If you are a fan of Quentin Taratino's Kill Bill this one is for you! This was one of the major inspirations for Kill Bill including the use of the song Flower of Carnage that was used near the ending of the first volume, sung by no other then our leading lady. Meiko Kaji is a fantastic actress that stared in many movies during this period, including the famous Lady Scorpion series. She shines though as Lady Snowblood. The first movie is beautiful however the second does not live up to the first in my opinion but is still worth a watch.
Read more
9 people found this helpful
Helpful
Report abuse

Keith R. Sauerwald
5.0 out of 5 stars If you like Japanese movies of this status and calibre, then you will enjoy these two for sure.
Reviewed in the United States on February 20, 2019
Verified Purchase
There is nothing I disliked about these two movies. I have given them a 5 star rating, so that should tell you something. I am not going to delve into details of what they contain, I prefer to leave that for you to discover.Just take my word for it. If you like this type of movie then I am sure you will agree with these comments. Enjoy!
Read more
6 people found this helpful
Helpful
Report abuse

Matcha Do About Everything
5.0 out of 5 stars Meiko
Reviewed in the United States on August 8, 2019
Verified Purchase
Meiko Kaji - the most gorgeous actress in this iconic movie.
Great edition from Criterion.
Must have for Meiko fans!

Scott Lehmann
5.0 out of 5 stars Let it snow, let it snow, let it snow...
Reviewed in the United States on March 19, 2017
Verified Purchase
"Lady Snowblood" is an absolute classic of 1970s Japanese cinema and its shadow looms large over the plot and cinematography of Quentin Tarantino's excellent "Kill Bill", which was clearly inspired by this movie.

This movie (and its sequel, "Love Song of Vengeance", also included in this Criterion release) are essential viewing for fans of Japanese cinema, fans of revenge films and fans of Quentin
Tarantino.

While the special features aren't anything that special, it is still two movies for the price of one, and they've been painstakingly restored to fine detail and brilliant color, per Criterion's usual high standard. I found myself blown away by the first movie and entertained by the sequel. I have no regrets about this purchase.
Read more
9 people found this helpful
Helpful
Report abuse

Jessica Sappington
5.0 out of 5 stars This movie is worth watching ! !!!
Reviewed in the United States on January 1, 2019
Verified Purchase
I found out, after watching ichi that the same writer, wrote lady snow blood and lone wolf and cub movies.. I don't know much about manga cartooons via japan.. but am a huge admirer of both or all series ! cheers !
Read more
3 people found this helpful
Helpful
Report abuse
See all reviews

Amazon Customer
5.0 out of 5 stars Lady Snowblood Review.
Reviewed in the United Kingdom on October 30, 2020
Verified Purchase
Lady Snowblood is brilliant!
Ist film is very good, where as the 2nd is not as good as the first. Brilliant action blood spraying scenes.
First time ever watched it, really enjoyed it !
It's far superior to Quentin Tarantino's Kill Bill.
Read more
Report abuse

Trek Fan..
5.0 out of 5 stars I’m Very Impress With These Movies..Love Them..
Reviewed in Canada on January 28, 2016
Verified Purchase
I totally agree with Rosemary Thyme on this one, but the sad thing is there is not a lot of reviews here,
I was expecting much more than this after all this was the start of the best revenge story I’ve seen in years,
I didn’t even know these movies existed because I saw the Quentin Tarantino “Kill Bill” first, then I was surfing
Amazon and I found these an in reading some of the reviews that stated it was from these movies he got the idea,
to make Kill Bill, but like Rosemary said this is more of a deep emotional revenge than kill bill was,
“Lady Snowblood” an “Lady Snowblood Love Song Of Vengeance”, is set in late nineteenth to early Twentieth-century
Japan, you will know this story from the out set so the spoilers I’m giving you wouldn’t make your viewing any less
surprising, trained from a child to take revenge on the people who has killed her parents, Miko Kaji sets out on her
mission to annihilate each an every one who has done her parents wrong, an it’s done in the most brutal way possible,
but the blood seem to be really good red die, for some reason, or they were using blood thinners at the time,
so you will get a chuckle at that if the killing gross you out,
this Criterion restored picture quality is really really good kudos to that, some of the night scenes are a little dark,
but not as much that you can’t make things out,
Lady Snowblood 97 Min.
Love Song Of Vengeance 87 Min.
Japanese LPCM 1.0 with English subtitles.no Dub.
Widescreen 2.39:1
I’m Very Impress With These Movies..Love Them..
Read more
4 people found this helpful
Report abuse