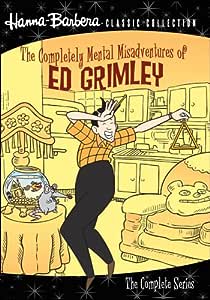 The Completely Mental Misadventures of Ed Grimley: The Complete Series

Martin Short’s immortal creation Ed Grimley, the nicest nerd to ever slick up a top knot, began life during Short’s Second City days and followed him onto Saturday Night Live. As Short’s comedy career took off, so too did the fame of his creation, and Ed eventually “graduated” from late night to early morning. Short provides the voice for Ed, and is joined by a coterie of comedy compatriots including fellow SCTV alums Joe Flaherty, Catherine O’Hara, Andrea Martin, venerated voice vet Frank Welker, and the titanically talented Jonathan Winters. Ed lives with his goldfish - Moby - and a clever rat named Sheldon while sharing screen time with the science-teaching team of the Amazing Gustav Brothers and spooky storytelling time with Count Floyd. This 2-Disc Collection presents all 13 of Ed’s amazing animated antic adventures – Totally Decent! Tuna casserole awaits!

4.7 out of 5 stars
4.7 out of 5
53 customer ratings
How does Amazon calculate star ratings?
Amazon calculates a product’s star ratings based on a machine learned model instead of a raw data average. The model takes into account factors including the age of a rating, whether the ratings are from verified purchasers, and factors that establish reviewer trustworthiness.
Top reviews

Gord Wilson
5.0 out of 5 stars Totally decent. You can't say it's not.
Reviewed in the United States on March 18, 2013
Verified Purchase
I never thought I'd see this on DVD, but thanks to Warner Archive, and whatever serendipitous happenings, here it is. If there's a drawback to the WA DVD-R sets, it's that Amazon doesn't mark them down, but, amazing as it seems, in this case they have (who knows how long that may last?). The top-notch packaging matches the Hanna-Barbera Golden Collection. Inside, you just get the two, one-sided DVD-R discs snapped into the case. No booklet. You have to slip the disc in your DVD or Blu-Ray player to see the contents, and it's sad there are no extras. But there is art on both discs.

The good news is that here are thirteen great episodes of this quirky show. I might have a bone to pick with some of the writers/ storyboarders (although not nearly as much as on shows like Animaniacs. Why do the villains have to be caricatures of Bob Hope and Bing Crosby? Nevertheless, this show, made in conjunction with Colossal Pictures, which did MTV's Liquid Television, was in every way a breath of fresh air when it first hit the airwaves in 1988. Its enormously clever combination of live action (Count Floyd, and occasionally Martin Short in a cameo), and animation are wonderfully handled.

I have to agree with another reviewer that the episode, "Good Neighbor Ed" is a high point. The writing is about ten times better than most of the episodes, even though most of the show's writing is at least OK (not nearly as uneven as many recent cartoon series, in which episodes vary widely depending who wrote or storyboarded them). This show obviously doesn't take itself too seriously, and it doesn't try too hard. It avoids the strident voice and over-acting that have come to plague modern TV. Ed is nothing if not subtle. And likable. And clever. SCTV's talented cast glides seamlessly into animation. No wonder this is a cult classic. It's truly a high point of late '80s animation. How can you say it's not?

C. P. Gilmore
5.0 out of 5 stars A Martin Short Treasure, I Must Say!
Reviewed in the United States on April 15, 2015
Verified Purchase
"Back in the day" when Ed Grimley had his own Saturday morning cartoon show (remember them?) I used to watch it with my young son whenever I had a Saturday morning off. Since I traveled for a living I couldn't be home every Saturday to watch these with him, so he took it upon himself to tape the show on our VCR (remember those?) and we'd watch the recordings together after I got home. Pretty soon, he had all the episodes taped for me on the same tape thanks to reruns, and that's one of the few VHS tapes I cherish to this day. The release of this DVD means I can now see our friend Ed Grimley as much as I like without harming our precious VHS collector tape. It's a very funny show, mixing live and cartoon action in every episode...a veritable Second City reunion at every turn. Martin Short is insane, but not as insane as I am when I enjoy these cartoons at my advanced age (Hey, nobody ever said I had to grow up!). Highly recommended for children of every age.
Read more
3 people found this helpful
Helpful
Comment Report abuse

Carpo Collins
5.0 out of 5 stars Terrific DVD which I never thought they'd actually release
Reviewed in the United States on February 1, 2013
Verified Purchase
This set (probably the most unusual of Hanna-Barbera) has all 13 episodes of Ed Grimley. The animated portions of the episodes are fun for kids, but adults who like (and miss) SCTV may really appreciate the live action segments featuring Count Floyd (Joe Flaherty) and Catherine O' Hara-these portions are a riot. Andrea Martin (also of SCTV) provides various goofy voices reminiscent of Edith Prickley and Edna Boil.

Goofy and earnest-to-a-fault Ed Grimley lives with his goldfish and tries to be of assistance to his neighbors and just about anyone he runs into who needs help. My favorite episode is "Good Neighbor Ed", in which Ed tries getting photos of all his neighbors in the entire neighborhood. His landlord (Jonathan Winters) and his wife (Andrea Martin) bicker hilariously; then there's a live clip where Count Floyd tries to convince us that lounge singer Skippy High (Martin Short) is scary (he has a lisp and bores the children). The humor is goofy, basically SCTV in cartoon form. Martin Short is a riot when he plays multiple characters.

These episodes look (and sound) pretty good on dvd, though they're not in widescreen as they were created for television in the 1980's. There are no extras.
Read more
14 people found this helpful
Helpful
Comment Report abuse

Michael Wideski
4.0 out of 5 stars Don't Expect Too Much, I Must Say...
Reviewed in the United States on March 27, 2014
Verified Purchase
My now mid-30's kids used to HOWL at the live version of EG as portrayed by Martin Short. I've never actually seen the animated version until it arrived from amazon. It does bring back memories, y'know, frenetic, rapid-fire, over-the-top. Kind of nostalgic, I must say.
The inclusion of Count Flloyd, and the voice of Andrea Martin were, I thought, a nice touch. But my two adolescent kids, with a totally different frame of reference, are not impressed, which is sad...
Definitely worth having a few, if you're old enough to remember the 80's. Does that sound Mental?
Read more
3 people found this helpful
Helpful
Comment Report abuse
See all reviews from the United States

Adam Hendershot
5.0 out of 5 stars Thank god this in on DVD.
Reviewed in Canada on September 10, 2019
Verified Purchase
Never thought they would release this on DVD. Thank god they did. This is a must for SCTV fans.
Read more
Helpful
Sending feedback...
Thank you for your feedback.
Sorry, we failed to record your vote. Please try again
Report abuse