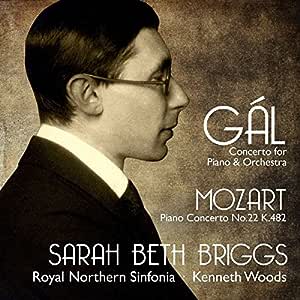 Concerto for Piano and Orchestra

BRIGGS SARAH BETH / RNS / WOODS (Artist) Format: Audio CD
4.5 out of 5 stars 3 ratings
See all 3 formats and editions Hide other formats and editions
Includes FREE MP3 version of this album.&nbspProvided by Amazon Digital Services LLC. Terms and Conditions. Does not apply to gift orders.&nbspComplete your purchase to save the MP3 version to your music library.

Hats off to conductor Kenneth Woods [for] making a case for Gál s elegantly built orchestral pieces ... Here s hoping this is the beginning of a substantial Gál revival. --NPR, All Things Considered

John J. Puccio
5.0 out of 5 stars Both concertos sound radiant
Reviewed in the United States on July 10, 2016
The Austrian-British composer, teacher, and author Hans Gal (1890-1987) might have fallen into obscurity by now if it hadn't been for companies like Avie Records and conductors like Kenneth Woods and Thomas Zehetmair, who have relatively recently begun to champion the neglected composer with a series of new recordings. In the present album, Maestro Woods, pianist Sarah Beth Briggs, and the Royal Northern Sinfonia perform the world premiere recording of Gal's Concerto for Piano and Orchestra, Op. 57, coupled with Mozart's Piano Concerto No. 22 in E-flat, K.482. The results are not only splendid, they fill a much-needed gap in the Gal discography.

Gal wrote his piano concerto in 1948, well into the modern era of classical music. Yet with its lush melodies the score has its feet set firmly in the Romantic period, leading many critics of the time to view Gal as rather old-fashioned. Today's audience may be ready for a return to the more tuneful music of yesteryear, and, thus, we may be hearing more from composers who value entertaining but creative harmonies over experimental dissonance. Who knows? I generalize. What we have in Gal's work is highly accessible and easy to like. That's my main point, no matter what one's opinion of Romantic vs. modern classical music.

Of less question are the talent, discipline, energy, and enthusiasm of the music makers. Ms. Briggs's pianism is both dexterous and impish, capturing the airy, evocative atmosphere of Gay's music as well as its often humorous interludes. The central Adagio is especially wistful and sweet. Moreover, Maestro Woods appears every bit the old hand at Gay's scores, offering a solid, sympathetic accompaniment that complements but never overshadows Ms. Briggs's playing. Together, they make a good case for modern listeners appreciating Gay's ideas more than ever.

Attending the Gal piece we get Mozart's Piano Concerto No. 22, which may seem an odd coupling until you realize that several previous Gal albums also combined his music with that of past masters. Here, the booklet note tries to explain the relationship between Gal's music and Mozart's, but I didn't find the argument entirely convincing. I would have liked hearing Gal's piano concertina, instead.

In any case, Woods's direction in the Mozart is happy, sprightly, and dignified at the same time. When after a lengthy introduction the piano enters, it comes as no surprise that Ms. Briggs matches Woods's ardor, although to a somewhat more-subdued degree. Nevertheless, it's one of the better readings of this work you'll find, filled with subtlety, grace, wit, elegance, and grandeur. Even if I would have preferred a bit more spirited abandon in the delicious closing Allegro, performed a bit low-key, it still sounds radiant.

Simon Fox-Gal, the grandson of Hans Gal, recorded, produced, engineered, and edited the present album, making it in Hall One, Sage Gateshead, England in January 2016. The piano is a little close for my liking, stretching too far from left to right across the stage. Otherwise, the sonics sound balanced, clear, well focused, and mildly resonant. There is also a fine sense of front-to-back depth to the orchestra, which together with a wide dynamic range and strong impact provides a realistic presentation.

Dr Philip E Rand
4.0 out of 5 stars The Cadenzas are the Thing...
Reviewed in the United Kingdom on April 4, 2017
Verified Purchase
The Gal concerto is pleasant. I was surprised by the first couple of notes by the fact that what instantly came to my mind was that the piece reminded me strongly of Kurt Schwertsik's "Nachtmusiken", Op. 104. He and Gal musically share much in common.

For me, the highlight of the disc is the cadenzas in the Mozart. Matthews certainly knew his Mozart and Sarah Beth Briggs playing is very good, she manages to achieve a sharp attack when necessary and not too much legato. An excellent achievement!

However, the ONLY reason I would return to listening to this disc is to experience the cadenza's in the Mozart... they are exceptional little gems.

If you love your Mozart, I recommend that you buy this disc for the cadenzas sake.... yes, I know... only a few minutes of music... but, a few minutes worth the price of the disc... you are not going to find such playing of these cadenzas again... they are treasures.
Read more
2 people found this helpful
Report abuse

Amazon Customer
5.0 out of 5 stars Brilliant performance of a neglected masterpiece.
Reviewed in the United Kingdom on May 14, 2016
Verified Purchase
It's hard to understand why it took nearly 70 years to make the first recording of this wonderful concerto. Sara Beth Briggs plays it superbly, in a fine partnership with the Royal Northern Sinfonia and Kenneth Woods. The accompanying Mozart K482 is also beautifully performed. Recommended with no reservations.
Read more
7 people found this helpful
Report abuse
See all reviews
Pages with related products. See and discover other items: piano concertos