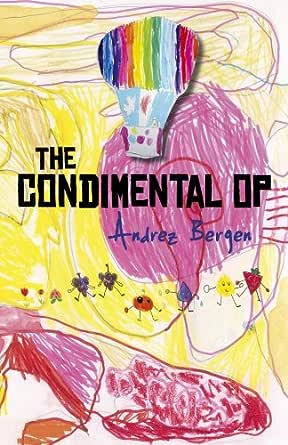 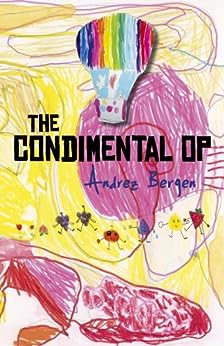 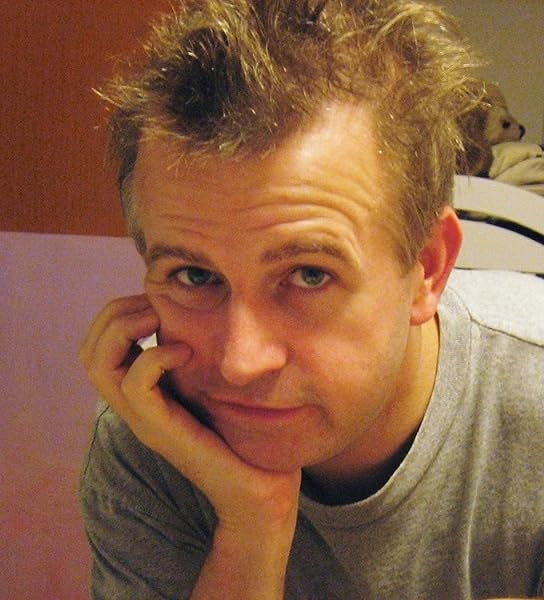 Shawn M. Vogt
5.0 out of 5 stars Wonderful stuff from Andrez Bergen!
Reviewed in the United States on March 10, 2014
I'll start out by saying that The Condimental Op, by Andrez Bergen is simply sprawling in nature. Included within are both fiction and non-fiction; short stories and graphic adaptations, plus alternate and reworked takes on some past fiction. It's got some great art, definitely including the cover, which is displayed above left. It comes to us courtesy of Andrez's daughter Cocoa, which shows that talent runs in the family. I'll be reviewing this in sections, and concentrating on my favorites, due to the large amount of material contained in this collection. So, on to part one.

The first section of the collection mainly contains stand alone short stories. The forewords by Andrez are worth the price of admission alone. That said, I'd recommend reading the stories first, and then coming back to the forewords. That way you get to have a fresh view of the stories. It's up to you, though. 'Sugar and Spice' tells the tale of two teenage delinquents planning a heist... of a comic book store. Needless to say, all does not go as planned. It may just be me, but I find the proceedings darkly humorous. I can't get the thought of the heist from Reservoir Dogs, via the comic shop from The Simpsons out of my head. Ha! I apologize. Very good story. Moving on, 'Victor Victoria' is my favorite from this section. An action-packed tale of aerial combat in WWI, it reminds me of the Biggles series by W.E. Johns. With a certain sly humor throughout, it definitely entertains. Plus, the ending is hilarious. Rounding out my trio of favorite tales, we have 'A Woman of Sense'. A tale of a female mercenary hired by a petty lord to be his bodyguard... at least that's what he says. Things go a bit off track from the jump, and a bit of carnage ensues. Once again, it's the humor that really wins me over. Apparently Andrez had a bit of trouble getting this published, which really boggles my mind. Very nice. While these are my three favorites, all the stories in this section are worth reading, and highly recommended.

The next section contains four stories dealing with the adventures of Roy Scherer and Suzie Miller. Partners in the detective agency of Scherer and Miller, Investigators of the Paranormal and Supermundane, they certainly live up to the agency's title. Through the course of the stories they deal with a zombie (but not really a zombie), a vampire, and a possessed typewriter. The fourth story is a bit longer, and doesn't feature Suzie. It's a prequel, with a much younger and less acerbic Roy, stumbling onto what will be his first case. While a bit hard to pick favorites, if pushed, I'll have to go with 'Lazarus Slept' and 'Revert to Type'. In 'Lazarus' our heroes investigate a possible case of a zombie running amok. Although things aren't quite kosher with the whole zombie identification, Roy's rather blunt approach handles business rather nicely. Things are a bit more complicated with 'Revert to Type'. Called on by a client who claims to have a possessed typewriter, Roy quickly classes the guy as a total nutter. Proved wrong, Roy's usual straight-ahead way of operating blows up in his face. This is really Suzie's moment to shine, and is a total joy. Really great. Half the fun in these tales are watching Roy go about business; the other half is Suzie annoying the hell out of him. Has a whole lot of "laugh out loud" moments throughout the various stories. I'm a big fan of the characters, and hopefully we will see more of them in the future. (Hint, hint Andrez.)

The third section revisits the dystopian world of Tobacco-Stained Mountain Goat. Sci-fi filtered through the darkest noir, I'd highly recommend picking it up. The duo of Floyd Maquina and Laurel Canyon are feautured in the first two stories, 'Come Out Swinging' and 'Dread Fellow Churls'. Both stories revolve around a rescue attempt, although the latter is pulled off a bit more smoothly. 'Neck-Tied' features a fellow Seeker (a combination of detective/tracker, Floyd being one as well) in a rather desperate situation. 'In-Dreamed' is a story of Floyd's supposedly dead wife, Veronica; she is apparently alive, after all. The ending is a nice twist. She also features (In my mind, at least. Andrez leaves it up to the reader.) in my favorite of two graphic adaptations included in this section, 'Waiting For Sod All'. As I really enjoyed TSMG, these continuations and off-shoots are greatly appreciated, including the ones not mentioned. All in all, gritty, dark, and shot through with a touch of gallow's humor. Really, what's not to like?

The final section, fittingly entitled 'Ransacking the Archive', brings together a variety of materiel, most of it non-fiction articles. Starting out with a number of prose selections written in 1989, it moves through critiques of food, film, music, and culture. Setting down an account of the weeks leading up to the birth of his daughter, Cocoa, is the most personal of these entries. This may or may-not be your cup of tea, but I found them fascinating. Very glad they were included, since I believe they give a bit of insight on the events that helped shape the author's works. Plus, I just like reading reviews. Ta, Andrez!

Christopher
5.0 out of 5 stars A peek behind the curtain
Reviewed in the United States on July 7, 2013
If you've ever wanted to peek behind the curtain and get a glimpse of an author's life, THE CONDIMENTAL OP is for you. From the cover (drawn by Bergen's young daughter Cocoa) to short stories spun from scrapped scenes in TOBACCO-STAINED MOUNTAIN GOAT, ONE HUNDRED YEARS OF VICISSITUDE and WHO IS KILLING THE GREAT CAPES OF HEROPA?, and non-fiction articles from his past life as a journalist, Bergen delivers a sort-of DVD Extras/Bonus Content/B-sides collection. And it's genuine fun.

The short stories republished from recent anthologies/e-zines (All Due Respect, Weird Noir, Off the Record 2, Big Pulp, Pulp Ink 2 and more) are great, but Bergen's commentary on editing (the process as well as cutting scenes and tweaking them for the collection) and his non-fiction articles really stuck out for me. I'm a huge fan of Satoshi Kon (R.I.P.) and it was a pleasant surprise to read a review of his film Paprika - made me grab it off the shelf along with Paranoia Agent to throw in the queue for a watch. AND, Bergen got to work with Production I.G. (count me jealous) - recounting his role in assisting the company achieve a natural English translation.

Overall, the book was a refreshing treat and a format I'd like to see other authors pursue.
Read more
3 people found this helpful
Helpful
Report abuse

Guy W. Salvidge
4.0 out of 5 stars Collected shorts from a modern noir wrangler
Reviewed in the United States on July 6, 2013
Andrez Bergen is the insanely productive author of at least three novels, all of which have appeared in the past two years or so. His first, Tobacco-Stained Mountain Goat, introduced us to the world of PI Floyd Manquina and dystopian future Melbourne. With more noir film references than you can point a stick at, the novel somehow managed to make noir dystopia fun. Many of the stories collected in The Condimental Op feature the same characters and situations from the novel and can be read as 'bonus scenes' from the book. It's not all Tobacco-Stained stuff, however; Bergen includes a range of different stories, most fitting somewhere within the crime genre. Each story has its own introduction, which I found interesting from a writing perspective. Some are mere snippets of scenes never fleshed out or re-imagined, while others are fully-fledged stories of their own.

Bergen is a musician as well as a writer; the best analogy for this volume is that of a B-sides collection. Nothing here is as essential as the novels - I can highly recommend the dreamy One Hundred Years of Visscitude as well as Tobacco-Stained Mountain Goat - but if you're curious as to how the novels came about, or if you want to become better acquainted with the mad mind of Andrez Bergen, then The Condimental Op is just your ticket.
Read more
2 people found this helpful
Helpful
Report abuse

David
5.0 out of 5 stars The perfect addition to your Andrez Bergen collection
Reviewed in the United States on July 6, 2013
The Condimental Op (a riff on A Continental Op by Dashiell Hammett), is a collection of short stories, comics, art, and articles, and serves as a kind of DVD Bonus Features for his work, especially Tobacco Stained Mountain Goat.

The cover is art by his (then 6 year old) daughter Cocoa :)

I love this sort of thing. I'm mad for Special Features. Want proof? I bought the blu-ray of Prometheus, a film I hated, just because it had a great collection of special features and I wanted to see if they redeemed the film in any way (they didn't).

My favourite short story is Victor Victoria, a Biggles-ish type romp. Great stuff. Followed closely by Revert to Type, which features Andrez's `Investigators of the Paranormal and Supermundane', Roy & Suzie (who also show up in a couple of other stories).

It also includes some pieces on living in Japan, and if you're interested in Andrez's other career as a musician (as Little Nobody), you'll be happy that he writes about the music industry as well.

Overall The Condimental Op is not as essential as his novels Tobacco-Stained Mountain Goat, One Hundred Years of Vicissitude & Who is killing the Great Capes of Heropa?, but they do make a great package, much like a DVD boxed set, and help round out the Andrez Bergen experience.
Read more
3 people found this helpful
Helpful
Report abuse
See all reviews