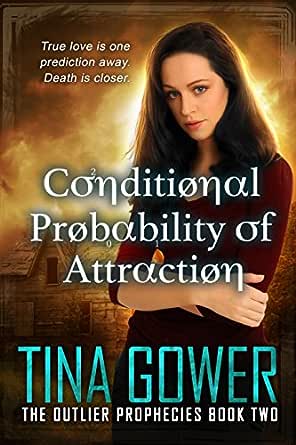 You've subscribed to The Outlier Prophecies! We will preorder your items within 24 hours of when they become available. When new books are released, we'll charge your default payment method for the lowest price available during the pre-order period.
Update your device or payment method, cancel individual pre-orders or your subscription at
Your Memberships & Subscriptions
There was an error. We were unable to process your subscription due to an error. Please refresh and try again. 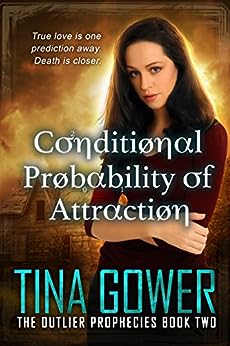 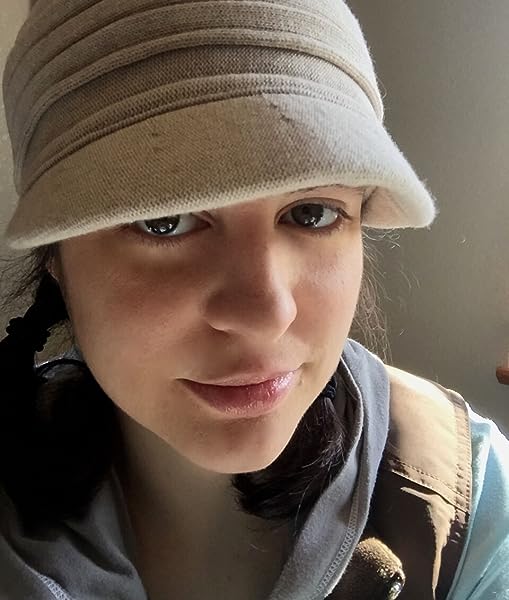 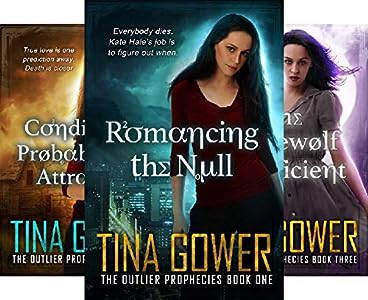 Praise for the Outlier Prophecies Series

"Not often do you come across a series that manages to combine actuaries, werewolves, and Fate. Tina Gower manages it with style, creating an urban fantasy series that's clever, fast-paced, and wonderfully free of clichéd characters. It's a joy to read, and I can't wait to find out what happens next!"  ~J. Kathleen Cheney, author of the Golden City series

"Let's call this whole series my summer guilty pleasure. Maybe it will be yours for the fall season. Guilt and surprised delight were some of the many emotions I migrated through while reading most of The Outlier Prophesies..." ~Hugo nominated Fanzine, Elitist Book Reviews

"Overall, if you can't tell by now I'm just hooked into The Outlier Prophecies and I recommend it to anyone I can." ~Paper Crane Reviews

"...goodness gracious I cannot wait for the next book to see what happens." ~Hines and Bigham's Literary Tryst

"Things are not at all like you would expect in this book. The best thing is, I didn't even expect it to happen! It was all so smooth and written in such a way that I wasn't able to predict that something unexpected would happen." ~ My Book File

"I just have to throw this out there: this is the most effortlessly diverse book I've ever read. That just needs to be added to the long list of this book's good qualities." ~Amazon Reviewer

"Tina Gower is a rare writer, one who can combine gripping realistic details with a magical world in order to create compelling tales with a true sense of wonder. Her stories don't just grind along, they sing." ~David Farland - New York Times Bestselling Author


Praise for Romancing the Null

"As a fan of some of the romantic comedy mystery greats, Janet Evanovich and Jennifer Crusie, I went into Romancing the Null with high expectations and found them surpassed from the very first chapter..." ~Goodreads.com Reviewer

"I read this in two days because I didn't want to put it down. Whether it was the characters, the world building, or the plot itself that kept me reaching for my kindle, I don't know. Honestly, it was probably a mixture of everything." ~Goodreads.com Reviewer

Praise for Conditional Probability of Attraction

"This book is fun and enjoyable and just as good as the first book in the series. It's pure enjoyment, plain and simple." ~Amazon Reviewer

"I read the first book in the Outlier Prophecies Series and really liked it. I *love* the second book." ~Amazon Reviewer

Tina Gower grew up in a small community in Northern California that proudly boasts of having more cows than people. She raised guide dogs for the blind, is dyslexic, and can shoot a gun or bow and miraculously never hit the target (which at some point becomes a statistical improbability). Tina also won the Writers of the Future, the Daphne du Maurier Award for Mystery and Suspense (paranormal category), and was nominated for the Romance Writers of America Golden Heart (writing as Alice Faris). She has professionally published several short stories in a variety of magazines. Tina is represented by Rebecca Strauss at DeFiore and Company. --This text refers to the paperback edition.

kbirdlincoln
4.0 out of 5 stars Kate and Becker's relationship grows stronger
Reviewed in the United States on April 22, 2018
Verified Purchase
4.5 stars, actually.
In this second book of the Outlier Prophecies we get all the stuff I liked from the first book in a somewhat more tightened fashion. ;) Good stuff.

Becker, oh Becker, whyfore art thou like such a mass of shifter tropes and yet compelling as a character anyway? Becker and Kate in this book have to hide their relationship even while it heats us considerably. Becker needs kate to stay calm, and more and more Kate is finding herself needing Becker to just fall asleep. Both of them can't really believe the other one really wants them, of course, so it's left to sidekicks Ali (Kate's baker witch cousin of the muffins) and Hank (Becker's cop partner) to constantly hint both at the depth of the werewolf pack bond as well as the feelz they are having for each other.

Oh yes and there's some new menace after Kate, so Becker has to get growly and over protective, and there's a case for Kate involving a Fate-fueled love match company that has been matching clients with people who are dead or soon to be dead. Some of the actuarial prophecy stuff and the political manuevering the different companies in Kate's case do gets confusing for me (and thus the minus .5 star) but it's still fun.

And yep, there was just enough of some Kate/Becker kissing stuff (convenienty glossed over) at the end to hook me into having to read the next book, too!
Read more
One person found this helpful
Helpful
Report abuse

Zaz
5.0 out of 5 stars A Sweet Urban Romance
Reviewed in the United States on April 8, 2018
Verified Purchase
If you are looking for a mystery with a little romance, this book and series is not for your. I figured out the mystery the moment the villian was introduced, I figured out the series over arching mystery by the end of the first book. It does not work as a procedural either as the characters are always violating procedure. If you are looking for a little hard science mixed in with your fantasy this is not for you. For a series about an actuary- a type of statistician there was very little to no math. I was expecting something on the order of "Numbers" and actuary science is just window dressing. Still I am going to recommend this book and series as long as you are not looking for a mystery or more science. The characters are charming, their growing romance sweet, and their relationship once consummated satisfying. It doesn't crumble the way that other will they won't they stories do.
Read more
Helpful
Report abuse

Tina
4.0 out of 5 stars Conditional Probability of Attraction (2 of series)
Reviewed in the United States on July 4, 2016
Verified Purchase
I really enjoy this series and will definitely be picking up book 3. I'm disappointed in the way the author is stretching out the relationship between Ian and Kate- I'd kind of prefer to see her cut bait and move on, rather than string out the readers, it's frustrating how much time is spent on the advance and retreat dance between these two characters. The base plot is unique and fun, I'm amazed at the twists Gower comes up with for her story line. I'll try one more, in hopes the characters will develop as well as the plot.
Read more
2 people found this helpful
Helpful
Report abuse

Jeanette Sanders
5.0 out of 5 stars Gripping, fast-paced read
Reviewed in the United States on November 4, 2017
Verified Purchase
I loved this second book in Tina Gower's series. The relationship between Kate and Ian is intriguing and gripping. Can't wait to see where it's going. The other characters in the book are fun and quirky, and Tina has a talent for bringing scenes and characters to life. I love her descriptions, the mystery, the paranormal world she's created. The romance suggested in the first book is taking off now. Great blend of fantasy, romance, and mystery. Already ordered the third book and can't wait to start reading it!
Read more
Helpful
Report abuse

Ashley C.
5.0 out of 5 stars Great series
Reviewed in the United States on March 26, 2018
Verified Purchase
Absolutely loved this entire series. The character development is fantastic--Kate and Becker are dynamite! The romantic tension between them is off the charts. Additionally, the atmosphere and world building is phenomenal. This book caught my interest and kept it for the entire series. It is rare for me to get past the second or third book in a series, but I followed this one till the end. Very much worth the read.
Read more
Helpful
Report abuse

chbrown21
4.0 out of 5 stars Quick urban fantasy read
Reviewed in the United States on November 6, 2016
Verified Purchase
Twists and turns throughout this book. Short enough to read in one day but requires attention to the details so you don't get lost. Romance, well in a weird way, and action galore. Plan to read the rest of this series.
Read more
2 people found this helpful
Helpful
Report abuse

Eriegirl218
5.0 out of 5 stars Getting Better
Reviewed in the United States on July 11, 2016
Verified Purchase
I liked the first, but loved the second. This series is getting better. Kate is an actuary in a world where everything can be statistically predicted. She and her police counterpart, Ian Becker, an emotionally damaged werewolf dance around each others' cases and dance around their feelings for each other especially now that Kate is Ian's surrogate pack member. Kate's case involves a dating service.
Read more
Helpful
Report abuse
See all reviews

nadine
4.0 out of 5 stars A really good read with powerful, original characters
Reviewed in Australia on June 1, 2017
Verified Purchase
I found this series really intriguing, both the world and the story are quite original. The lead character is a strong, assertive lady
Read more
Report abuse

Melissa Hughson
5.0 out of 5 stars Five Stars
Reviewed in Canada on November 21, 2016
Verified Purchase
Simply love this series!
Read more
Report abuse
See all reviews
Back to top
Get to Know Us
Make Money with Us
Amazon Payment Products
Let Us Help You
EnglishChoose a language for shopping. United StatesChoose a country/region for shopping.
© 1996-2021, Amazon.com, Inc. or its affiliates