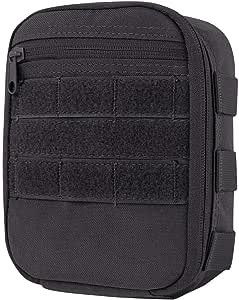 Visit the Condor Store
4.7 out of 5 stars 422 ratings
| 21 answered questions
Available at a lower price from other sellers that may not offer free Prime shipping.

The Condor Sidekick pouch is a low profile, versatile, utility pouch for
all your tools, such as allen wrench, mini flashlight, pocket knife, pen,
and other accessories. The para-cord creates a 90 degree angle and makes it
work station. Specifications: Fully opens with paracords to adjust One
internal pocket Multiple elastic holders One external pocket with zipper
closure Webbing over entire pouch for more attachments 3"H x 5"W ID/ Patch
panel

4.7 out of 5 stars
4.7 out of 5
422 global ratings
How are ratings calculated?
To calculate the overall star rating and percentage breakdown by star, we don’t use a simple average. Instead, our system considers things like how recent a review is and if the reviewer bought the item on Amazon. It also analyzes reviews to verify trustworthiness.

J. Daniels
1.0 out of 5 stars Do not purchase if it's coming from "Direct Premium Buys", it'll be a poor knockoff.
Reviewed in the United States on November 5, 2014
Color: BlackVerified Purchase
I love Condor products. I ordered a Condor Sidekick Pouch in black, as I've owned the same pouch in Olive Drab. What I ordered, and what I received are wholly unrelated. I received a very poor knockoff version of the Condor Sidekick, made by a company called "Explorer" even with a knock-off red hand of Saruman on the label as opposed to white. If your order is coming from Direct Premium Buys, I highly recommend you buy elsewhere. It doesn't even share many of the features of the sidekick.
Read more
106 people found this helpful
Helpful
Comment Report abuse

Bruce Gilliland
5.0 out of 5 stars Sidekick Makes a Good Mini Tool Pouch
Reviewed in the United States on June 23, 2019
Color: BlackVerified Purchase
I bought the Sidekick pouch to use as an EDC pouch, and it worked for that. But I later switched to another pouch for my EDC. Then I saw where a mini tool kit was built using a small pouch. Since I already had the Sidekick, I decided to try it, using the other kit as a guide for the tools. I had a few small tools, but I had to buy some others. My existing tools were too big in most cases.

The original kit had a pair of wire strippers. I couldn’t find one small enough, so I substituted the needle nose pliers. I need to add a couple of large sewing needles that could be used with the Commando handles. The drill bits are really useful only on soft materials or for starting a hole for screws. One missing item is a hammer. Any useful hammer would be too big for this kit. But since this kit would go in my vehicle, I have space for a small hammer in the storage compartment.

The pouch is 5.5 x 7 x 3” (when loaded). I have no trouble zipping the pouch closed. Fully loaded, the kit weighs 2.9 pounds. The MOLLE straps on the front and sides allow for other small items to be attached if needed.

This kit is for small or emergency jobs on the road. But it could be used for small jobs around the house.

Overall, this is a good pouch for what I needed. I have several other Condor pouches. I believe them to be quality products.
Read more

Robin L.S.
3.0 out of 5 stars a bit cumbersome and constricting for what I needed
Reviewed in the United States on October 20, 2018
Color: OliveVerified Purchase
I got it for my photography gear belt to hold batteries, sd cards, etc. I found the zipper to be very tight/rough to operate, not smooth like it was a high quality one, but a bit awkward and requiring two hands for stabilization while opening/closing, which is very inconvenient. I don't actually think it's cheaply made, it seems good quality, it's just "sticky" or rough to use.

Also when the bag is open, the bungee that holds it together is restricting and gets in the way, regardless of how loose you set it, and I have small hands but it seems cumbersome to get things in and out of, and adds some constriction to how you can use it and what you can easily get in and out of it.

I think it's a good product but not easy for one-handed, quick use, like I needed it for. I would have expected it to be more "usable" for smooth, fast, in-field type change-ups, but I guess it's more for the sturdy holding/organizing of a small supply kit.
Read more
2 people found this helpful
Helpful
Comment Report abuse

Jeremy c
4.0 out of 5 stars does the job
Reviewed in the United States on September 12, 2015
Color: BlackVerified Purchase
Not perfect, but good. Molle straps not sewn in like my other condor pouches. Weaving these straps in is a lesson in aggravation. I think I may try a "plastic stick" style securing method with this pouch. The zipper hangs up a bit, but not a deal breaker either. It's a bit smaller than I envisioned. I read dimensions and stared at a tape measure, so I thought I had a good idea. On the size note, it's smaller in every dimension compared to the condor emt pouch, about half as deep which is what really cramps it up. Not large enough for my ifak, not really laid out well for that purpose (i didn't buy it for that purpose, just an fyi). I'm using it as my emergency module, putting my compass, whistle, multi tool, fire starters and assorted stuff in it and it's a tight fit. I could have done without the velcro, but whatever. Hindsight tells me I should have tried a different pouch for my application, but it will do the job just fine. Fits on the side of my mil tec assault pack just fine.
Read more

Vanessa Kirby
5.0 out of 5 stars Great little pouch
Reviewed in the United States on May 7, 2015
Color: OliveVerified Purchase
At first I was skeptical of the inner cord which can be adjusted to hold the bottom flap from opening all the way; you have to tuck it in to keep it out of the way of the zipper while zipping it up - a minor hassle. I briefly considered removing it, but the more I've used it, the more useful it seems.
Lots of elastic bands inside, good for holding bundles of various-sized adhesive bandages or whatnot.
The MOLLE attachment straps on the back seem a little long; makes it hang sort of floppy, instead of really tight. I might replace them.
Great size and design for a basic first aid kit. Slap a Velcro Medic Square on the front and you're in business!
(medic patch sold separately)
Read more

The Green
4.0 out of 5 stars Good
Reviewed in the United Kingdom on November 1, 2014
Color: OliveVerified Purchase
Well made. Lots of options for storeage as well. Main issue is that I never measured, it's a bit on the small side.
Read more
Report abuse

Mohammed A.
5.0 out of 5 stars Five Stars
Reviewed in the United Kingdom on February 27, 2016
Color: BlackVerified Purchase
Just what I was looking for excellent product that is a very neat organiser.
Read more
Report abuse
See all reviews