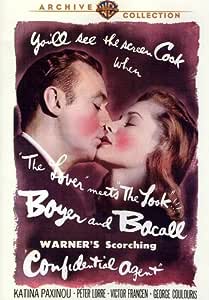 In pre-World War II London, Spanish agent Denard struggles to close a high-level business deal that will strike a blow against fascists in his native country. But industrialists not yet alert to the threat of fascism reject him. A teenage ally caught up in his efforts is murdered. And the mission itself seems a failure. Yet neither the story nor Denard will stop there. Charles Boyer plays Denard and Lauren Bacall is a jaded industrial heiress who assists him in this intricate spy drama. For her second screen appearance, Bacall took a critical thumping, yet her presence smolders. The film itself still satisfies, thanks in no small measure to James Wong Howe's atmospheric cinematography and the story craft of source novelist Graham Greene.

Donald Roland
4.0 out of 5 stars Not what I expected.
Reviewed in the United States on February 27, 2014
Verified Purchase
I will admit that I got this film not for the stars but for the smaller role played by the British actor John Warburton, who plays Bacall's fiancé in the film. Not that I am dissing Charles Boyer, who I like, or Lauren Bacall, who I think is the greatest not physically beautiful actress ever. Warburton doesn't show up until about 70 minutes into the film, but there are a few things that he does do in the film to speed it along, which is a relief in this film as it was considered over long even by the studio's standards. I'd also like the reference the Greek actress Katina Paxinou as the villainous mother/landlord, so much is poured into this character that you can't help but love that last scene with Boyer! Bacall is remarkably natural in only her second film role, no camera shyness here, she was already a trooper. Her role as a wealthy female drunkard, (generally seen as the MALE role) is excellently captured. It has everything done in that coy Warner Brother's way, not quite the lux of MGM but tasteful.
Read more
3 people found this helpful
Helpful
Comment Report abuse

matilda . azzara
4.0 out of 5 stars Interesting Story
Reviewed in the United States on May 17, 2020
Verified Purchase
I thought they were alll good...but the best for me was the young girl...her performance was excellent...Wanda Henrix...she broke my heart.
Read more
Helpful
Comment Report abuse

E. Coughlin
4.0 out of 5 stars Early Bacall without Bogie
Reviewed in the United States on January 27, 2012
Verified Purchase
The movie was fun for me to watch as I'm a big Bacall fan and I'd never seen it. I give it 4 stars to applaud Warner Brothers for continuing to release classic movies on DVD. The movie itself is OK, not great. Bacall is good, but was miscast as an alcoholic socialite. Boyer is unconvincing as a Spaniard as he is about as French as it gets. The goofiest part about this movie is Boyer's character asking poor English coal miners to turn down a job to support the Spanish loyalist cause. Not something an English working man in the early 1940's would care about and it comes off poorly.
Read more
5 people found this helpful
Helpful
Comment Report abuse

Evelina F.
5.0 out of 5 stars Five Stars
Reviewed in the United States on January 13, 2017
Verified Purchase
I love any Charles Boyer film. And this one is just as great
Read more
Helpful
Comment Report abuse

TB
4.0 out of 5 stars Four Stars
Reviewed in the United States on February 16, 2016
Verified Purchase
Did not know existed...was worth tracking down
Read more
Helpful
Comment Report abuse

Coral Newton
3.0 out of 5 stars Lauren Bacall - Oh Dear!
Reviewed in the United Kingdom on November 21, 2011
Verified Purchase
This film is just OK. Charles Boyer gives his usual strong performance but he is battling to keep things going with Lauren Bacall as his leading lady. She is woeful as the daughter of an English Lord. With that accent!! There isn`t even a line of dialogue to explain it. The supporting cast is particularly strong which makes Bacall`s lack of skill even more noticeable. She has been honest enough to say that she didn`t do well but was rushed into the film following her earlier success co-starring with Humphrey Bogart.

The story is a bit messy and the film itelf is mainly photographed with very low light. This means a fair bit of peering for the audience as it tries to work out what is happening. It isn`t a terrible film but it isn`t very good either. It is the only film of Charles Boyer`s that I haven`t enjoyed.