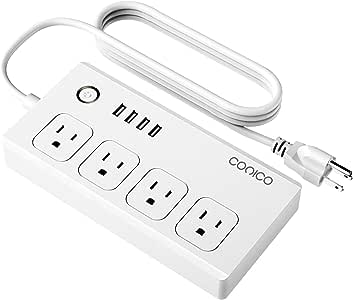 Visit the Conico Store
3.8 out of 5 stars 275 ratings
Currently unavailable.
We don't know when or if this item will be back in stock.

3.8 out of 5 stars
3.8 out of 5
275 global ratings
How are ratings calculated?
To calculate the overall star rating and percentage breakdown by star, we don’t use a simple average. Instead, our system considers things like how recent a review is and if the reviewer bought the item on Amazon. It also analyzes reviews to verify trustworthiness.

Arjay RN
5.0 out of 5 stars Lots of possibilities.
Reviewed in the United States on July 24, 2018
Verified Purchase
This review is for the Conico WiFi Smart power strip Protector with USB ports.
1st impression is that it appears to be made of good quality materials, the plug is the 3prong grounded. The cord is thick and has stiffness into it that rivals quality name brands assuming stiffness is due to thickness of actual wires inside. The plastic sounds hollow but would not break unless great force is applied. Outlets are well built, I had no difficulty using it and inserted cords are sturdy and not loose. Instructions are in English and easy to understand.
The app is straightforward. Download them via QR code provided or your app provider and open them. The only issue I got was setting it up. The app has the ability to automatically scan for devices but was not working since it will only work for Bluetooth enabled devices. It took me 5 minutes to realize that I have to manually add them via Wi-Fi. Instructions are easy. The app tells you step by step how to do it.
Once it is set up, you can tap on your phone to turn them on or off. Make rules and conditions for them to turn on or off (sunrise, sunset, certain times) and you can pretty much try a lot of possibilities.
Pros
• The sockets are well spaced and I don’t think you will have issues with large plugs.
• It has an indicator that tells you if it is on or off.
• You can control them even when you are away from home. The device must always be connected to wifi.
• You don’t need the app to use it. You can use the switch on the device to turn them all on or off. (You cannot control them individually this way.)
• You have 4 outlets that you can customize in any way.
Cons
• USB ports are only controlled as one so you can’t individually program them.
• USB ports only dish out 1A 5V during testing. It does not have QC or so 2.4A.
• Does not have energy monitoring capabilities
• Not for outdoors where it can be used for holiday decorations.

This will only turn power on or off. Most appliances or electronic devices do not turn on when power is given. My Toaster would not toast unless power is applied and bread is put in. My coffee maker will not automatically make coffee just because power is turned on. I still need to press the brew button. My rice cooker has to be on then I need to press cook before it will cook. It is hard to find appliances that are analog that will start to do its job just by applying power. I’m sure there are other applications for this just not for everyone. Lucky for me I am using it on my turtle’s basking light and filters. Works best for lighting the house.
OverallI find this product easy to use. Instructions are easy to understand. I do not have so I cannot test those capabilities.

Heather
3.0 out of 5 stars Works But Proceed With Caution
Reviewed in the United States on January 6, 2018
Verified Purchase
This unit works as advertised. It was fairly simple to set up and operate using the app, and works fine with Alexa. However, pay close attention to the stated specifications. The device is NOT UL Listed. The USB ports offer 2.4A combined total, while the outlets can handle up to 10A total (not each). I am hesitant to push it anywhere near those limits. I plugged in four monitor speakers, each of which can go up to 80 Watts. This is well within the stated limits of the device, but it did produce some heat. While the plastic seems solid, it's not as robust as it could be. When the outlets turn on or off, a distinctly audible "click" can be heard, which indicates electromechanical relays rather than solid-state. These types of relays are cheaper but have several disadvantages. They're slower, less reliable, require more power, and are more prone to wearing out over time. I was surprised to discover this relatively old technology in such a modern device.

The app does not monitor the power consumption of attached devices, as most of the single smart plugs do. I miss that feature.

With the current field of offerings for this type of product, I'm not sure if any of the competitors would be better. I picked this one because it had favorable reviews and looked as good as any of the others. They all appear to be made in China or some other far-east country. Most products from those areas are fine, but some can be hazardous. You take your chances.

I'm giving the product three stars for now, based upon its performance. But I have some serious reservations, so I'll be monitoring it closely over the coming weeks. If it proves to be safe and reliable over a period of time, I may give it another star. If they were to get it UL Listed, that would go a long way towards inspiring greater confidence in the product.
Read more
40 people found this helpful
Helpful
Comment Report abuse

Long Tran
4.0 out of 5 stars Good addition to your smart home
Reviewed in the United States on July 17, 2018
Verified Purchase
Pros: Setup was very simple and it did not take very long at all to connect to my WiFi and then my Google Home Mini. With a quick command of “Hey Google, turn on smart power strip (or whatever you want to name it)” you hear a click and the power strip turns all the ports and outlets on.
The instructions provided a QR code that I could scan that led me directly to the app download. In the app, it allowed me to individually control each outlet, from anywhere with an internet connection.
Cons: The power strip only connects to 2.4G WiFi connections so I had to switch from my 5G band to set it up. Another thing I would have liked is individual outlet control through my Google Home. As far as I know, you can only do that through the app.
Conclusion: I recommend this product for those who want to expand their smart home and have control over their electronic devices, but I don’t recommend it if you want to control certain devices individually using your voice.
Read more
10 people found this helpful
Helpful
Comment Report abuse

Stephanie D.
1.0 out of 5 stars Big. Fat. Nope. Wants too many permissions.
Reviewed in the United States on December 15, 2017
Verified Purchase
I installed the app and connected this device but something feels really fishy about it. I am going with my gut and returning. It would not let me connect without access to my phone for phonecalls, camera, contacts, location and storage. The app just wouldn't do anything until I granted them. Please explain why an outlet needs access to my camera? I want this device out of my house immediately. I never should have downloaded the accompanying app. I think I will stick with another brand. My smart light bulb app does not ask for all these invasive permissions and runs just fine.
Read more
46 people found this helpful
Helpful
Comment Report abuse
See all reviews