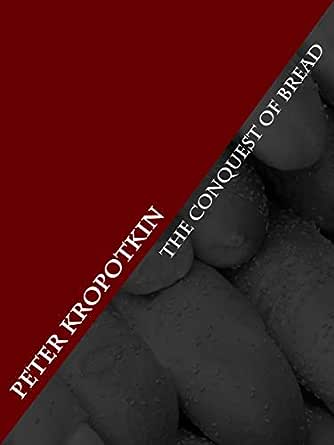 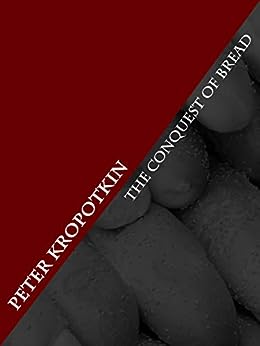 The Conquest of Bread Kindle Edition

Pyotr Alexeyevich Kropotkin (9 December 1842[a] - 8 February 1921) was a Russian activist, writer, revolutionary, scientist, economist, sociologist, historian, essayist, researcher, political scientist, biologist, geographer[11] and philosopher who advocated anarcho-communism. Born into an aristocratic land-owning family, he attended a military school and later served as an officer in Siberia, where he participated in several geological expeditions. He was imprisoned for his activism in 1874 and managed to escape two years later. He spent the next 41 years in exile in Switzerland, France (where he was imprisoned for almost four years) and in England. While in exile, Kropotkin gave lectures and published widely on anarchism and geography.[12] He returned to Russia after the Russian Revolution in 1917 but was disappointed by the Bolshevik state. Kropotkin was a proponent of a decentralised communist society free from central government and based on voluntary associations of self-governing communities and worker-run enterprises. He wrote many books, pamphlets, and articles, the most prominent being The Conquest of Bread and Fields, Factories and Workshops; and his principal scientific offering, Mutual Aid: A Factor of Evolution. He also contributed the article on anarchism to the Encyclopædia Britannica Eleventh Edition[13] and left unfinished a work on anarchist ethical philosophy. Pyotr Kropotkin was born in Moscow, into an ancient Russian princely family. His father, major general Prince Alexei Petrovich Kropotkin, was a descendant of the Smolensk branch,[14] of the Rurik dynasty which had ruled Russia before the rise of the Romanovs. Kropotkin's father owned large tracts of land and nearly 1,200 male serfs in three provinces.[15] His mother was the daughter of a Cossack general.[15] "Under the influence of republican teachings", Kropotkin dropped his princely title at age 12, and "even rebuked his friends, when they so referred to him."[16] In 1857, at age 14, Kropotkin enrolled in the Corps of Pages at St. Petersburg.[17] Only 150 boys - mostly children of nobility belonging to the court - were educated in this privileged corps, which combined the character of a military school endowed with exclusive rights and of a court institution attached to the Imperial Household. Kropotkin's memoirs detail the hazing and other abuse of pages for which the Corps had become notorious. --This text refers to an alternate kindle_edition edition.

Yehudit
5.0 out of 5 stars Communism from a different perspective
Reviewed in the United States on November 5, 2017
Verified Purchase
Evolution based on mutual aid, instead of competition. We don’t teach that much, but this is the perspective given here. Kropotkin illustrates his ideal “communist” society as one of man helping man, for everyone’s benefit. It’s quite lovely. Read it.
Read more
16 people found this helpful
Helpful
Comment Report abuse

Jean-Luc Hayes
4.0 out of 5 stars Great Book - Very informative and whets your appetite for more while being very descriptive itself.
Reviewed in the United States on July 18, 2017
Verified Purchase
First ever book I've read on he subject of Communism, and I've gotta say, while it is not long, it is pretty well qualified in explaining Anarchism and such. I like that it explains the monopoly of the state in citizen's lives, and how humans can work cooperatively together. People have recommenced this book many times to read, and I'm pretty sure it's recommend as a first read as well. I can see why. While some people who don't believe in the goodness of humanity can see some of this as dreaming, and some of it, i see as only dreams as well - real life examples abound in the book and actually make you thing about how humans can, and have lived in a society, albeit not exactly though anarchist communism, but capitalism with elements of communism thrown in. This book does for me what I hoped it to do, provide me with a backboard to spring of of into more dense texts on the topics of each chapter. For instance, I want to learn more about the relationship of the state to capitalism and subjugation, and I'm sure I will find a book detailing that. I also want to learn more about real life anarchist communes that sprung up and how they dissipated. The most interesting thing about this book is that it was written at a time where We, as a modern person, might think is backward - as in now technology and other ideals, however, its amazing that the idea of sending your boots and bottles up" to be cleaned, and then sent down to you was detailed. Its amazing that Kropotkin saw the current technology as capable of providing for humanity without waste, whereas, now, we are looking to the horizon of when Robots will do everything for us. Overall, great book. A little hard to read because of the way some things are worded, but it's not as ancient as Shakespeare. Also, It make include the use of the N-word and possibly Asian Racial slurs.
Read more
3 people found this helpful
Helpful
Comment Report abuse

Joel
5.0 out of 5 stars Just do it
Reviewed in the United States on March 13, 2019
Verified Purchase
Good read!
Read more
One person found this helpful
Helpful
Comment Report abuse

Carlyle
5.0 out of 5 stars Book changed my life
Reviewed in the United States on September 25, 2017
Verified Purchase
This book entirely changed my world view and now I am an entirely different person politically than I was before.
Read more
One person found this helpful
Helpful
Comment Report abuse

Sam Wich
5.0 out of 5 stars That's a sandwich! 👏👏👏👏
Reviewed in the United States on December 22, 2018
Verified Purchase
My name is Sam and my favorite sandwich is a bahn mi!
Read more
One person found this helpful
Helpful
Comment Report abuse

Trey Spencer
5.0 out of 5 stars Five Stars
Reviewed in the United States on June 12, 2017
Verified Purchase
a must read for everyone
Read more
Helpful
Comment Report abuse

Owiseone
5.0 out of 5 stars On time arrival
Reviewed in Canada on December 27, 2019
Verified Purchase
As expected.
Read more
Helpful
Sending feedback...
Thank you for your feedback.
Sorry, we failed to record your vote. Please try again
Report abuse