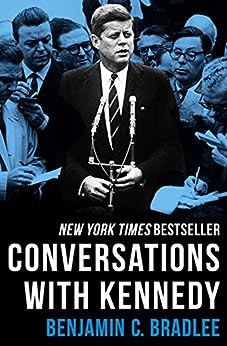 “[Gives] us a good idea of what Jack Kennedy was really like—probably as good an idea as anything likely to be written about [him]. . . . Highly informal and readable.” —Saturday Review
“Crowded with intimate glimpses of Kennedy the man, at work and en famille.” —Newsweek
“Choice insights into Kennedy’s view of Aristotle Onassis, his feeling for his family, especially his father, and his love of practical jokes.” —Chicago Sun-Times
“This is rich biographical fare. . . . The JFK who emerges in these recollections, written from notes kept with the subject’s knowledge, is a more appealing, human person, with his many faults and contradictions, than the jut-jawed upstage performer we saw on film and on magazine covers.” —St. Louis Globe-Democrat
“Witty, blunt, loving, profane and, above all human.” —Boston Herald American
“Rife with gossip, innuendo and rich Inside Stuff.” —New York Post

Benjamin Bradlee is vice-president at large of the Washington Post. Born in Boston, Bradlee attended Harvard College. In 1942, he became a communications officer for the Office of Naval Intelligence and fought in thirteen battles during World War II. Following the war, Bradlee became a reporter for the Washington Post. Working as a journalist in Washington, DC, Bradlee formed a close friendship with Senator John F. Kennedy. He toured with both Kennedy and Nixon during their respective presidential campaigns in 1960. Bradlee became executive editor of the Washington Post in 1968, a position he held until 1991. During this time, Bradlee oversaw the Post’s award-winning coverage of the Watergate affair and the publication of the Pentagon Papers. In 2013, Bradlee was awarded the Presidential Medal of Freedom. Bradlee and his wife, journalist Sally Quinn, live in Washington, DC.

4.2 out of 5 stars
4.2 out of 5
120 global ratings
How are ratings calculated?
To calculate the overall star rating and percentage breakdown by star, we don’t use a simple average. Instead, our system considers things like how recent a review is and if the reviewer bought the item on Amazon. It also analyzes reviews to verify trustworthiness.
Top reviews

Ricardo Mio
5.0 out of 5 stars Delightful and Insightful
Reviewed in the United States on August 3, 2018
Verified Purchase
Having watched "The Post" which is about Ben Bradlee's involvement with publishing "The Pentagon Papers" I ordered this book. I was aware of the book in college, which was published around the time "All the President's Men" was being shown in theaters across the country, but I didn't feel particularly impelled to buy and read it. Until now.

A number of the their conversations were initiated by JFK who would call Bradlee at his home merely to chat. Kennedy was something of a gossip, and, it would appear, starved for company. He liked to talk about politics and about people--especially famous people--and about almost anything else that happened to be on his mind. But rarely about government policy.

A typical entry: March 31, 1962 / The president called about 4:30 this afternoon, again with nothing obviously on his mind, but with thirty minutes of conversation.

Another entry dated September 24, 1963 / reads: Except for his love of the sea, John Fitzgerald Kennedy was about the most urban--and urbane--man I have ever met. A well-manicured golf course, perhaps, or an immaculate lawn have turned into a touch football field, but that is as far as he could comfortably remove himself from the urban amenities without wondering what the hell he was doing, and worrying that he might make a fool of himself.

The relationship began while the two were neighbors in Georgetown. This was in 1958 when JFK was the Senator from Massachusetts, and Bradlee was an editor with Newsweek magazine. Even after Kennedy announced his candidacy for president, Bradlee never dreamed his neighbor would actually win his party's nomination, win the election, and become president. The two hit it off almost immediately, and began a five year friendship that ended in November 1963 with the president's assassination. Bradlee and his wife Tony would also spend weekends with the Kennedys at Camp David, and in Newport, and Palm Beach. This often meant traveling with the president on Air Force One. Bradlee didn't begin making notes of their conversations until later, and always with JFK's permission. The agreement was that Bradlee wouldn't publish until five years after Kennedy left the White House. As it turned out some 10 years elapsed before Bradlee went over his notes and began writing a book. He describes JFK as "graceful, gay, funny, witty, teasing and teasable, forgiving, hungry, incapable of being corny, restless, interesting, interested, exuberant, blunt, profane, and loving. He was all of those . . . and more."

Their relationship was purely personal. Bradlee admits: "I naively saw no conflict of interest between friendship and journalism" although he did use JFK as a source on occasion. All the while, Kennedy was escalating the action in Vietnam. About all he said on the subject was: "The trouble is, we are violating the Geneva agreement. Not as much as the North Vietnamese are, but we're violating it. Whatever we have to do, we have to do in some kind of secrecy, and there's a lot of danger in that."

On page 95, he writes: "For some reason it bugs Kennedy that I speak French. Kennedy finds it intolerable that he doesn't have the facility for language that others have, and his pride in Jackie's linguistic talents is tinged with jealousy and bewilderment. His French can only be described as unusual. One French friend says he speaks it 'with a bad Cuban accent,' while another says, 'He apparently doesn't believe in French verbs, much less pronounce them correctly.'"

November 10, 1963, was the last time Bradlee saw JFK. It was at "Wexford" the new weekend house of the Kennedys, located outside the Capital, in Middleburg, Virginia. The occasion was typically sociable, with dinner and drinks and conversation. Ominously, talk turned to JFK's trip to Dallas to mend political fences.

The next entry, dated November 23, 1963, reads, "The sledgehammer news that President Kennedy had been shot came to me while I was browsing through a Brentano's book store on my lunch hour. . . . I wanted desperately to write something, but I was trembling inside and out, and I didn't know if I could write, much less what I would write. It had to be a tribute, not an ordinary, for I realized in a flash that I knew so little of the building blocks that biography demands, only the cement that binds those blocks. It had to be personal, for I also understood that personal insights into this man were all that I could offer that a hundred others couldn't do better."

And what he eventually did write was this book, which I heartily recommend.

Gisela Hausmann
5.0 out of 5 stars Precious!!!
Reviewed in the United States on June 15, 2017
Verified Purchase
What a beautiful book! In times like these when we wonder about the president's relationship with the press it is wonderful to know that this concept used to work.

Ben Bradlee wrote a beautiful, intimate portrait of Kennedy, retelling his special relationship. If I wanted to quote lines (moments) that moved me I'd have to write a book because there are so many. In a way I am glad that Bradlee did not get to see how our current president insults many respected members of the press, people a president could be friends with.
The retelling how this friendship between two great men evolved is amazingly precious, my son would say "insanely" precious.

Times are changing. Today, people text more than they talk with each other. Bradlee's account how he and Kennedy pondered thoughts and concepts, shared private moments, and helped each other to grow is so beautiful that I will read this book again and again.

Towards the end of the book I grew anxious. What would Bradlee's last memory be?
"... I never heard Kennedy laugh harder than he did that night....
.... We left in the middle of the next day, after another relaxed morning watching Jackie ride and jump, walking, and reading the papers. It was the last time I ever saw him..."
It was comforting to me that Bradlee last memory of Kennedy included the late president laughing.

The book also shows the newsman Bradlee:
"... NOVEMBER 23, 1963 / The sledgehammer news that President Kennedy had been shot came to me while I was browsing through Brentano’s book store on my lunch hour..."

Sledgehammer news! - What a perfect description! Sledgehammers break and destroy stuff to a point beyond repair. It's a perfect word to describe the tragedy.

If I would have to use one word to describe this book I'd call it 'precious."
Deeply moved,
Gisela Hausmann, author and blogger
Read more
5 people found this helpful
Helpful
Report abuse

JAH
4.0 out of 5 stars The ring of truth without sensationalism ...
Reviewed in the United States on January 6, 2020
Verified Purchase
A most unusual recollection of a personal relationship with President Kennedy and Jackie. Bradlee managed to divorce his professional opinions from the true friendship he and his wife had with this powerful couple. A feat I daresay was difficult. It is at times a confluence of many emotions: funny, interesting, frustrating and finally poignant. Not sure why I give it only four stars. It was for me an incredibly personal book.
Read more
One person found this helpful
Helpful
Report abuse

Momazing
5.0 out of 5 stars A well written, easy to read memoir of the relationship between newspaperman Ben Bradlee and POTUS JFK
Reviewed in the United States on November 11, 2014
Verified Purchase
A well written memoir of a friendship between Ben Bradlee and his then wife and children and JFK, Jackie, and their children. The book also displays how Ben's job as a newspaper man and JFKs job as POTUS worked together in a symbiotic way. Somehow, these two brilliant men lived a friendship and a working relationship in such a way that the whole was greater than the sum of its parts. The book also gives you a sort of a back door look at history as it was made during JFKs presidency as well as an intimate look at personal and professional relationships JFK had with other important figures of the day. You get a real sense of how different American culture was in the late fifties and early sixties
Read more
3 people found this helpful
Helpful
Report abuse
See all reviews

David Roche
5.0 out of 5 stars Superb
Reviewed in the United Kingdom on January 24, 2015
Verified Purchase
A probing insight into Kennedy's personality and political acumen written by a close friend but in a balanced and manner.
Read more
Report abuse

Nancy G Taggart
4.0 out of 5 stars Excellent JFK 'social' info
Reviewed in Canada on December 24, 2013
Verified Purchase
It seems JFK lived his life in compartments. This book is an entertaining memoir of his (and Jackie's) friendship with Ben and Toni Bradlee. Definitely worth reading and quite funny in parts.
Read more
Report abuse

Staffie123
1.0 out of 5 stars Disagree
Reviewed in the United Kingdom on May 13, 2013
Verified Purchase
I did not like this item because the first 3 pages where missing and the back page ,you could not read the writing on it I think you should put the amount of p and p down because I was gob smacked when I saw the p and p pice just for a paper back book !!!!!!
Read more
Report abuse
See all reviews