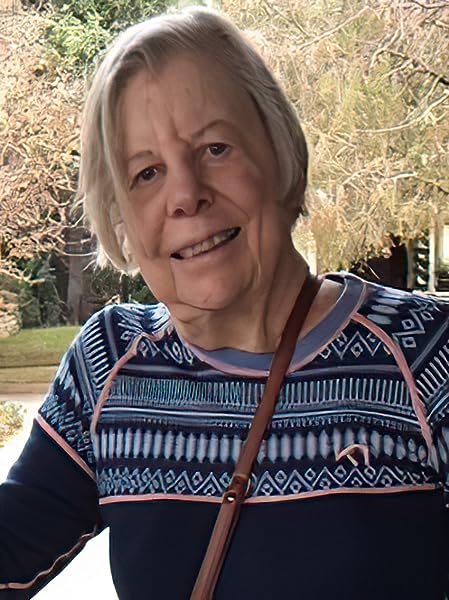 Cooking My Way through Life with Kids and Books (Stars of Texas Series) Paperback – Illustrated, July 1, 2009

JUDY ALTER is the author of fiction and nonfiction for both adults and young readers, as well as an enthusiastic cook, blogger, and reader of mysteries. She has won awards from the Texas Institute of Letters, Western Writers of America, the National Cowboy Museum and Hall of Fame, and an Owen Wister Award for lifetime achievement from WWA. Judy was named an Outstanding Woman of Fort Worth in 1989 by the Mayor’s Commission on the Status of Women (for Arts) and named one of the one hundred women, living and dead, who have left their mark on Texas by the

Judy is currently director of Texas Christian University Press in Fort Worth, a position she has held for twenty-two years. A single parent of four and grandmother of seven, she lives in Fort Worth, Texas, with her Australian shepherd, Scooby, and her fluffy gray cat, wywy. Judy entertains frequently, always experimenting and looking for new dishes. Keep up with her at www.judys-stew.blogspot.com.

Chicago, the city of my birth, boasted one of the nations biggest and busiest stockyards when I was growing up. I can remember summer evenings in our Hyde Park neighborhood when the wind shifted just so and the smell of the stockyards drifted over us. And I can remember being taken by our rather well-to-do but childless neighbors, whom I called Uncle Jack and Auntie E., to the stockyards for dinner at a "club" where each diner could brand his own steak. I wasn't much of a steak eater and would ask if they had fish. Auntie E. a devout Catholic, would say "It's not Friday. You don't have to eat fish."

TeacherWriter
5.0 out of 5 stars Delicious recipes and stories to go with them
Reviewed in the United States on April 8, 2012
Verified Purchase
This book is a fabulous memoir wrapped around delicious recipes enjoyed by Judy Alter and her family and friends through the years. Many of the recipes brought back memories of my own favorite times. I enjoyed it and devoured it in a day.
Read more
Helpful
Comment Report abuse

margaret perry
5.0 out of 5 stars Fun and useful cooking aid.
Reviewed in the United States on May 19, 2013
Verified Purchase
This was an entertaining journey with a lady who lived through it. The recipes work. They will soon be your favorite go to dishes.
Read more
Helpful
Comment Report abuse

susan nichols
5.0 out of 5 stars very enjoyable..
Reviewed in the United States on September 15, 2013
Verified Purchase
Enjoyed the story and the recipes. Related to many of my memories of family. Children and friends. Will spread the word!
Read more
Helpful
Comment Report abuse

Story Circle Book Reviews
5.0 out of 5 stars Recipes for Happy Memories
Reviewed in the United States on July 7, 2009
I loved Judy Alter's delightful memoir, Cooking My Way through Life with Kids and Books. This is a book about life and love, kitchens and cooking and kids. It's full of recipes (good food, stick-to-the-ribs American food), and it reflects the times and places of Alter's experiences as a daughter, wife, mom, working mom, and cook. That some of the times and places she writes about happen to be times and places in my own life is coincidental and certainly added to my enjoyment of the book, but I'm willing to bet that you'll enjoy it, too.

Alter's dining experience begins where mine did, in her mother's 1940s meat-and-potatoes Chicago kitchen. Meatloaf was on the menu, along with spinach soufflé, wilted lettuce, and cranberry relish--along with memories of her father's proper attention to food ("No fried chicken--in fact, nothing that you picked up with your hands") and her mother's belief that the only way a kid learns to cook is by making a mess in the kitchen.

Marriage to a young doctor, moves to Missouri and Texas, and children of her own brought Alter a different awareness of food, and her mother-in-law's Jewish cooking began to influence her own. But after seventeen years of latkes, chopped liver, white lasagna, Texas caviar, baked brie, marinated goat cheese, and other "entertainment" dishes, the marriage ended and was succeeded by what she calls the "casserole years." In her new life, Alter was a single, working mother who moved out of her "doctor's wife's house" and into a place that she and the children could manage together. In that house, in that time of her life, the menus featured casseroles. Gorilla Casserole, for example ("you could feed twelve gorillas with it for less than $6); turkey hash; eggplant parmesan; and Judy's Mild and Tentative Chili. By that time (here's where the "books" in the title come in), Alter had embarked on two simultaneous careers: she became editor of the Texas Christian University Press and she began writing juvenile nonfiction, eventually authoring "about sixty" books for young people.

And now we have reached the "living alone and liking it" years, when a meatball sandwich for one is perfect, or a single salmon fillet or a Cobb salad or banana crepes--and plenty of cooking-for-one shortcuts. But Alter still cooks for crowds when her family comes to visit, for "cooking and passing along its joy" are an important part of her life, she says. That's certainly clear from the many family photographs that illustrate Cooking My Way.

This is a homey book that made me hungry for similar times in my own past and present; made me think about the many ways good food and good cooking bring our families together; and made me smile at the many tender moments when Alter's pleasure in her life and her work comes so clearly through on the page. Of course there are difficult times, too. But a life well lived (and food well cooked) takes the raw edges off. If you want to go home again and remember what your kitchens have been like over the years, read Judy Alter's fine memoir. And then get out the pots and pans and start cooking.

by Susan Wittig Albert
for Story Circle Book Reviews
reviewing books by, for, and about women