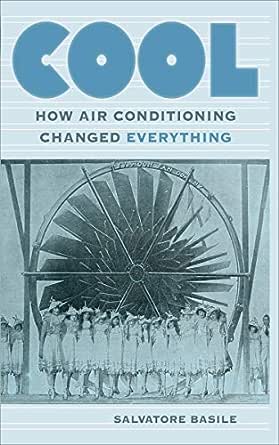 It's July and it's 94 degrees Fahrenheit. What do you do? Blast the air conditioning. It's a modern miracle of convenience and cooling. How did it happen? Sal Basile's narrative history traces the origins one of the machines we take for granted. --This text refers to an alternate kindle_edition edition.

Cool: How Air Conditioning Changed Everything provides history readers and social science students alike with a review of how air conditioning evolved and changed life in America, and is recommended not just for college collections but for any seeking a pairing
of history and lively social insights.

“Fascinating … examines the technology and its penetration into American life.” (―First Things)

. . . A lively and endlessly informative tale about how air conditioning happened scientifically and what it has done for and to us. (―The Common Reader)

“COOL tells the surprisingly suspenseful story of the development and gradual adoption of air conditioning in the United States. The puckish Basile is more than up to the task, and his copious research pays off: Not only is COOL an informative read, each chapter is strewn with more anecdotes than there are sprinkles on an ice cream cone. Some are hilarious; others, jaw-dropping. Best of all, each chapter leaves you wanting more.” (―American Scientist)

“A look at our love affair with air-conditioning … breezily anecdotal.” (―The New York Times)

SALVATORE BASILE was educated at the Boston Conservatory and The Juilliard School and began his career as a professional musician. After penning various music-related articles, he entered the field of social commentary with his history Fifth Avenue Famous: The Extraordinary Story of Music at St. Patrick’s Cathedral (Fordham). --This text refers to an alternate kindle_edition edition.
Read more

4.0 out of 5 stars
4 out of 5
30 customer ratings
How does Amazon calculate star ratings?
Amazon calculates a product’s star ratings based on a machine learned model instead of a raw data average. The model takes into account factors including the age of a rating, whether the ratings are from verified purchasers, and factors that establish reviewer trustworthiness.
Top Reviews

Frederick S. Goethel
VINE VOICE
5.0 out of 5 stars How Did They Survive Summer Before Air Conditioning?
Reviewed in the United States on June 25, 2017
Verified Purchase
As I sit here in the Central Valley of California, 2 days after we had a record heat wave with temperatures well over 100 for 8 days, it makes me wonder how people survived the summers before the invention of air conditioning. And this book, in part, tells the story of how they did that.

Treating air to make it cooler in the summer had been a goal for quite some time. Even back before mechanical air conditioning, ice was "mined" for lakes in winter and spring and stored in huge insulated warehouses to provide ice for any number of reasons throughout the year. And, to some extent, it worked. The ice box we hear about was cooled by that ice harvested from the lakes, with a man coming around to refill your box as needed.

As technology grew, in the form of the high rise building and as the theater became the entertainment place to be, a need to keep buildings cool became necessary. Many different methods were tried, including loading the basements with ice and using fans to blow air over the ice, providing a cooling effect. This was, however, inefficient and didn't fill the needs of everyone. Along came Willis Carrier with an idea that eventually became modern air conditioning.

This book covers the hunt for and creation of air conditioning in a readable and interesting manner. It certainly made me think of how far we have come, but also how far we still have to go. Well written and interesting this is a great summer read!
Read more
One person found this helpful
Helpful
Comment Report abuse

Doug
5.0 out of 5 stars How air conditioning raised our standard of living
Reviewed in the United States on March 2, 2015
Verified Purchase
I really appreciated this book on how air conditioning raised the American standard of living. Before air conditioning, summers were a slow torture of coping with inescapable heat. Theaters, churches and other places of public gathering were insufferable. Attendees were overheated due to the body heat of crowds. Buildings reeked due to body odors of unwashed masses. It was not uncommon for Congressmen to pass out due to heat exhaustion in the middle of a session.

Even U.S. presidents suffered. After enduring a two hour summer ceremony for laying the cornerstone for the Washington Monument, Zachary Taylor in his black suit downed a whole pitcher of ice milk as part of a desperate attempt to cool off. This caused a rupture, and President Taylor died within a few days.

As much of a problem as climate control was for public places, the first major application of air conditioning was for factories. The book tells the story of how Willis Carrier—a Cornell-trained mechanical engineer and future businessman who would soon play a substantial role in bringing air conditioning to a mass market—was tasked with solving a critical problem for the Sackett-Wilhelms Lithographic and Publishing Company, an established color printing company in Brooklyn.

Sackett-Wilhelms, like many industries at the turn of the 20th century, was at the mercy of weather. The quality of their print jobs was greatly impacted by small variations in temperature and humidity. A few degrees too many meant that ink would run, colors would be off, and letters would be smudged. Large print jobs would be ruined by the heat, reams of paper would be discarded and critical publication deadlines would be missed. It was not uncommon for the company to have to halt production for especially hot days.

The critical problem for Sackett-Wilhelms was not temperature per se but the humidity induced by hot days. Could young Carrier help solve this problem? Supposedly, Carrier's critical insight for air conditioning came when he was sitting on a train in Pittsburgh on a foggy night, observing moisture condensing on the window. Perhaps he could suck the moisture out of factory air—and give precise control over humidity—by creating an artificial fog and inducing condensation. This idea became the basis for air conditioning.

Carrier and competing producers of air conditioners went on to design and sell devices to cool businesses open to the public. Movie theaters soon boasted of their new chilled air, offering patrons an opportunity a cool, two hour respite from summer heat in which they could enjoy an entertaining flick. Forward-thinking department chains such as Macy's eagerly embraced air conditioning, seeing it as another mechanism to make their stores more attractive and more pleasant on the nostrils.

By the 1940s, Carrier traveled the country presenting his vision of climate-controlled homes with central air conditioning well before that became common place, and his eponymous company soon made that a reality.

I was particularly amused by Carrier's unapologetic confidence in the safety and efficacy of his products. According to one anecdote, Carrier was enlisted to install an air conditioning system for the Rivoli Theater in New York. After the project began, a building inspector threatened to delay this highly visible endeavor because he was not familiar with the new refrigerant Carrier was using, dielene, and questioned its non-flammability. Confident in the safety of his thoroughly-tested systems, Carrier whipped out a bottle of dielene, poured some into a cup, ignited a match, and dropped it into the liquid before the inspector could object. Having a way with words, the author wrote that although the dielene didn't explode, as Carrier knew it wouldn't, the inspector did, but he soon issued the needed permit.

This is a well-written book by a talented and funny author. My main and only criticism is that the narrative is sprawling at times. Even though I applaud the author for thoroughly illustrating air conditioning's overwhelmingly positive impact on human life, I sometimes felt inundated by example after example after example. I also wish that the book had more Willis Carrier stories, but that is not really a fault.
Read more
3 people found this helpful
Helpful
Comment Report abuse

Tom Craven
3.0 out of 5 stars Skimmable history of modern air conditioning with a focus on the early 20th century in the United States
Reviewed in the United States on July 11, 2018
Verified Purchase
I got this book to help me research a quiz I was writing about air conditioning. It is okay, but doesn't really grab the reader. I ended up skimming large sections. Focuses a lot on the early 20th century in America, which is appropriate for the topic, but it's a bit incomplete. I wish it had committed more to a single thesis or biography. It reads like a competent term paper written by a generalist, but not something the author is really fluent in or passionate about.
Read more
One person found this helpful
Helpful
Comment Report abuse

James R. Worzala
3.0 out of 5 stars Good reading
Reviewed in the United States on August 15, 2019
Verified Purchase
The book would have been a lot better if it had more pictures of actual AC units and installations.
Read more
Helpful
Comment Report abuse

HD NY
5.0 out of 5 stars Made me appreciate modern technology!
Reviewed in the United States on February 15, 2015
Verified Purchase
Loved this book! It was fascinating to read about how life was so different before air conditioning. It really makes you appreciate modern technology!! Note that this book isn't for everyone, but if you like books by Mark Kurlansky and Tom Standage (and certain Bill Bryson books), then you would probably enjoy this book as well.
Read more
Helpful
Comment Report abuse

Daniel Ethier
5.0 out of 5 stars A fascinating story
Reviewed in the United States on July 4, 2015
Verified Purchase
I found this book fascinating. Not only the process of how air conditioning came to be and to be so common. But what life was like before air conditioning, and how people coped with the heat and humidity. The false ideas that people held and just accepted as true. Just a fascinating read.
Read more
Helpful
Comment Report abuse

peter golding
5.0 out of 5 stars A warm look at cool.
Reviewed in the United Kingdom on March 8, 2015
Verified Purchase
An amusing and thorough history of air conditioning; given as a present to an HVAC practioner and much liked.
Read more
Helpful
Sending feedback...
Thank you for your feedback.
Sorry, we failed to record your vote. Please try again
Report abuse