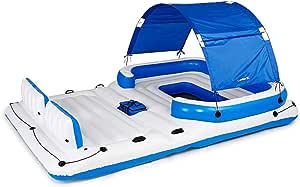 Visit the Bestway Store
4.3 out of 5 stars 1,348 ratings
| 288 answered questions
Amazon's Choice recommends highly rated and well-priced products.
Amazon's Choice for "lake float"
Available at a lower price from other sellers that may not offer free Prime shipping.

For warranty information about this product, please Click here [PDF ]

International shipping will be 189.00 US dollars

4.3 out of 5 stars
4.3 out of 5
1,348 global ratings
How are ratings calculated?
To calculate the overall star rating and percentage breakdown by star, we don’t use a simple average. Instead, our system considers things like how recent a review is and if the reviewer bought the item on Amazon. It also analyzes reviews to verify trustworthiness.

Anna Y.
5.0 out of 5 stars Can’t afford a yacht? Buy this instead.
Reviewed in the United States on July 2, 2018
Verified Purchase
We named it the Floatchilla, and decided that there would be semi-regular Floatchilla parties.

It’s 9x13’ (3x4m); if you live in an apartment, it’s as big as your living room. It’s strong, too; even that net part in the bottom of the couch area that doesn’t look strong; it held two adults sitting down directly on the net, and it held when someone decided to swim underneath for a surprise shark attack, causing those on the net to flail in surprise. The Floatchilla held up to the abuse of an adult flopping around on it like a cross between a fish out of water and a sea lion, and it didn’t care when adults tried to climb over the couch side to board it, where it was clearly not meant to be boarded. The mighty Floatchilla just chilled and took all the abuse hurled at it. Even on a very windy day, with parasailers and hang gliders taking advantage overhead, that reportedly flimsy sunshade held up perfectly, and even functioned as a sail at times.

You might be wondering if you need a Floatchilla in your life. Designed for six adults, we have seven crazy people on board, and it could probably manage ten. It’s easier to board than it looks, and has handholds on either side to assist, plus a ramp on one side. (But the truly determined will find that it is possible to bellyflop on board directly from the water.) It has six cup holders built into the sofa section, and a small built-in cooler.

What’s the downside, you ask? The cooler’s not large enough to fill seven adults with food and drink for five hours, so you may find that you have to supplement. Also, you may never get all the air out afterwards, which makes putting it back in the original box challenging. The box itself is larger and heavier than you’re expecting.

Tips? Get those really cheap Intex air pumps that everybody buys with it. I read reports that they were crap and ran trough batteries before filling half a mattress, but I had three and filled the Floatchilla within 15 minutes without anything overheating or breaking, and even after deflating, they still run on their first set of batteries. (Get those Amazon batteries, too; they’re cheap and good quality.) While you’re at it, get that small collapsible anchor that everyone gets, too. It held the Floatchilla and all its inhabitants even on a day with pretty decent waves. Don’t float out to sea and die a tourist’s death on the Floatchilla — chill responsibly with an anchor.

We’ll probably invest in a big rolling plastic container from Home Depot for storage and transport in the future, just to make things easier. I bought this for my husband’s birthday, but my friends loved this so much that we’re planning to have many more Floatchilla parties, and you should, too.

Deedee
5.0 out of 5 stars Fun for the whole group!
Reviewed in the United States on July 9, 2018
Verified Purchase
This bad boy easily held 8 adults and one 2 year old! I tied it to a small bell anchor to keep from drifting to the shore and away from the dock. I got the one with the canopy just because it is great to be able to have some shade if needed. The canopy does act as a sail so be aware and be prepared.
I kept it out over night for 2 nights, by 3rd day it needed some more air as to be expected. Can not speak for customer service cuz haven’t had to use them. I went with intex brand bcs I have a couple of their air mattresses and have really liked them.
Read more

Amazon Customer
5.0 out of 5 stars It’s huge!
Reviewed in the United States on November 27, 2018
Verified Purchase
This was a successful purchase. I was a little hesitant to buy it after reading the negative reviews but if you know how to inflate an air mattress then this shouldn’t be a problem. I used an air mattress pump to inflate it and it does the job in about 15 min. It is pretty big and it definitely can fit 8 people easily. Me and my friends had a blast on it!
Read more

Jilly Jenkins
5.0 out of 5 stars LIFE CHANGING
Reviewed in the United States on November 3, 2017
Verified Purchase
BEST PURCHASE EVER! LIFE CHANGING :)
We have used it 4x this summer and it is a BLAST! A beast to carry to the water (need 3 people but 4 better), but blows up fast with my extra power pump. Be ready to put some time into cleaning it after use, and use your air pump to deflate it after use also. It will get it nice and flat. Then you just have to roll it up and put it into a large plastic tub to store. Buy an anchor and soft rope with carabiner to be able to clip the anchor to the side ropes so you won't float away. Otherwise you will never stay in the same place. Holds up to 8 adults no problem, can squeeze in up to 10 adults.
Read more
74 people found this helpful
Helpful
Comment Report abuse

Sarah O’Halloran
5.0 out of 5 stars Go for shade!
Reviewed in the United States on October 19, 2015
Verified Purchase
This monster is awesome. It took surprisingly little time to initially assemble and blow up. We bought this for a music festival on a reservoir and needless to say we were the envy on all other water goers.

If you're debating between this model and the version without the shade, spend the extra few buck and go for shade. It allowed us to stay out on the water for much longer without frying.

I do wish the floating island came with paddles. The shade acts as a sail and will take you in whatever direction the wind is blowing. After ending up in a shallow bank over and over again someone had to get out and slowly paddle is in the opposite direction. I'll be buying paddles for our next excursion.

In case it isn't obvious by the pictures the seat under the shade has a mesh bottom which was great since it kept us cool and prevents you from taking on water.

We had 10 adults on at one time and we probably could have fit at least 2 more comfortable.
Read more

Jake Gross
1.0 out of 5 stars Subpar product and poor customer service
Reviewed in the United States on July 23, 2018
Verified Purchase
We purchased this for $150 through VMInnovations here on Amazon. After each weekend use on the lake we deflated, dried, and stored in a cool, dry area. Within 2.5 months a seam tore and the backrest would not hold air. I called Bestway and after being put on hold for 20 minutes was informed that they provided no warranty past 30 days. This is a subpar product. You are better off buying cheaper products sold through Wal-Mart or Costco. Bestway was not even apologetic about the issue.
Read more
43 people found this helpful
Helpful
Comment Report abuse

John
3.0 out of 5 stars Has flaws
Reviewed in the United States on November 5, 2017
Verified Purchase
These float impresses anyone who sees it, however it is almost impossible to climb up on. Last summer, we ended up doing our best to build a rope ladder to climb it. Also, it needs a very large anchor. We use a sandpak that I bought on amazon. So far, we have used it for two summers and had many people including kids all over it and have had no leaks.
Read more
50 people found this helpful
Helpful
Comment Report abuse
See all reviews

Amazon Customer
2.0 out of 5 stars Do not Purchase via Amazon - Inferior canopy
Reviewed in Canada on July 12, 2017
Verified Purchase
One of the canopy poles did not last the weekend with a small wind. It snapped and split at a joint. Contacted Regal and they said that they are just the shipper and to contact Coolez an American company. This is going to be a very convoluted warranty issuem
If you really want this item order one from Costco as they stand behind their products.
I will update if I get a response from Coolez.
Read more

Raskids
3.0 out of 5 stars Choices not available
Reviewed in Australia on December 29, 2019
Verified Purchase
The beach lounge looks fine however when ordering there was no way of choosing which colour - despite there being 3 colour choices shown. We really didn't want purple, but of course, that's the colour that arrived.
Read more
Report abuse

Gord Walpole
2.0 out of 5 stars Two Stars
Reviewed in Canada on December 12, 2017
Verified Purchase
Lasted a month with just sitting on it and then a toe nail wrecked it on a seam.
Read more
Report abuse
See all reviews

Page 1 of 1 Start overPage 1 of 1
This shopping feature will continue to load items when the Enter key is pressed. In order to navigate out of this carousel please use your heading shortcut key to navigate to the next or previous heading.
Back
Next
Pages with related products. See and discover other items: water islands, pool floating tubes, pool islands, swimming rafts, beach party game, pool rafts