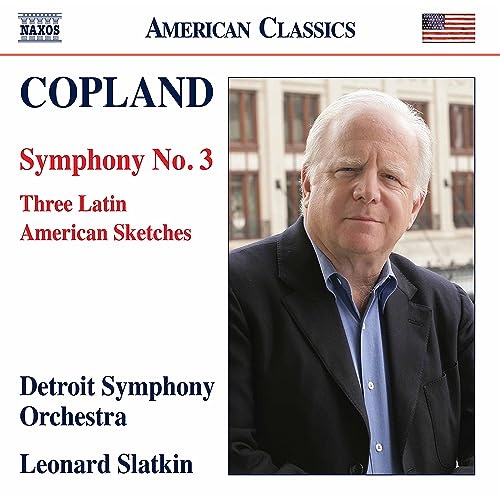 Detroit Symphony Orchestra
June 9, 2017
4.6 out of 5 stars 27 ratings
See all 3 formats and editions Hide other formats and editions
Buy the CD album for $11.99 and get the MP3 version for FREE.&nbspCD album ships from and sold by Amazon.com. Terms and Conditions. Does not apply to gift orders. Complete your purchase of the CD album to save the MP3 version to your Music Library.

Stephen Quinn
5.0 out of 5 stars Copland's masterpiece intact at last!
Reviewed in the United States on July 15, 2017
Verified Purchase
Seems like I've been waiting my whole life for this recording. I came of age with the classic Bernstein recording on Columbia from a half century ago and have never found a version the equal of that. I saw Slatkin conduct this long-lost version with the LA Philharmonic a decade ago and have been itching to get my hands on this. Why did it take so long!?

First of all; the recording is simply superb, a wonderful sense of presence and depth reveals lots of individual parts I've never heard before. The massed brass and horns simply shine through. Is it the equal of that Bernstein  Copland: Symphony No. 3 - Symphony for Organ & Orchestra  recording ? Not quite. While Leonard Slatkin handles this music with the reverence it deserves his tempi sometimes seem a bit deliberate and inflexible. That old Bernstein recording had a muscular propulsive quality that I've never heard equaled since, certainly not in Bernstein's own late DG recording. This music is the embodiment of the American empire at its absolute peak of greatness and optimism. Perhaps it takes a young conductor to fully capture those qualities. Maybe we'll have to wait for Dudamel or one of the younger generation to tackle it.

For now though, we finally have a recording of the symphony as Copland originally envisioned it, with its grandiose finale intact. Shame on Bernstein for persuading him to change even a note!
Read more
14 people found this helpful
Helpful
Report abuse

J S Lasher
4.0 out of 5 stars The complete 4th movement on CD for the first time.
Reviewed in the United States on July 20, 2017
Verified Purchase
A noble performance of an American classic. It is interesting to compare Slatkin's previous recording of the Copland Third with the St Louis Symphony Orchestra on RCA/BMG classics. This recording, which is the first commercial release of the complete fourth movement, is most welcome. My only complaint is the fact that Maestro Slatkin hurries through the 12-bars of the previously excised section. Otherwise, a worthy edition for aficionados of Copland's music.
Read more
2 people found this helpful
Helpful
Report abuse

Charles Hernandez
5.0 out of 5 stars COPLAND PATRIOTIC
Reviewed in the United States on December 14, 2018
Verified Purchase
COPLAND, WHOM WAS A RELATIVE OF CHARLES IVES, SEEMS TO EPITOMIZE THE RURAL AMERICAN & POMP OF PROCER AMERICA WITH SYNCOPATED MOVEMENTS & THE FINALE OF THE THIRD, AS THE FAMOUS FANFARE THEME IN SYMPHONIC GLORY!; THE THREE LATIN SKETCHES ARE RHYTHMIC AND VERY NICE SHOWCASE PIECES, SO IVES JR FANS, IT IS RED, WHITE & BLUE. C.A.B.
Read more
One person found this helpful
Helpful
Report abuse

Peter Dale
5.0 out of 5 stars Excellent recording.
Reviewed in the United States on April 28, 2020
Verified Purchase
The performance and recording are excellent. Useful information in the booklet. The Latin American Sketches are nice to have, but are not significant works.
Read more
Helpful
Report abuse

Dr Stephen Hall, Ireland
4.0 out of 5 stars Well, here it is
Reviewed in the United Kingdom on July 6, 2017
Verified Purchase
I agree with the two reviews so far on Amazon.com that this release of Copland's 3rd symphony (1946) without cuts is significant. While the Naxos engineers seem to favour the higher frequencies (a common fault with digital knob-twiddlers) just a bit of adjustment on good equipment allows Slatkin's performance to take its place as "definitive" and somewhat different in balance from his Louisville version.
Here we have a 'slow-burn' conductor, in terms of his recognition, in full maturity giving us what the composer wrote and listeners benefit from Slatkin's supreme understanding of orchestras. His pacing throughout is perfect and sure, in contrast to Neeme Jarvi who just doesn't 'get it' somehow or even Bernstein's earlier of his two recordings -- with the Lenny cuts of course.
In some ways Slatkin here is closest to the composer's recording and a performance Copland gave on radio I dimly recall from long ago. That performance might be in the BBC vaults along with Copland's Harris No 3. Shame.
As a lifelong devotee of American music from when Europe was so snobby about it I have imagined the perfect Copland 3. Well, here it is.

So why only 4 stars? Well, this is product review and Naxos could easily have asked Mr Slatkin to make the 'filler' a suitably weighty work to go with the symphony. 'Inscape', written 21 years after the symphony would have been ideal -- especially with the Detroit on such excellent form at one with their great conductor.
Read more
6 people found this helpful
Report abuse