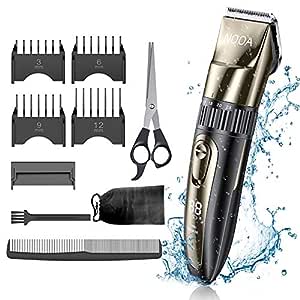 12 in 1 haircut kit for everything you need for a successful hair cut at home or on the go.

4.4 out of 5 stars
4.4 out of 5
53 global ratings
How are ratings calculated?
To calculate the overall star rating and percentage breakdown by star, we don’t use a simple average. Instead, our system considers things like how recent a review is and if the reviewer bought the item on Amazon. It also analyzes reviews to verify trustworthiness.

Amanda Grenier
5.0 out of 5 stars Comes with everything!!
Reviewed in the United States on August 4, 2020
Verified Purchase
These clippers are so awesome! I got them for my husband. The length that you want your hair cut to is easy to adjust by the twist of a handle. And it comes with everything! Charging cord, blade depths, scissors and a comb. Also, a bag. I would purchase these again. The clippers themselves are also VERY QUIET!
Read more
4 people found this helpful
Helpful
Comment Report abuse

Salene Bowers
5.0 out of 5 stars bought it for my family
Reviewed in the United States on September 23, 2020
Verified Purchase
Over the years I feel like I'm having to buy new clippers every year from one of the box stores because they die and stop working. I decided to try something new and the moment I opened the box I was impressed. These clippers are heavy duty and well made. The batteries last for a very long time and give a great shave for my stylish look (lol) It comes with just about everything you need for a shaver so you can cut for different lengths.
Read more
2 people found this helpful
Helpful
Comment Report abuse

Kyla Ridge
5.0 out of 5 stars Does exactly what you need it to do
Reviewed in the United States on August 12, 2020
Verified PurchaseEarly Reviewer Rewards(What's this?)
Works well. Love that it’s cordless. Super easy to use
Read more
One person found this helpful
Helpful
Comment Report abuse

Alex Arellano
5.0 out of 5 stars Very sharp hair cuts quickly
Reviewed in the United States on September 30, 2020
Verified Purchase
It's very sharp and very good to use. I bought it a second time
Read more
Helpful
Comment Report abuse

VIDFAN
TOP 1000 REVIEWER
4.0 out of 5 stars Cordless Trimmer with Stiff Setting Ring
Reviewed in the United States on July 20, 2020
Vine Customer Review of Free Product( What's this? )
This is a case of substance over style. I wasn't impressed when I received this trimmer in a plain, generic cardboard box - it was cheap looking, with the lack of graphics telling me this wasn't a well-known brand with a marketing budget. Then I opened it, and the hair trimmer didn't seem carelessly constructed. It's fairly lightweight but the head is made of stainless steel and has a bit of a heft. It came fully charged and easy to turn on with the flick of a thumb. A very cool LED light tells you how much battery power you have left and you can toggle between regular and "turbo" mode - there are only two power settings.

In addition to the trimmer, you get a bunch of accessories including a charging cable, black storage bag, four plastic trimming attachments of various lengths, a three pronged cleaning brush and yellow sponge, finishing scissors, and a comb. The scissors, comb, plastic attachments and bag are 99 cent quality, but functional.

My biggest gripe is the turn and twist ring below the top part of the steel head. It's labeled with different trim lengths (1.2, 1.6, 2.0, etc) but my issue is that it's not that easy to turn and if you have arthritis or difficulty opening jars you will have difficulty turning this ring. It makes a clicking sound as you choose your setting but it sticks and you have to force it a little.

The best thing is that it is cordless and holds a charge pretty well. It's also quiet, making an unobtrusive humming sound.

Overall this is a workmanlike trimmer, good for what you need it to do but the awkwardness of the twist setting ring is the main thing that would prevent me from giving it a rave review. Presentation also counts in my view, and if you were giving this as a gift I would throw away the cheap, nameless cardboard box and put it in a nicer, more colorful box.

Terry R. Nye
TOP 500 REVIEWERVINE VOICE
4.0 out of 5 stars sturdy and well built; versatile for both haircutting and beard trimming
Reviewed in the United States on July 16, 2020
Vine Customer Review of Free Product( What's this? )
I have a full beard, so I’m always interested in better beard trimmers to keep it maintained. Most of the cordless beard trimmers one finds these days are small and somewhat under powered. This NOOA Hair Clippers Cordless Hair Trimmer looked like it might be more heavy duty, so I was anxious to give it a try.

This trimmer set arrives nicely boxed. Included are the trimmer, a blade guard, a proprietary charge cable, several trimming guides, a cleaning brush and cleaning sponge, a comb, a pair of scissors, a fabric storage bag, and a brief printed manual. No oil for the trimmer was included, which seems like a real negative since the manual states very clearly the trimmer requires regular treatment with oil.

The trimmer itself is larger than I expected. It is larger than a typical cordless beard trimmer but smaller than a full-size haircut trimmer. This one is sized in-between and would be suitable for either type of hair cutting. Its construction feels very sturdy, but it is not overly heavy. The included trimmer guides are short enough for close hair trimming, but there are also guides for a longer cut. They are easy to remove and replace on the trimmer and snap into place for a secure guide. There is also a ring adjustment on the trimmer body for very precise, short trimming cuts. The trimmer blade itself can be easily snapped on or off the trimmer body for easy cleaning and oiling. Since no oil is included, you will need to use an appropriate lightweight oil such as sewing machine oil, firearm lubricant, or oils marketed specifically for shavers (all available on Amazon).

The trimmer has a rechargeable lithium ion battery. The one I received already had a full charge, but I went ahead and let it charge for an hour or two just to make sure. The charging cable is proprietary with one end being a standard USB plug and the other being a proprietary plug. I wish this trimmer was designed for a micro-USB plug, which would have made it much easier to replace the cable if anything happens to it. That said, the trimmer charges easily, and there is a large, lighted, numeric indicator on the body of the trimmer to tell you how much charge is left.

Using the trimmer is easy. It has a nice sliding on/off switch and is actually fairly quiet while running. The actual running time per charge is estimated to be 200 minutes, which is ample time for several haircuts and/or beard trims between charges. It can be fully charged in 3 hours.

The included comb and scissors are functional but pretty cheap in construction. They are adequate to do a complete haircutting job, though.

Overall, I really like this trimmer set. It is versatile in that it can be used for both haircutting and beard trimming. It also seems to be very well built. For its low cost, this set is relatively inexpensive. I have paid a lot more for other branded trimmers that came with less accessories and weren’t built as well. The only real negatives are the proprietary charge cable and lack of oil for maintenance. Considering the low cost, these are minor issues, though. This set would be ideal for anyone wanting to cut their kids’ hair or for beard trimming.
Read more
One person found this helpful
Helpful
Comment Report abuse

Oswaldo
VINE VOICE
5.0 out of 5 stars Watch YouTube videos before trying to cut your hair
Reviewed in the United States on August 10, 2020
Vine Customer Review of Free Product( What's this? )
With quarantine, my father- in-law hasn’t had a good trim in months. I got these and figured it wouldn’t be too hard to use, & it was fairly easy up until I accidentally took off a large chunk from the front. We went with a military hair cut after that (it’ll grow back fast). I was inexperienced & we were excited to try them out, so I’d definitely recommend watching some videos on how to properly cut hair.

They cut very well & didn’t get jammed at all. It comes with a tiny brush that you can use to remove hair from the head of the clippers. We were out there for an hour trying to mend the haircut and it still had plenty of battery life left. The noise level is low & being cordless makes it very convenient. It was easy to change the guide combs & alter the length of it. There’s a lot of room for different cut lengths, just take your time and don’t rush.

Our first time using clippers, but we both really liked how they work! I may have messed up, but it wasn’t difficult to use. Practice makes perfect.
Read more
Helpful
Comment Report abuse
See all reviews