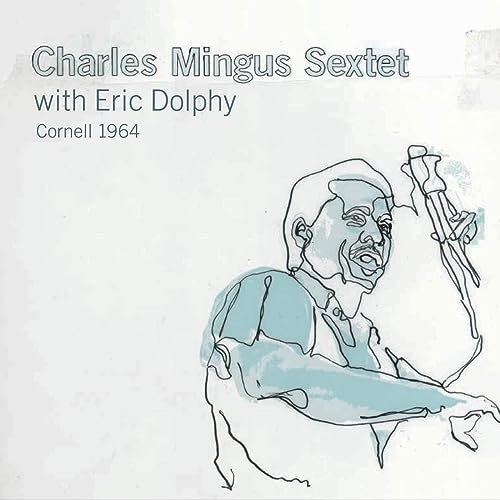 Charles Mingus Sextet & Eric Dolphy
January 1, 2007
4.7 out of 5 stars 44 ratings
See all 3 formats and editions Hide other formats and editions
Buy the CD album for $63.98 and get the MP3 version for FREE.&nbspCD album ships from and sold by Amazon.com. Terms and Conditions. Does not apply to gift orders. Complete your purchase of the CD album to save the MP3 version to your Music Library.

Sky Mann
5.0 out of 5 stars More of the "April 64" sextet? YES!
Reviewed in the United States on August 28, 2007
Verified Purchase
If you're already heavy into Mingus and enjoy the "April 1964" sextet you'll have to get this. The performance is inspired and joyful and everyone in the band is given ample room to contribute. Those familiar with the Town Hall date that followed in April and the European tour after that will know most of these titles and their arrangements for this group. Somewhat less familiar will be a driving version of Dukes "A-Train" and a real surprise in a cruising performance of Jitterbug waltz that gives Dolpy a chance to blow over some up tempo changes on his flute which he does very well indeed.

Sound quality is very listenable falling somewhere between the 64 Town Hall date and some of the April 64 European bootlegs. For the most part everyone is audible with only the trumpet, piano or bass being lost in the mud at times when the band is playing loudly. Little to no high frequency content overall and Meditations has some dropout, phasing and mid range "swooshing" problems at times but this becomes irrelevant since the music is so good.

One of the things this rhythm section had a strong ability to do was up the ante on an already hard swinging grove and this happens numerous times on these discs where in the middle of someone's solo Byard and Richmond will take Mingus' lead and push the groove up to the next level inspiring the soloist to do sing out and really listen to himself.

Surprisingly we only hear Dolphy on alto on "So Long Eric" during the ensemble passages and even more surprising, he doesn't solo on this piece or it was edited out (although I didn't notice an edit). Dolphy is on bass clarinet or flute for all other selections. I was also surprised at how fully formed the arrangements of these pieces were and how much liberty the group was already taking with them a month before Town Hall and the Europe tour. I was thinking they'd be a bit stiffer than what I was familiar with from three weeks later but that is not the case. A lot of these must have been played regularly at the Five Spot Café prior to this date at Cornell.

Unfortunatly this release will probably not get hyped as much as the Coltrane/Monk Carnegie Hall find a couple of years ago likely because of the cuts being so lengthy and musically dynamic in addition to this group having been heard on previous releases but this is certainly music of the same caliber.

Probably not the best choice for an introduction to Mingus but if you're already into the man's music, you'll want to pick this up.
Read more
12 people found this helpful
Helpful
Report abuse

Amazon Customer
5.0 out of 5 stars Mingus Live at Cornell - 1964
Reviewed in the United States on July 14, 2008
Verified Purchase
When I found this album and listened to it for the first time, I felt I had discovered something wonderful and unique. Here is an album that has all the positives and negatives of a live end-to-end recording. Sure, it has rough patches along with some sound and recording issues, but it doesn't matter.

I had the sense of being right there with Mingus and his group as they played / played off each other and grooved in a number of wild and Mingus-like ways. Sounds / rhythms / riffs / grooves / puns and explorations are all to be found on this wonderful album. Thank God this recording was found (even if posthumously). It is as if Mingus left us all an inheritance - his own gift to the rest of us as reminder of his wonderful sound and the incredible music he made happen several decades ago...
Read more
2 people found this helpful
Helpful
Report abuse

T. Bombara
5.0 out of 5 stars Eric Doplhy with Charles Mingus
Reviewed in the United States on June 27, 2013
Verified Purchase
The version of Fables of Faubus is fantastic. Great bass clarinet from Doplhy. It was an incredibly creative period for all of the participants with the secret weapon being the piano playing of Jaki Byard. The history of American music is encapsulated in his solos.
Read more
2 people found this helpful
Helpful
Report abuse

Bernie Koenig
5.0 out of 5 stars WOW
Reviewed in Canada on August 26, 2007
Verified Purchase
The 1964 tour has a special place for Mingus lovers. Every concert and most rehearsals were recorded and/or filmed. There are numerous legit recordings as well as a host of non legit ones. The band was great: Mingus and Dannie Richmond, Jaki Byard, and the horns of Eric Dolphy, Clifford Jordan, and Johnny Coles. Coles became ill midway through the tour so it is great to have him on this recording.

This concert was a month before the tour---almost like a tryout of the material with this group. And, for someone like me, who has ALL the recordings from the tour, this one is a standout. The players are all hot and give great extended performances. Mingus himself is in a great mood as can be heard with his comments to the both the audience and band members during the performances.

Take the A Train is a real standout since it was done only one other time on the tour. And When Irish Eyes are Smiling is a genuine hoot.

The highlight for me is Meditations, arguably Mingus' best composition. here it gets a 31 minute workout, much longer than any other performance on the tour.

So even though many MIngus fans will have heard most of the material on this cd with these same musicians, the performances here are definitely worth the price of admission.
Read more
2 people found this helpful
Report abuse