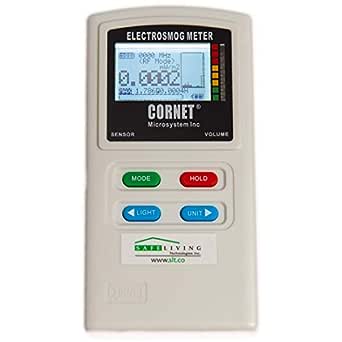 $149.00
+ Free Shipping
Sold by: EMR Shielding Solutions
Have one to sell?
Sell on Amazon
Loading recommendations for you

4.3 out of 5 stars
4.3 out of 5
87 global ratings
How are ratings calculated?
To calculate the overall star rating and percentage breakdown by star, we don’t use a simple average. Instead, our system considers things like how recent a review is and if the reviewer bought the item on Amazon. It also analyzes reviews to verify trustworthiness.

Scott
3.0 out of 5 stars Reasonably accurate RF, not-so-good magnetic.
Reviewed in the United States on April 23, 2018
Verified Purchase
I have access to various types of equipment I used to test this meter. The ED88Tplus from Cornet accurately reads RF (radio frequency) strength from ~1.5G Hz to ~ 2.5 GHz, and it reads somewhat low outside that frequency range. At a lower frequency of 300 MHz, it reads ~90% low, and it also reads ~90% low at ~ 5 GHz. That is actually reasonable performance for a low-cost meter, and is sufficient to detect most frequencies of RF typically encountered, except TV transmitters below channel 14, and FM and AM radio, which are below 300 MHz. Also not measurable are the not-yet-implemented 5G devices (up to 25 GHz).
When placed in an cage that is shielded from all RF, the 88Tplus correctly reads less than .001 mW/m² and it is accurate at frequencies around 2 GHz when the RF level is increased above zero.. There is a peak RF capture feature which displays the height of quick RF pulses (typically from cell towers, wireless devices, etc.). However, there is a problem with the way this peak capture is implemented-- the main displayed number shows each pulse height for 1/2 second before reverting to the actual RF field strength (a lower number) and the pulse height is also "permanently" shown a secondary number underneath the main number. If the pulses of digital information occur faster than 2 per second (typical of cell towers and routers), the main and secondary numbers both show the peak without ever getting a chance to show what the actual RF level is. Even the row of LEDs and the bar graph both remain elevated to the pulse height and there is no indication of what the average is, which is typically 1/10 to 1/100 of the pulse height. There is also no indication of whether the RF that is being measured is pulsing or constant. If you are only interested in the pulse heights (and not the average value) this meter works well on RF.
The E-field (AC electric field) measures the E field at 60Hz (North American powerline frequency) fairly accurately. At zero E field, the meter reads 2 V/m (volts per meter) instead of 0 V/m. This error is tolerable because the resolution is 1 V/m. (Oddly, the manual claims that the resolution is a more crude 10 V/m.) The meter is not equally sensitive at frequencies from 50 Hz to 50KHz, as the manual implies. Instead, at 3000 Hz, the meter reads ~1500% too high, dropping back to correct sensitivity at ~800 KHz. The E field is single-axis, in the same direction as the long dimension of the meter. A single axis sensor works well for E field, because the field is created by charged particles, or "monopoles" (electrons and protons). Simply point the top face of the meter outward in the direction you want to measure the E field, and the reading is generally correct.
If an E field source is due north of you, the field direction at your location will generally be along a north-south line. That is why you point an E field meter toward the source (north in this example). However, the correct measurement of magnetic field is more tricky, because magnetic monopoles don't exist. If a magnetic field source is due north, the field at your location may be north-south or east-west or up-down or even a diagonal direction. Therefore, if you point a single-axis magnetic meter toward a magnetic source, the meter may just read zero even if the field is strong. In order to measure this field accurately, you would need to point the meter in various directions until you see a maximum. This takes some time. The ED88Tplus is only single-axis in magnetic. It also reads 0.6 milligauss (0.06 uT) in a true zero field, and is therefore not usable below 0.6 mG. It also has a slow response time (~1 second) and the mG readings are only accurate at ~55 Hz (between 50 Hz and 60 Hz). At higher frequencies, it reads up to about 1000% high, and the 10mG overrange limit in the sensitive range is annoying.
Overall, the meter is good for measuring the higher-frequency RF, especially the peak height of pulsed signals. The electric field mode works reasonably well and is accurate at 60 Hz. The magnetic field mode, however, has multiple problems. The screen has good visibility in daylight and a backlight can be turned on for indoors. However, the screen is small and is in the form of square pixels. The numerals 0,8, and 5 run together and are difficult to read if next to each other. The manual is incorrect about certain specs and doesn't explain everything about the displayed parameters. Also, it has several grammatical errors and strange phrases. I would guess the writer's primary language is not English, which leads me to question the "Made in USA" printed on the back of the meter.
Full disclosure: I am affiliated with a US company that manufactures various lab instruments, including electromagnetic measurement equipment.

Sleepwell
5.0 out of 5 stars This will change your life for the better.
Reviewed in the United States on September 14, 2018
Verified Purchase
Four of my friends have cancer. I’m trying to reduce my exposure to EMF. Thanks to my Cornet meter I was able to really see what items in my home were putting out really dangerous radiation. My bedroom is now EMF free. I put a smart meter cage on. A router guard and moved them to far ends of the house. Realized how much emf a lap top puts out and a cell phone. I believe WiFi will be the worst thing we have come up with since cigarettes. In the 50s the government said for a long life smoke. My Nest was putting out crazy amounts of EMF so I simply disconnected it from the wi fi. Cheers
Read more
44 people found this helpful
Helpful
Report abuse

William J. Croft
5.0 out of 5 stars Excellent meter with extensive features, data logging. Outstanding tech support.
Reviewed in the United States on August 28, 2018
Verified Purchase
If you Google Cornet ED meter on the web (select the videos tab), you will find many recommendations by EMF mitigation experts. They are fond of Cornet meters because at a reasonable price, they offer a huge number of features not even found with meters at twice the cost.

I have found Cornet tech support / email response to be stellar, with replies coming back the same day. Such support is not often found with consumer level electronics.

What I particularly value with this meter are the three modes (RF, magnetic, and electric), the peak hold feature, and the ability to also capture the RF emitting frequency that produced the peak. This is valuable when dealing with several competing signal sources. This meter also displays signal strength in multiple helpful ways: colored LED bar graph, digital (current and peak), sound output, and HISTOGRAM, which is very useful for seeing intensity patterns over time.

A built-in data logging feature can make recordings over a period of time. And then the data can be uploaded to a spreadsheet over the side USB port. This feature is described in a downloadable document on the Cornet website. Such recordings are invaluable for RF signals that are only infrequently transmitting, such as utility "smart meters".

PHYSICS NOTE: Several users posting reviews here are confused by what is called the inverse square law for electromagnetic radiation. This dictates that field strength falls off, inversely proportional to the distance from the source, squared. So yes, the measured values do fall off rapidly as you move away from the source. This no deficiency of the meter, it is just plain physics.
Read more
28 people found this helpful
Helpful
Report abuse

S. Buchanan
1.0 out of 5 stars Who assembled this thing?
Reviewed in the United States on July 12, 2019
Verified Purchase
I just got the meter from my mailbox and there are two glaring issues with this thing. How can I trust this to take an accurate reading when:
1. The battery was installed - meaning it probably was previously owned.
2. Someone who can't read put it together or it was taken apart and put back together wrong (see the photo).
It's going back.
Read more