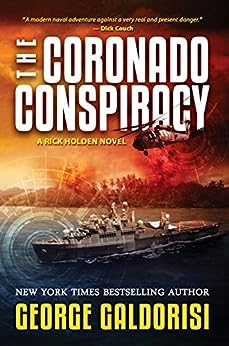 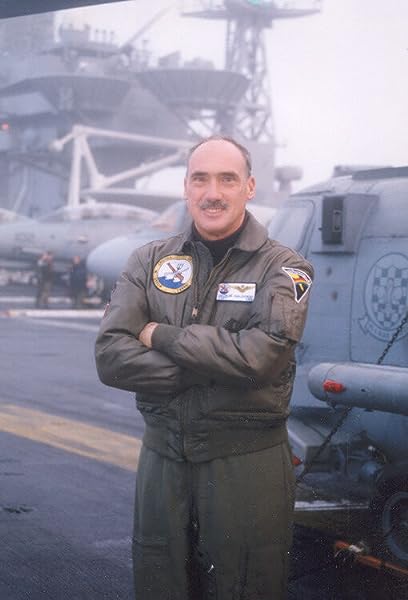 Off the shore of Costa Rica, the Navy command ship USS Coronado launches an all-out assault against one of the most powerful drug lords in Central America. The strike force is in position; the Blackhawks are armed and airborne, and the high-tech fist of the U.S. military is poised to come down like a sledgehammer. Everything is going according to plan until the quiet jungle erupts in a chaos of blood, shrapnel, and fire.

When CIA Operative Rick Holden and Naval Intelligence Officer Laura Peters begin investigating the circumstances of the ambush, they uncover something much more sinister than a failed military operation. There’s a conspiracy at the very heart of the American government.

GEORGE GALDORISI is a career naval aviator. His thirty years of active duty service included four command tours as well as five years as a carrier strike group chief of staff. In addition to his Rick Holden thrillers, he has written several bestselling novels in the rebooted Tom Clancy’s Op-Center series, including Out of the Ashes, Into the Fire, Scorched Earth, and Dark Zone. With his longtime collaborator, Dick Couch, he coauthored the New York Times best seller, Tom Clancy Presents: Act of Valor. He is also the author of The Kissing Sailor, which proved the identity of the two principals in Alfred Eisenstaedt's famous photograph; as well as over 300 articles in professional journals and other media.

George is the Director of Strategic Assessments and Technical Futures at the Navy's Command and Control Center of Excellence in San Diego, California. He and his wife Becky live in Coronado, California. You can connect with him on Facebook, Twitter, and his website/blog: http://www.georgegaldorisi.com.

Madonna E. Shannon
5.0 out of 5 stars More authentic than Tom Clancy's military thrillers!
Reviewed in the United States on February 27, 2021
Verified Purchase
Amazon Customer
George Galdorisi’s recent New York Times’ best seller, The Coronado Conspiracy, has placed him among the most elite authors of suspenseful military fiction, including Tom Clancy. Perhaps he is even better. In contrast to Clancy’s non-military background, CAPT George Galdorisi’s 30-year career as a former naval aviator, including several senior command tours, has given him the unique ability to describe, with exceptional authenticity, the military culture and the varied military organizations, operations (on land, sea and in the air), platforms, weapons and jargon, all woven into a highly intricate, suspenseful and well-written military thriller. In addition to military operations, the book delves imaginatively into the delicate political topics of civil-military affairs, hard-ball politics and, eerily prescient, presidential impeachment. Among other things, this book, the first in a 3-book series, introduces an undercover CIA operative, Rick Holden, stationed as a Navy SEAL on the USS Coronado, a Navy Task Force flagship tasked to fight in our nation’s war on drugs. With my reading lamp staying lit long into the night, I can’t wait to finish George Galdorisi’s second novel of the Rick Holden series, For Duty and Honor.
Read more
One person found this helpful
Helpful
Report abuse

Taylor Kiland
5.0 out of 5 stars I could not put this book down...
Reviewed in the United States on July 7, 2020
Verified Purchase
I admit: I usually do not read thrillers. I love military stories, but mostly non-fiction. But, the minute I picked up The Coronado Conspiracy, I could not put it down. As a former naval officer, I found the premise of the book captivating. How far would military leaders go when they don't like the direction the president is taking their country? George Galdorisi does an excellent job showing how these senior officers evolved into evil power mongers, intent on bringing down a president -- at a enormous cost to their fellow military soldiers and sailors. This transformation doesn't happen overnight and it is fascinating to get inside the characters' minds to see how they rationalize their evil deeds. As a reader, you will hope that the good guys win in the end, but you honestly don't know until the last few pages. It is a classic military thriller that will keep you engaged with its fast pace, dashing protagonists, and unlikely twists and turns. My only question was: what happened to the journalist who also fell prey to the evil military superiors? On to the sequel to find out: For Duty and For Honor!
Read more
One person found this helpful
Helpful
Report abuse

Amazon Customer
5.0 out of 5 stars The plot will keep you turning pages trying to figure out what comes next!!!
Reviewed in the United States on December 14, 2017
Verified Purchase
If you ever wondered how the U.S. military could concoct a coup against a sitting president, The Coronado Conspiracy tells the tale. It's a great story about senior officers in the Army who decide that the president, through word and deed, wants to fundamentally change the U.S. military in a way they don’t approve. The story woven by fellow Naval Aviator and helicopter pilot George Galdorisi’s includes cunning and deception by the plotters along with incompetence, personal agendas and stupidity by other officers and politicians. Its only through the dogged persistence by Peters and Holden while they try to figure out why a major drug raid leaves 136 American soldiers, sailors and Marines dead that the truth comes out. It takes Rick Holden, a Navy SEAL now working for the CIA and undercover as, guess what, a Navy SEAL and a Laura Peters, a young Naval intelligence officer to figure out what’s happened and bring it to the Congress before the President is impeached. It's a helluva story that’s realistic and in it, you’ll learn about what it takes to remove a sitting president. The Coronado Conspiracy will keep your reading lamp on well into the night and it may cause you to wonder about if something like this could really happen. Buy it, read it and you’ll be glad you did.

Thomas M. Wing
5.0 out of 5 stars First class thriller!
Reviewed in the United States on October 22, 2019
Verified Purchase
Captain Galdorisi paints a frightening picture of what could happen given the confluence of a few evil men in positions of power. But he also shows why such a plot would likely fail. His admonishment that the military is where we NEED men and women of honor and integrity to serve should be heeded. For it is those men and women of all ranks who can ensure that such a scenario could not come to pass.
Read more
One person found this helpful
Helpful
Report abuse

Kevin Miller
5.0 out of 5 stars Authentic Action that kept me Turning the Page
Reviewed in the United States on November 28, 2017
Verified Purchase
George Galdorisi, in a convincing fashion, lays out an authentic scenario that is relevant for today. He not only puts you on the bridge and in the cockpit, but provides insight into the world of 4-star command and how hard-ball politics is played there. It is full of Washington intrigue with deception, betrayal, and misguided loyalty. The heroes and villains are authentic and the combat scenes convey the fog-of-war confusion that can lead to disaster. A fun read, and thought provoking too.
Read more
2 people found this helpful
Helpful
Report abuse

Tim
5.0 out of 5 stars Fantastic Novel
Reviewed in the United States on August 25, 2017
Verified Purchase
This is my first time reading this author's work, but certainly won't be my last. The story was fascinating and extremely compelling to read, and I would love to see more with Holden and Peters. Highly recommended!
Read more
5 people found this helpful
Helpful
Report abuse

K McD
5.0 out of 5 stars MOVE THIS ONE TO THE TOP OF YOUR READING LIST!
Reviewed in the United States on September 18, 2017
Verified Purchase
Of all the George Galdorisi books out there, this one is still my favorite. The 2017 edition is an updated re-release of his first novel (published in 1998), and even if you’ve already read the original, you will not be able to put this one down. As good as the 1998 book was, the re-release is exponentially better. As a former naval officer, it stands to reason that I would love this book; but my wife, who generally balks at military books and movies, loved it even more than I did! Bottom line—it’s a powerful read for anyone who appreciates action, intrigue, and suspense woven into a well-written storyline, one that is chock-full of compelling characters, all of whom are embroiled in a continually twisting plot that could have been lifted from today's headlines.
Read more
2 people found this helpful
Helpful
Report abuse

Les
5.0 out of 5 stars Excellent story.
Reviewed in the United States on November 1, 2017
Verified Purchase
This is very well written and thought out story. It kept my attention thoughout. The only issue I can raise with it is that the actions and the progress ( temporarily) of the antagonists irritated me so much that I had to stop reading several times. That is not a complaint, but rather a tribute to an highly effective author. Highly recommended.
Read more
2 people found this helpful
Helpful
Report abuse
See all reviews