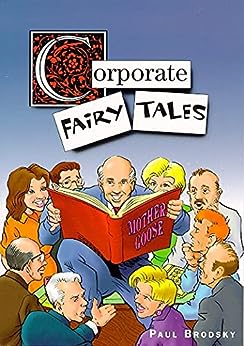 "Corporate Fairy Tales" is a cute 64-page book giving a new outlook on the corporate world and how we as a society have been mislead by children's fairy tales.

Safe, light-hearted humor is the key to keeping co-workers in good spirits, according to Brodsky. Keeping that in mind, he based his book on children's stories and nursery rhymes.

We are introduced to The Pied Piper of Excellence, Goldstein and the Three Lawyers, the Lowly Employee, The Little Accountant That Could, and many other transformed fairy tale characters.

"The premise is that these are nice stories to hear as a child, but they don't seem relevant to adults", said Brodsky. "I decided to update them with new, humorous 'lessons' that apply to the business world."

"Corporate Fairy Tales" will easily fit in a briefcase for a quick read between power takeovers. The book will give comic relief from the day-to-day stress and frustrations faced in the workplace. -- Mason Canyon, Rome News-Tribune in Rome, GA

Good for light, quick reading and a businessman's chuckle is this slim book which takes well-known children's fairy tales and adds a corporate twist. From the trials of a very large company called Gruff, Inc. to "The Little Accountant That Could", this will add humor to many an otherwise dull day. -- Midwest Book Review

I wish I had grown up with this book. -- The guy at IBM who said PCs were just a fad

Paul Brodsky has decided it is time for Little Red Riding Hood and Goldilocks to grow up. With that notion, he has modernized some of our favorite childhood fairy tales and changed the setting to reflect today's business world.

The satire is stinging, and quite funny, in these stories. Anyone who has ever dealt with or been employed by a corporation will find something to laugh about here.

The author notes that if you enjoy reading the Dilber comic strip, this will make a welcome addition to your library. -- Grand Paraire News in Arlington, TX --This text refers to an out of print or unavailable edition of this title.

On the Fifth day of business a customer gave to me,
five stolen credit cards,
four stupid complaints,
three returned items,
two bounced checks,
and a dollar that I hung up on the wall.

From "Goldstein and the Three Lawyers"

As far as you're concerned, the following story is true but the names and facts have been changed so they in no way resemble anyone you know. However, if any of the characters in this story appear to be someone you know, they probably are. The coincidence will be too great to ignore and you should act upon it immediately in an appropriate manner.

Once upon a time, in a land far far away, where the corporate world is a tough, brutal, environment and internal politics are an everyday battle, (OK, so maybe it's not so far away) there were three lawyers; Papasky, Mamartin, and Baborski.

On this particular day they were hard at work (uh.....yeah) lawyering or whatever it is that lawyers do when they're not appearing on Court TV. Suddenly, they decided to go off and have their usual three- martini power lunch and maybe chase some ambulances for exercise.

Not long after they had gone, Rubin Goldstein, an energetic new recruit from the mailroom, came by looking for extra interoffice envelopes so he could send out a chain letter. Upon entering the reception area of the lawyer's offices he noticed that everyone was gone and thought this would be a good opportunity to learn more about this crazy, clear cut, precise world that we call the `writ of habeas corpus' (because that sounds better than just saying law).

The first thing young Goldstein noticed was the three diplomas hanging on the wall. All the major universities were represented. The Evelyn Wood School of Law (you get your degree in half the time), The Congressional School of Ethical Law, and the Emanuel Kant School of Legal Awareness. After staring in awe of the diplomas for a while, Goldstein noticed that they all seemed to be a little crooked (.....think about it.....). Being the spunky young lad that he was, he decided to straighten them out a bit (something we would all like to see happen). The first two were easy to fix but as soon as he touched the third, it fell off the wall and the frame broke. Not sure what to do, he just left it and moved on..... --This text refers to an out of print or unavailable edition of this title.

4.0 out of 5 stars
4 out of 5
1 global rating
How are ratings calculated?
To calculate the overall star rating and percentage breakdown by star, we don’t use a simple average. Instead, our system considers things like how recent a review is and if the reviewer bought the item on Amazon. It also analyzes reviews to verify trustworthiness.