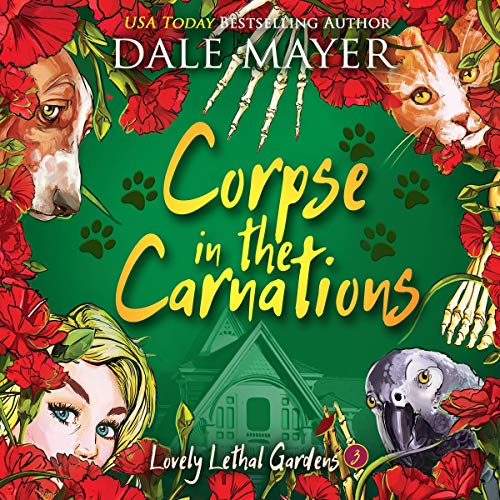 After getting involved in two murder cases in the short time she’s lived in picturesque Kelowna, divorcee and gardener Doreen Montgomery has developed a reputation almost as notorious as her Nan’s. The only way to stop people from speculating, is to live a life of unrelieved boredom until the media and the neighbors forget about her. And Doreen aims to do just that with a tour of Kelowna’s famed Carnation Gardens. Plants, more plants, and nothing whatsoever that anyone could object to.

But when she sees a fight between a beautiful young woman and her boyfriend, she can’t help but be concerned. Concerned enough that she follows the couple out of the parking lot and through town. And when gunshots interrupt the placid afternoon, it’s too late to worry about how her nemesis, Corporal Mack Moreau, will feel about her getting involved in yet another of his cases.

With bodies turning up in the carnations, and a connection to a cold case of a missing child from long ago, Doreen has her hands full, not least with trying to keep her involvement in the investigations a secret from her Nan, Mack Moreau, and especially the media. But someone’s keeping up with Doreen’s doings…and that someone can’t afford for her to find the answers to the questions she’s asking.

Your audiobook is waiting!
Learn more about membership
List Price: $19.95
You Save: $6.96 (35%)
By completing your purchase, you agree to Audible’s Conditions Of Use
Sold and delivered by Audible, an Amazon company

Yumi Kodama
4.0 out of 5 stars Only because of the stupid protagonist, I am not sure I am paying 5 bucks for this series...
Reviewed in the United States 🇺🇸 on July 18, 2021
Verified Purchase
When I read the first one, I did not like and I could never empathize with the protagonist. However, this is a cozy mystery, and animals are so cute, and it was free, so why not? I decently liked it.

When I read the second book, which was 3 bucks? I found myself getting sick of this stupid supposedly good-looking useless, worthless protagonist. And somehow, the author tries to emphasize her stupidity and incompetence.

Now, the third book, I am even more sick of this stupid worthless protagonist, but again, the story is very good, the plot is great, and all characters EXCEPT the protagonist are amazing. More than anything else, the three cute animals are just amazing. I love them.

The next one costs 5 bucks... overall, I am not sure if it is worth 5 bucks... I love love love the animals, and I really like all other characters...but the stupid protagonist...
Read more
One person found this helpful
Helpful
Report abuse

TammyAmazon Customer
4.0 out of 5 stars Book three of the Lovely Lethal Gardens series.
Reviewed in the United States 🇺🇸 on May 31, 2021
Verified Purchase
I love this series. Book three of the Lovely Lethal Gardens series. Should be read in order. Fun characters, Fantastic animal trio. Doreen has so much going on my own head is spinning. Someone is breaking into her home for antiques. Another cold case around a creak find. She witnesses a couple arguing only to see her dead body later. It is fun seeing her turn her life around and starting over. This series still has the right mix of cozy mystery, humor, romance with bonus animal interaction.
Read more
Helpful
Report abuse

wendy s hodges
5.0 out of 5 stars Murder and mystery heaven
Reviewed in the United States 🇺🇸 on January 30, 2019
Verified Purchase
Mysterious and full of surprises, I love how Doreen thinks outside of the usual boxes and researches her hunches to work out the puzzles. Along with her trusty threesome both helping solve, highlight something she needs to know or just simply protecting her, the bond between the four of them is getting stronger and stronger. Plus the gorgeous Mach is on hand as the voice of reason or command as the scene determines, the sparks are building. Only inconsistency I have noticed between the three books is regarding the house, I know the legal transfer was being done but somehow the confirmation and receiving of transfer hadn't been mentioned until about half way through this one, I don't know maybe I just missed it in all the excitement of bodies and items being found all over this town. I am loving this series though, it is new and fabulous a really great reading experience. I get lost and completely enthralled in the reading, I find myself chuckling often and holding my breath at other times. Well worth the five stars and more.
Read more
One person found this helpful
Helpful
Report abuse

Rhonda Jones
5.0 out of 5 stars So Good
Reviewed in the United States 🇺🇸 on April 14, 2020
Verified Purchase
Wow, Doreen is involved not only in a current case, which she was sort of a witness to. Well, she heard the shots fired at least. But she is also looking into the cold case of a missing little boy. She asked the local retired antique dealer to estimate some antiques in the house and furnishings her grandmother Nan have her. Come to find out the antique dealer's grandson had thought to be kidnapped and never found some 30 years ago. Doreen is hopping in this book, trying to find ways to make money while also working on a current and a cold case. Love This Series. The author gives so much more than just one murder and a romance. These are great mysteries.
Read more
Helpful
Report abuse

Betty Louise
5.0 out of 5 stars A Good Read
Reviewed in the United States 🇺🇸 on February 16, 2019
Verified Purchase
The third book of the Lovely Lethal Gardens series is more of the same as the previous books. One thing I admire about Doreen is her POSITIVE attitude as thing go wrong and causes her more troubles. Doreen is looking for ideas to add to her beginning garden business. She learned the tho town of Kelowna is asking for bids on it carnations plantings. Doreen is checking the ability of carnations and prices when she overheard an argument between two people. Her curiosity is strong enough for her to get involved in the situation. She found the girl dead in a carnations planting and becomes a nemesis to Mack investigation. She leans the Nan's is full of antique of value and as rumors spread someone is trying to break into her home. Mack comes to aid and places a temporary securities measures. The animals and the situation provided a lot of humor and I found myself laughing. I ready to read the book that will be published in April.
Read more
Helpful
Report abuse

Phil & Michelle Ward
4.0 out of 5 stars A Gray area topic
Reviewed in the United States 🇺🇸 on April 14, 2021
Verified Purchase
Definitely not a popular topic but it was a good book
Read more
Helpful
Report abuse

Jan from Pgh
5.0 out of 5 stars Dale Mayer Lethal Garden
Reviewed in the United States 🇺🇸 on December 5, 2019
Verified Purchase
This series by Dale Mayer (Lethal Gardens) is very entertaining. The problem is, I can read faster than she can write them. Waiting patiently for the February release of the next book. Very multi-faceted story line. Love the animals. Probably my favorite of all time. And I read A LOT. I purchased the first 7 books in paperback for my girlfriend as a Christmas present. My other girlfriend and I are reading the series on our Kindle's. Now we can all discuss when we go to lunch.
Read more
Helpful
Report abuse
See all reviews

Fluffyfangs
5.0 out of 5 stars Loving the mysteries with the menagerie
Reviewed in the United Kingdom 🇬🇧 on October 1, 2019
Verified Purchase
Can’t put these oils down what a series loving the character development and all the twists and turns. Plus loving how Doreen is growing in confidence and bonding with her family 💖💖💖
Read more
One person found this helpful
Report abuse

Eastbury
5.0 out of 5 stars Brilliant
Reviewed in the United Kingdom 🇬🇧 on May 7, 2019
Verified Purchase
I read almost everything this author writes. I enjoy romance and detective stories and this book / series combines these two elements. Wonderful
Read more
Report abuse

Eleanor Shaw
4.0 out of 5 stars Enjoyable read
Reviewed in the United Kingdom 🇬🇧 on January 31, 2019
Verified Purchase
Enjoying this series so far and am looking forward to the next three , finding the animals and the characters funny in the series an enjoyable and lighthearted read
Read more
Report abuse

Lynette Butler
5.0 out of 5 stars Corpse in the Carnations by Dale Mayer - another great read !
Reviewed in Australia 🇦🇺 on May 30, 2021
Verified Purchase
I love the way Dale can enable me to feel like I am actually there. The interractions between Mack, his Mother and lots of other people is amazing, as I feel like I am there with Doreen, during each encounter. The plot is good, and flows along seamlessly. I get the feeling that there is a growing respect and love between Mack and Doreen, and will happily read ALL of Dale's books to find out if I'm right. Great read, so get on it now !!
Read more
Report abuse
See all reviews