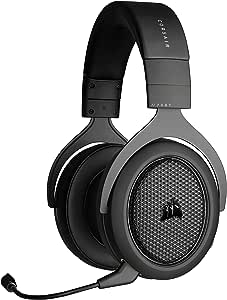 Visit the Corsair Store
4.4 out of 5 stars 90 ratings
| 14 answered questions

Connect to wired gaming audio on Switch, PS5, PS4, Xbox Series X|S, Xbox One or PC and get Bluetooth audio on your mobile device, including voice chat apps, music, or phone calls at the same time. With 30 Hours of battery life you can play long into the night without needing to stop.

On-ear volume and mute controls enable on-the-fly adjustments without distracting you from your game.

High-quality, custom-tuned 50mm neodymium audio drivers deliver the range to hear everything you need on the battlefield. Enable Windows Sonic on PC for an immersive 360° audio experience that puts you right in the middle of the game.

YOUR SETUP AT YOUR COMMAND

The CORSAIR HS70 BLUETOOTH Gaming Headset delivers both comfort and quality with memory foam ear pads and custom-tuned 50mm neodymium audio drivers, built to last thanks to its lightweight and durable construction. Connect to Switch, PS4, Xbox, or PC with high-fidelity USB or 3.5mm for game audio while simultaneously connecting to your mobile device with Bluetooth for chat.

4.4 out of 5 stars
4.4 out of 5
90 global ratings
How are ratings calculated?
To calculate the overall star rating and percentage breakdown by star, we don’t use a simple average. Instead, our system considers things like how recent a review is and if the reviewer bought the item on Amazon. It also analyzes reviews to verify trustworthiness.
Top reviews

Chris S
1.0 out of 5 stars Horrid experience
Reviewed in the United States on November 30, 2020
Verified Purchase
This "wireless" headset has a microphone that only will work when WIRED. So unless you plan on sitting within 6 feet of your pc, this a a giant loser of a headset. Shame on corsair for not making it clear that this is a WIRED headset, this a small wire. Will never buy another cosair product, and will immediately be returning this garbage. UPDATE, went and wasted 12 dollars on a 12 foot 3.5 cable, Does not work using it either, only works through usb. WORST PRODUCT EVER, BUY SOMETHING ELSE. You are welcome
Read more
6 people found this helpful
Helpful
Report abuse

As other reviewers have mentioned, this is not actually a full-featured wireless headset.

I expect most people will be using these to connect (wirelessly) to their PC, XBox, PS, etc and expect to use the mic directly - but they will be sadly disappointed.

I connected to my PC via Bluetooth and while the headphones and mic show up as available devices, you will not have use of the mic. Only way to use it is wired, which defeats the purpose for most people, I would think.

Reading the description "wired with Bluetooth" led me to believe that you could connect one way or the other. Shame on me.

What an odd niche to try and fill.

UPDATE - So I have been back and forth with Corsair since purchasing this headset (great support, btw - 10 out of 10 for this) - they never led on that the mic would not work across Bluetooth, but everything we tried had no effect.
Today I installed a new Logitech mouse on my system - previously had a Corsair unit with their software installed. After uninstalling the Corsair mouse software, the mic started working across Bluetooth.

At this point, I don't even care why or how, I'm just happy it now all works. So if you purchased this unit and have the same issue with the mic not working, toast all Corsair software installed and try again.

I have updated my rating to reflect this.

UPDATE #2 - Turns out the mouse software was a red herring. The headset stopped working again shortly after. After much trial and error, it turns out the Intel Bluetooth adapter for my PC was the problem.

Dug up an old BTv2 adapter and the headset connected flawlessly each time - until I actually tried using it. The audio was horrible, output was very tinny and shallow. Input was just as bad, and dropping out often.

Thinking this might be an issue with the BT dongle, I purchased a new BTv4 dongle. No change in performance, audio is still terrible. Looks like these guys will be going back, unfortunately. Once again updating my rating.

Steve Friederang
5.0 out of 5 stars Excellent sound with great comfort and a decent mic
Reviewed in the United States on January 10, 2021
Verified Purchase
I absolutely love this headset. I ordered it after looking at many reviews online and it appears that it has been revised or this package just comes with more features. I thought it had micro-usb, but I am happy to report it charges via usb-c and came with a high quality braided cable. The included aux cable is very nice and flexible and also braided, but be sure to follow the directions to plug the headset end into the headset. I forgot to do this and was having some weird audio issues with the microphone until I corrected it. It also came with a microphone wind cover (the foam thing on the mic) that completely gets rid of the issues some people were having in windy conditions or when they speak loudly.

The sound quality is amazing for the price point, with clear highs and good bass. It won't blow you out of the water like a proper surround sound system with high-end speakers will but it sounds very good and I really like listening to music on it. For a comparison it is most definitely ahead of AirPods in sound quality, so if you are looking for a good headset and like AirPods quality level this will be a good upgrade. I haven't had a battery issue yet because I haven't run it all the way down, but I've heard it lasts about 15 hours.

Comfort is best in class. It lists snugly on my head and won't fall off easily, without pressing my head like a vice. The metal construction for the headband is very strong and I don't think it will lose it's ability to stay snug on my head anytime soon, but I'll update this if it does. Build quality is phenomenal, it is very sturdy, all foam pieces feel thick and I know they won't compress with time. I feel the headband on my head but it is very light and won't become uncomfortable or anything after long play sessions. The only issue is if you run hot the fake leather ear cups may become decently hot after a while, but I'm just sitting in my room with the fan on and it doesn't happen to me. Might not be fun in the summer heat though.

The looks of it are great, it doesn't look like a gamer headset or anything and I love that the mic is detachable for when I don't want it. I really like the matte black look and it just looks really nice and feels high-quality in person.

The microphone is good, albeit not the best it could be. My friends have no problem hearing me and I sound clear, the sound just sounds slight robotic and makes my voice somewhat lower and slightly flatter when it loses some of the high notes. I hope future iterations will be upgraded since microphone components aren't incredibly expensive and quality would benefit greatly. If Corsair decided to be really nice they could even sell a better microphone since it is detachable, but I doubt that will happen.

A lot of users had reported the microphone not working when using Bluetooth, but whether it's the updated version or whatever, it works perfectly fine for me. I can make phone calls from my phone perfectly fine using Bluetooth. Although, at least on iOS and macOS, only the play/pause of the multi-function button work. You're supposed to be able to double and triple click for skip/previous, but all that does is pause it for me, so hopefully that gets fixed. Another thing that would be nice with a firmware update is adding support for battery indicators in iOS and android operating systems, and making it easier to view in the iCUE app on computer. It would be really nice to look at the connected device and know what it's battery is since it doesn't have a button to say the battery level or something like some headphones do.

All in all, this is a really nice headset that is very worth it if you have the money. With great sound, excellent accessories, and amazing comfort and build quality, it will be hard to find a competitor to this headset.
Read more
One person found this helpful
Helpful
Report abuse

jacob r.
3.0 out of 5 stars WIRED HEADPHONES!
Reviewed in the United States on December 2, 2020
Verified Purchase
I love wireless headsets for gaming, these are not that. as a consumer its up to us to do our research but that doesn't excuse corsair for how they sell these as "bluetooth". even console plebs don't use their phone for chat... on that note, it doesn't work with my computer bluetooth or phone.

with that being said these have strong sound not great, the mic is crisp and theres a foam pop filter they include to cover the mic if you like. very comfortable and will work with a wireless controller because it gets its sound and mic from the controller. my nephew will be very happy to use these and corsair just made more money as ill be buying more headphones. thanks corsair...
Read more
2 people found this helpful
Helpful
Report abuse
See all reviews