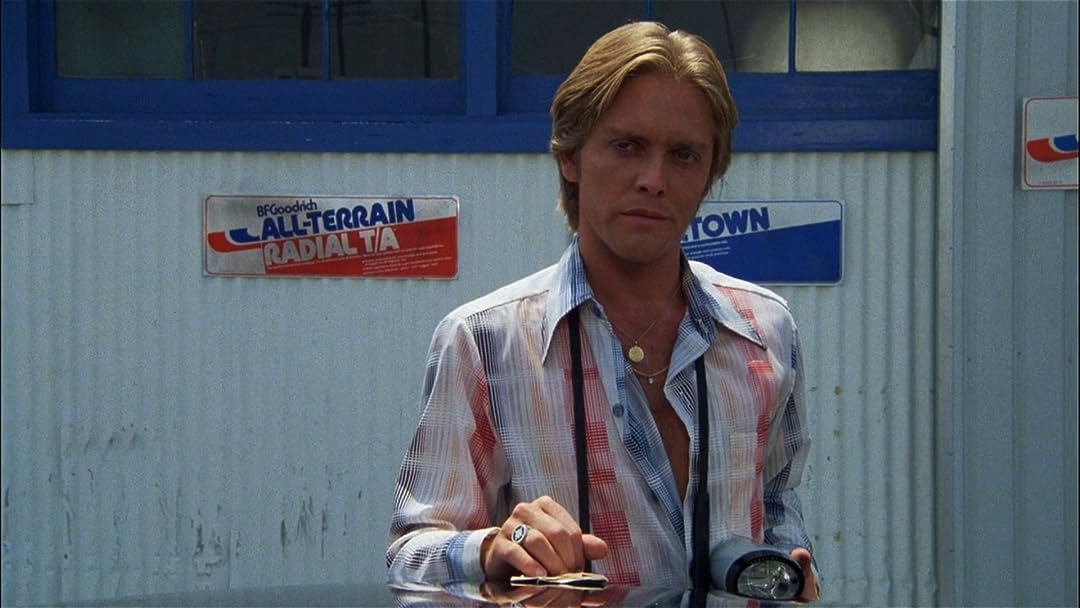 (2,032)5.71 h 44 min1978PG
Mark Hamill ("Star Wars") heads towards Vegas in pursuit of a stolen Corvette he built. He's helped along the way by a sympathetic runaway, portrayed by Annie Potts ("Designing Women").

Allen Garfield's #1 fan.Reviewed in the United States on September 3, 2021
4.0 out of 5 stars
Classic 70s road movie; WB bluray
Verified purchase
The Warner Archive has released a new edition of Corvette Summer and the movie, while not a major hit, looks great on this Blu-ray disc.

Mark Hamill, fresh from the incredible success of 1977’s Star Wars, stars as a Southern California high school senior who is quite the auto mechanic and restoration expert. He plays Kenny, a teenage car aficionado with a special place in his heart for Corvettes. His passions lead him to fix up a 1973 Corvette Stingray in his auto shop class with the help of his classmates, and together they create one spectacular ride. Candy apple red and featuring incredible modifications including the steering wheel being moved to the right side, it is a sweet ride. Unfortunately, it doesn’t take long before the car is stolen, so Kenny, distraught over losing the only thing in the world that meant something to him, puts out all his efforts in getting the vehicle back. A tip leads him to Las Vegas, where he connects up with a fledgling hooker, Vanessa, who helps him track down the Stingray before it gets away for good.

The plot is paper-thin and none of the characters are able to maintain any consistent qualities. The real star is that very cherry Corvette that endures two paint jobs, rough handling on the road and a general lack of respect by the thieves.

If you watch carefully during Mark Hamill’s close-ups it is possible to see evidence of his January 1977 near-fatal car accident. As a result, he suffered a fractured cheekbone and a broken nose while crossing several lanes of traffic in his BMW. Doctors were able to correct the damage by removing cartilage from his ear to repair his nose. Despite the surgeons’ best efforts, Hamill was left with some minor scarring. Make-up hid most of the effects of the crash, but you are able to see evidence of it in brightly lit scenes. The next year, while filming The Empire Strikes Back, George Lucas explained the scars by adding Luke Skywalker’s encounter with the Wampa monster in the ice cave on Planet Hoth.

Corvette Summer includes the proverbial hooker with a heart of gold played by a young Annie Potts in her first movie role. She is the most likeable member of the cast. Potts actually attempts several jobs along the way including fast food worker, casino dealer and soft-core porn actress. None of these scenes are too graphic as this is a PG-rated film. At one point a scantly dressed Vanessa asks Kenny to spend the night in her trailer. After learning he is a virgin, she lays back on the waterbed and tells him “Forget kissing, let’s screw.” That line would certainly not pass muster with the PG rating today. Before PG-13 came along in 1984, the old PG classification allowed for some fairly strong violence, language and adult themes. I remember seeing the comedy Silver Streak at the theater back in 1976. While traveling on a train, Gene Wilder and Jill Clayburgh share a love scene in their coach and included was a fairly racy shot implying Wilder enjoying a bit of oral sex.

A plethora of terrific character actors make appearances including Dick Miller, Danny Bonaduce, Philip Bruns, Eugene Roche, Wendie Jo Sperber, T.K. Carter and Brion James. James is best remembered as the nasty replicant, Leon, who kills the first test administrator in Blade Runner. Dick Miller is his usual memorable self as a lucky gambler who helps Hamill out of a jam. Eugene Roche plays the kind of high school teacher who always looks out for his students. There is a plot twist involving Roche near the end, though, that you don’t see coming.

Corvette Summer was scripted by Hal Barwood and Matthew Robbins, who also wrote or directed popular films such as Dragonslayer, Warning Sign, MacArthur, *batteries not included and The Sugarland Express. Corvette Summer doesn’t offer much backstory or motivation for Hamill or Potts. There is more needed in the way of plot developments and better characterizations. It’s basically boy restores car, boy loses car and boy attempts to get car back.

The sharp Technicolor cinematography was the work of Frank Stanley and his efforts are especially apparent during the scenes in Las Vegas. This was the older Strip from the 70s and the bold neon signs looked spectacular. I was reminded of the Vegas shots from the 007 film Diamonds Are Forever.

Craig Safan, a lesser known but very talented film composer, provided a spirited score that added energy to the stunt driving scenes. This film was prior to his best known work in The Last Starfighter and Remo Williams: The Adventure Begins.

The fights and car chase sequences were staged by veteran stunt coordinator Buddy Joe Hooker who also served as second unit director. He took care to make sure the Corvette was not damaged during shooting.

I always find it interesting that no one seems to drive on the Interstate in road or chase movies. No matter how fast they need to travel, the characters in these films always take the two-lane secondary roads. Some directors find ways to rationalize this aspect of a film. In Rain Man, for example, director Barry Levinson explains this by revealing Raymond Babbitt’s (Dustin Hoffman) fear of large highways. The reason for smaller roads is most likely the difficulty in shutting down major expressways for filming.

Corvette Summer enjoyed moderate success for MGM during the summer of 1978 as it played in most of the finer drive-ins and second-run houses across the country. It served as a stepping stone for director Robbins, screenwriter Barwood and actress Potts as they all enjoyed successful careers in Hollywood.

The Blu-ray from Warner Archive features the usual excellent video quality, crisp mono sound and clean, clear dialogue. There is moderate grain, typical for the era. Subtitles and a theatrical trailer are the only extras, but one should be grateful that distributers are willing to restore and release lesser-known films in such beautiful editions. Corvette Summer is a great little film for a rainy day when one is nostalgic for 70s car movies.

C. Andrew HesslerReviewed in the United States on October 7, 2018
1.0 out of 5 stars
Don't waste your time
Verified purchase
This is a waste of a movie. It's about a teenager obsessed with his car. It's not about corvettes. It's not about love. Raunchy in parts...pathetic in most. Just skip this one. You'll be better off for doing so. If you like Mark Hammil in Star Wars...just watch Star Wars. This is just not worth watching. Sorry...
7 people found this helpful

Amazon CustomerReviewed in the United States on March 1, 2017
5.0 out of 5 stars
Corvette Summer a good fun movie for everyone
Verified purchase
This is a great popcorn movie. Lots of fun to watch. Mark Hamill does a great job in this film playing obsessed Kenny who is in love with the Corvette he fixed up. And the car is a sweet looking car also. This is a no brainer movie if you just want a few laughs and relax withy a blow of popcorn and enjoy a nice fun summer movie.
11 people found this helpful

GomegelusReviewed in the United States on August 3, 2016
5.0 out of 5 stars
A Nostalgic Purchase
Verified purchase
This was a nostalgic purchase for me. I had seen this movie at the theater back when I was 9 years old with my brother and cousin. Star Wars had come out the year before, so Mark Hammill was a hot property. Seeing it again, I realize that I didn't really understand most of what I was watching back then. All I remembered was the really cool car and Mark Hammill trying to get it back. I didn't even remember Annie Potts being in the movie. Regardless, it was a fun movie.

For the record, the movie arrived quickly and the packaging was in good shape. No damage to the product. Great purchase.
15 people found this helpful

BequetteReviewed in the United States on January 31, 2021
3.0 out of 5 stars
The only film Mark Hamill made between Star Wars and Empire Strikes Back.
Verified purchase
This is a perfectly adequate movie about a teenager obsessively searching for a stolen car. It is most interesting because it features Mark Hamill in his only film role between Star Wars and the Empire Strikes Back. The movie is better than the Star Wars Holiday Special. It is not as good as his appearance on the Muppet Show. The film is also interesting for being the first film appearance of Annie Potts.

Jeffrey CheckReviewed in the United States on December 29, 2016
5.0 out of 5 stars
Great movie terrible car, horriblly slow car...
Verified purchase
This movie shows you exactly why Mark Hamill is awesome. The way he attaches himself to the car is so obsessive it makes everything else in his life disappear.. his bad family, his lack of success so far in school.. and when the car gets stolen he goes psycho and the only thing that saves him is Annie Potts as Vanessa.

She not only makes him realize there is more to life than a car.. she is a stunner and there are so many cringe worthy parts where you are feeling the stress..

Author, Pete AdamsReviewed in the United States on June 28, 2021
5.0 out of 5 stars
So bad, it's good!
Verified purchase
We all know him as the awkward guy with mind powers, which is probably where he should have stayed, but I love this movie. It's supposed to be suspenseful, but it's really a great comedy. Annie Potts as a wannabe hooker does such a great job of keeping the film light and funny. If you're into nostalgia and just want to delve into old school cinematography, and you can get it cheap, try this out, even if just for the laughs!

Movies Are CinemaReviewed in the United States on October 3, 2019
3.0 out of 5 stars
Corvettes May Hold Their Allure, but This Film Does Not.
Verified purchase
Corvette Summer has simply not held up through the years. Annie Potts handles her role OK, though a bit to the nutty side, while Mark (Star Wars) Hammill seems out of sorts with his acting on "excess" mode. I probably enjoyed this much more when it first hit theaters, but years later I find it a bit boring in places, and reeking of over-acting.
See all reviews
Back to top
Get to Know Us
Make Money with Us
Amazon Payment Products
Let Us Help You
EnglishChoose a language for shopping. United StatesChoose a country/region for shopping.
© 1996-2021, Amazon.com, Inc. or its affiliates