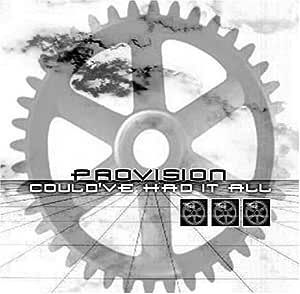 Could've Had It All

PROVISION is a Synthpop act from Texas that released their own debut album in 2001 called "Evaporate," which received positive reviews and critical acclaim from the Synthpop community. The band has been very active with live shows and has become known as one of the hardest working and most exciting new electronic pop bands from America. PROVISION now joins A Different Drum's label for their new releases, beginning with this excellent single which features 4 versions of the title track, including mixes from B! MACHINE and DAYBEHAVIOR, plus two exclusive bonus tracks that won't be included on the album. It's a great single for collectors and Synthpop fans that enjoy a sound similar to bands like RED FLAG, CETU JAVU, or mid-era DEPECHE MODE.

Daniel W. Kelly
5.0 out of 5 stars excellent remixes and b-sides for this synthpop act that could've been big in the 80s
Reviewed in the United States on June 4, 2008
Verified Purchase
For those still itching for the sounds of Red Flag, Anything Box, Celebrate The Nun, and Cause & Effect, this is a modern band that practically imitates the sounds of those bands from the period of 1989-1991, right before the demise of "new wave" synthpop. If you've collected the band's 3 CDs, your collection isn't complete without this single. The remixes of Could've Had It All don't stray far from the formula at all, retaining the synthpop quality of the original, the non-LP tracks are far from filler, being just as worthy of a listening as any of their album tracks, plus you get a remix of "Flood of Emotion", probably the weakest track on here. It's only 3 and a half minutes, and it's a breakbeat mix instead of a synthdance mix.
Read more
Helpful
Comment Report abuse